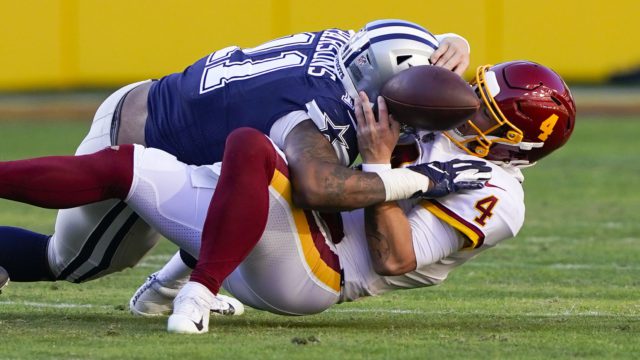 There is no doubt that Micah Parsons’ first season in the NFL was impressive. The Cowboys linebacker was key in the team’s defensive resurgence in 2021, apart from the fact that he broke the record for sacks for a rookie in the franchise. However, the rookie recently revealed a very important detail: he played the entire season dragging an injury.

This Wednesday, Parsons was interviewed during a live stream of Bleacher Report. There, the Penn State product was asked about the hardest thing he had to overcome during the season. And there, to the surprise of many, Parsons said that he played with a hyperextension in one knee.

According to the linebacker, the injury occurred during the joint practice between the Cowboys and the Rams in Oxnard. This was during Dallas training camp, shortly before the Hall of Fame game against the Steelers and the 2021 NFL preseason. And while Parsons revealed that the injury bothered him all season, he wasn’t about to step down.

“It was something that kept persisting”Parsons said of his injury. “When you hyperextend something, you need rest. But I thought: ‘I can’t rest’.”

Micah Parsons said on @BleacherReport live that he hyperextended his knee in the training camp practice with the Rams. Bothered him all season. “It was just something that kept lingering. When you hyperextend something it needs rest. But I was like, ‘I can’t take no rest.'”

With this, Micah Parsons became the second Cowboys player to reveal that he played injured during the 2021 season. The first was running back Ezekiel Elliott, who was known to have had a sore knee since Week 4. However After Dallas’ elimination in the playoffs, Elliott revealed that he had a partial tear in the anterior cruciate ligament in his knee. And while that injury could heal with rest, Zeke played the entire season. Of course, performing at a very low level.

However, the case of Parsons is totally different. The information about his knee injury took many by surprise, since at no point in the season was there any mention of it.

In fact, the only time Parsons was on Dallas’ injury report all season was in December. The linebacker was limited in some practices prior to the Week 14 game against Washington due to a sore hip. However, this did not happen to majors and the rookie was able to play normally that week.

Exhale: Cowboys LB Micah Parsons (hip) was added to the injury report today as limited participant, but sources expressed no concern. “He’s just sore,” one said. Another source: “He should be fine.”

Also, let’s also not forget that Parsons was sidelined with COVID-19 for the Week 18 game against the Eagles. This didn’t stop him from playing in the playoff game against the 49ers the following week. However, it could be seen during that game that the young linebacker needed to take oxygen between offensive series, this as a possible sequel to the virus.

Either way, Micah Parsons putting on the performance he did in 2021 while injured is pretty impressive. During the regular season, the Penn State product set these records: 84 combined tackles, 20 tackles for loss of yards, 30 quarterback hits, 13 sacks, three passes defensed and three forced fumbles. In addition, he had nine combined tackles and one tackle for loss in the playoff game against the 49ers.

But that was not all. With his 13 sacks, Parsons broke the Cowboys rookie record held by DeMarcus Ware. In addition, the linebacker’s performance earned him different awards, such as being chosen for the Pro Bowl and All-Pro, as well as different awards such as Defensive Rookie of the Year.

Plus, the Penn State product continued to display his competitiveness and insatiable character even after the season was over for Dallas. In his Pro Bowl run, Parsons took the game seriously, tackling opponents like it was the regular season. Additionally, the linebacker defeated Tyreek Hill (Chiefs) and Nick Chubb (Browns) in the Fastest Man race during the Pro Bowl Skills Showdown.

Cowboys LB Micah Parsons had one of the first signs of effort in Pro Bowl. pic.twitter.com/GzbEQpXMcg

Now, with that information about his injury, expectations around Parsons will grow for next season. Making a full recovery and training during the offseason at the Cowboys’ facility, the linebacker could come into next season in top form. Besides, the continuity of Dan Quinn as defensive coordinator ensures that Parsons’ abilities will be used to the fullest.

Without a doubt, Micah Parsons showed that he is quite a voracious and tireless player. And apparently tough enough to play the entire season despite an injury. It remains to be seen if the linebacker will surpass his rookie records in his second year in the NFL. And if so, the Cowboys can feel lucky to have selected him in the last Draft.

Micah Parsons reveals that he played injured during the 2021 season