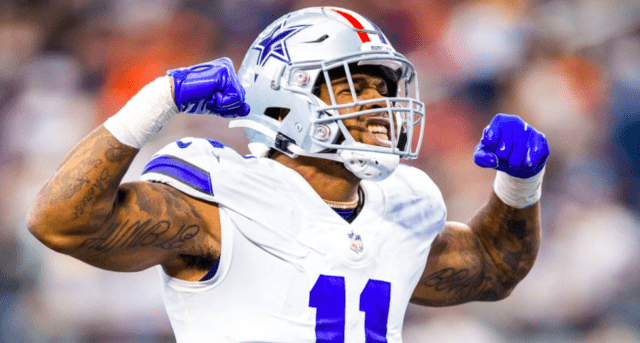 In his first year in the NFL, Micah Parsons proved to be an insatiable player. His phrase “the lion is always hungry” during training camp was a premonition of his performance throughout the regular season. Even his competitive spirit didn’t rest even in Pro Bowl week.

In general, the Pro Bowl is usually an exhibition game where the level of competition drops noticeably, and the players do not have the same level of aggressiveness as in a normal game. However, Parsons took the NFL All-Star Game very seriously. Last Sunday, the rookie recorded eight tackles in total, in addition to a hit on quarterback Patrick Mahomes.

Cowboys LB Micah Parsons had one of the first signs of effort in Pro Bowl. pic.twitter.com/GzbEQpXMcg

Micah Parsons getting a hit on Patrick Mahomes to end the first half pic.twitter.com/Pe4EDWycDW

But that was not all. In the days leading up to the game in Las Vegas, Parsons participated in the Pro Bowl Skills Showdown, where some of the participating players put his skills to the test. In the Fastest Man race, the Dallas linebacker competed against his teammate Trevon Diggs, as well as running back Nick Chubb (Browns) and wide receiver Tyreek Hill (Chiefs).

However, Parsons took this race seriously. So much so that, unlike the other players, he took off his shirt to participate. The Dallas rookie emerged victorious, beating even Tyreek Hill, considered the fastest player in the NFL. However, it was clear Hill wasn’t giving his best after playing in the AFC finals days earlier. And even though Parsons won the race, he acknowledged that Hill is the fastest in the league.

There is no doubt that Micah Parsons had a great rookie year. In the 2021 regular season he set these records: 84 combined tackles, 20 tackles for loss of yards, 13 sacks, 30 quarterback hits, three passes defensed and three forced fumbles. This earned the linebacker many individual awards, including his selection to the Pro Bowl and All-Pro. Besides, he’s the heavy favorite to be named Defensive Rookie of the Year this week in the NFL Honors.

However, Parsons is still hungry. He already has his mind set on next season, and his goal is clear: keep improving.

“I can improve anywhere”said Parsons in statements collected by ESPN’s Todd Archer. “I can become a better pass-rusher. I can be a better linebacker. I can do anything. I feel like I was out there raw, learning, growing and improving throughout the year. Nobody is perfect. There is always room to grow in many ways to keep improving”.

Much of Micah Parsons’ breakthrough in his first year in the NFL is due to Dan Quinn. The Cowboys defensive coordinator was able to take advantage of the versatility of the Penn State product, making him a pillar of the cowboy defense. Now, with Quinn’s continuity in Dallas already confirmed, the linebacker is expected to continue to grow and improve.

However, Parsons’ second year in the NFL will also have challenges ahead for the young player. Opposing coaches already know what the linebacker is capable of, and they might be ready to neutralize him. And that’s something the Cowboys’ coaching staff is aware of.

“We talked about what (Parsons) can do coming off his rookie season”said head coach Mike McCarthy a few days ago. “The biggest challenge is that he will have to get used to the changes that people make for him. We have to make sure he’s prepared. He is a challenge to any offense because of his ability to move around. Any player can attest to this: when you are successful, rivals study you to have a plan for you. So we have to make sure he can take the next step, fight and continue to be successful.”

Following the Cowboys’ elimination in the wild-card round of the playoffs, Micah Parsons took it easy. He limited his workload to sit-ups, cycling, and elliptical, among others. This, of course, until his participation in the Pro Bowl last week. However, the linebacker assured that after the Super Bowl he will start working hard, focusing on improving for the 2022 season.

Of course, getting to a Super Bowl is among the linebacker’s goals.

“That has been on my mind since I came to the league”Parsons told ESPN’s Todd Archer. “It’s sad how we were eliminated, but the opportunity and the potential are there. We just have to take advantage of that next year. I think we’ve got all the right parts, we’ll get smart parts this year and go from there.”

Of course, Parsons’ mentality and permanent “hunger” will be important factors in reaching that goal.

“I have never been a loser in my life”Parsons said. “I have always been a winner. I’ll get to a Super Bowl. I don’t know when or how, but I know being in a Super Bowl is in my plan and God’s plan for me.”

With the season almost over, some players will be taking the offseason to work on themselves and improve for the upcoming campaign. And there is no doubt that Micah Parsons will be one of those players. Expectations around the linebacker will be very high in 2022. However, Dan Quinn’s continued role as defensive coordinator may mean that Parsons’ potential and versatility will be put to full use.

Micah Parsons is already thinking about improving for next season