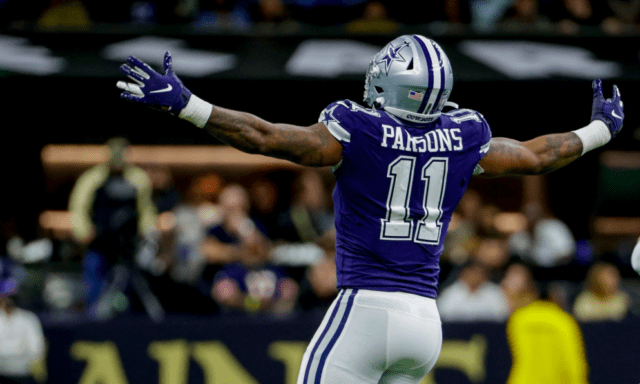 At the time that the Cowboys were going to make their respective selection in the 2021 Draft, they had number 10 and everything indicated that they would go for a defensive back. In any case, there was talk of Patrick Surtain II or, failing that, Jaycee Horn.

However, at the time of selection, the Carolina Panthers with the number 8 selected Horn and the Broncos with the 9 Surtain II. Forcing Dallas to make a quick trade to evaluate its options. After a move with the Eagles, they stuck with No. 12 and opted for linebacker Micah Parsons.

Now, the boy was seen as a great prospect to help a defense that left a lot to be desired last year. But perhaps few expected the great performance that the player would show in his first season as a professional.

So far, Parsons has managed 75 combined tackles, 12 quarterback sacks, three forced fumbles and two passes defended. He’s already at the top of the discussion to be the defensive rookie of the year and to top it all, he’s also in the talks to be the defensive player of the season. Two accolades that only one player has achieved in the NFL, and that is linebacker Lawrence Taylor.

Speaking of the latter, Parsons has received warm comparisons to him. For Giants running back Saquon Barkley, he affirms that the rookie cowboy has what it takes to absolutely achieve what he sets out to do. It should be noted that both Barkley and Parsons are very close thanks to their passage through Penn State.

“I’ve never seen anyone like him, if I’m honest, he looks a lot like Lawrence Taylor,” said the New York team running back. “It is what it is, it’s crazy. Every week Parsons is one of those guys where even though you’re not watching his game, I check and wonder what he’s doing. “

“I’m not saying this just because we’re friends,” the running back continued. “The sky is the limit for him. If you keep working hard and focus, you can be even better than you are right now. That’s the scariest thing about the whole thing. “

It is still funny the fact that it is Barkley himself who gives these statements about Micah when in a few days they will see their faces at MetLife Stadium. It will be something interesting to see this Sunday afternoon.

Now, coaches like Bill Belichick, who was the Giants defensive coordinator in Lawrence’s greatest moment of glory, as well as Bruce Arians, another coach with ties at that stage, have also agreed with the comparison.

Of course, Parsons himself is flattered by the situation. But he has commented on several occasions that he wants to have a proper name and that they make the comparisons rather with his person.

Another great aspect to highlight of his game has to do with the sacks of Mariscal. After two sacks to Taylor Heinicke at FedExField, Parsons now has 12 in total. And still with four games to go on the season, he’s about to break the record for most sacks by a rookie still held by Jevon Kearse. At that time, the latter achieved a total of 14.5 when he played his first year with the Titans in 1999.

Either way, Parsons has become a sensation on the team and there really remains the big question if there’s anything he can’t do. In addition to being a linebacker, he has also played defensive end while elements like DeMarcus Lawrence and Randy Gregory have been injured this season.

In fact, during his high school years, Parsons even played running back. Already in Penn State is that the player would make his transition to middle linebacker, and the rest is history.

If the Cowboys need any extra depth at running back, Micah Parsons (23) could probably help pic.twitter.com/bzp6LLvOxx

Micah Parsons is on the way to achieving great things and he has very little to do so. If this rhythm of production is maintained in the final stretch of the campaign, it would not be unreasonable to think that the boy will achieve both personal recognitions for his great performance in 2021.