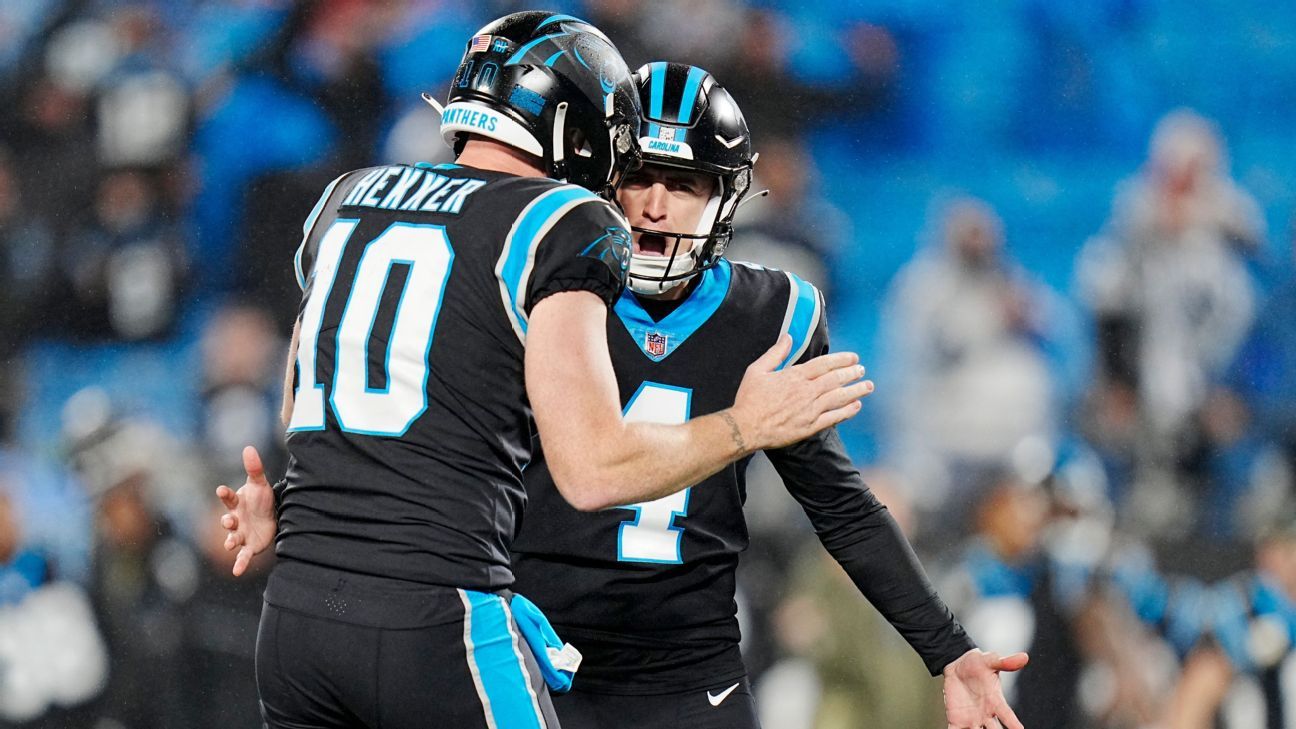 There is great excitement and anticipation among NFL fans for the Monday Night Football game that will take place at the Azteca Stadium on Date 11 (live coverage on Monday, November 21 by ESPN Sports: 7pm ET NFL Live from MexicoY 8pm ET 49ers-Cardinals in Spanish).

It will be a great celebration of the 17th anniversary of the league’s first international game, which was also in Mexico, and was also a matchup between the San Francisco 49ers and the Arizona Cardinals. It will be a great revenge.

Our task is to closely follow the 2022 season of Latinos on the gridiron, week by week. We continue!

the kicker Eddy Pineiro He is not the star of the week only because he contributed 13 of the 25 points in the victory of the Carolina Panthers over the Atlanta Falcons, 25-15, to start Week 10. He is also the star because with those 13 points Piñeiro redeemed himself from his dismal performance in Week 8, also against Atlanta, where he missed an extra point and also a field goal on time that helped cost the Panthers the game, who lost 37-34.

Last Thursday, Piñeiro made all four field goals he attempted and added one extra point, missing just one extra point attempt this time. His longest field goal was 49 yards; the others were 46, 40 and 37 yards — or all around or longer than the average NFL field goal distance in 2021, 38.6 yards.

Arizona interim head coach Steve Wilks praised the player of Cuban and Nicaraguan descent at the postgame press conference: “I can’t say enough about Eddy either,” he said. “Just a tremendous job on how he got back on his feet and bounced back, man. I’m very excited about him and the way his teammates supported him.”

Wilks continued, “He wasn’t nervous at all. … It says a lot about him as a person. You have to hit the reset button — everyone has to — and understand that that happens sometimes. But the way he came back this night, I’m very proud of him.”

The terrible conditions under which they played add value to the kicker’s performance. It was raining heavily, and at an irregular rate, from the remnants of Hurricane Nicole. The wind was blowing at 11 miles per hour, according to the game’s stats notebook, but there were gusts at times.

Pineiro would later tell team media, “That was definitely the worst game weather-wise I’ve ever had to play, and that includes (when) I played in Chicago, one of the worst places to kick.” He added, “It was windy. It was raining. There were gusts of wind. It was just unpredictable. It was terrible.”

The weather was terrible. Eddy Piñeiro and his footwork were brilliant.

This week we present you: The MNF Latinos of Week 11 (SF vs. ARI)

We anticipate that San Francisco 49ers linebacker, Fred WarnerProud of his Mexican background — on his mother’s side — and Panamanian — on his father’s side –, he will be playing on the field of Estadio Azteca this coming MNF to challenge the Arizona Cardinals. He’s always one of the standout figures on San Francisco’s defense. Don’t forget the Tijuana offensive lineman alfredo gutierrez, who is part of the Niners practice squad; For now, he is not contemplated to participate in the game, but anything can happen.

Unfortunately, the Cardinals player of Mexican roots who also speaks perfect Spanish, Will Hernandezwill not play for Arizona because of the pectoral injury he suffered during a 31-21 home loss to the Seattle Seahawks in the Week 9 game. It remains to be seen if the center max garcia (whose father is Mexican and whose mother is Puerto Rican), plays for the Cardinals on Monday; he’s a second string and hasn’t played since Week 6.

There are several other Latino players on the Cardinals roster: linebacker Tanner Vallejo, whose grandfather immigrated from Guayaquil, Ecuador to San Francisco (yes, the home city of the 49ers!), is a reliable presence on Arizona’s defense. Likewise, the cornerback El Boricua mark wilson He’s been in every Cardinals game this season, so we look forward to seeing him contributing at the Azteca.

Will any of them be the most prominent Latino of Week 11? We’ll see!

How Latinos played in Week 10 of the NFL

Latinos who did not play in Week 10 of the NFL

Just a week ago, linebacker blake martinez was our most outstanding Latino of Week 9 and a few days later, on Thursday of last week, he announced his retirement on his Instagram page, with the following message: “I am announcing my retirement from the sport of American football! I had a trip amazing with some amazing franchises and made lifelong friendships.I have chosen to step away from this career at this time to focus on my family and future passions!I am excited for this new step and thank all the fans and all the organizations that They have supported me throughout the years!”

Congratulations to two current NFL Latino free agents… Louis Perez Y Steven Montez They were two of 15 quarterbacks assigned in the XFL draft, which will resume in 2023.

The Mexican-American Luis Pérez will be under center again in the XFL, this time for the Vegas Vipers. He had played with the New York Guardians in 2020; he was doing pretty well, earning himself the starting job, leading the team to back-to-back wins in Weeks 4 and 5. But then the pandemic brought the season to a halt and the league shut down operations.

The quarterback who led Texas A&M-Commerce to the Division II national title comes with limited NFL experience. In 2018, he signed with the Los Angeles Rams as an undrafted free agent. He saw professional football action for the first time in a preseason game; he completed 8 of 15 passes for 43 yards with one interception in a 28-0 loss to the New Orleans Saints. The Rams released him the next day and would sign him to the practice squad, which lasted a little over two weeks.

In early 2019, he was recruited to be the quarterback for the Birmingham Iron of the newly formed league, Alliance of American Football. He led them to a 5-3 mark, qualified for the playoffs, but then the league was dissolved and Pérez was unemployed.

Pérez signed contracts with the Philadelphia Eagles and Detroit Lions during the 2019 offseason, but they released him after one month and four days, respectively. This summer the Rams signed him for a second stint with the team, but released him after just a month. The player of Mexican parents seeks not only to stand out, but he seeks to spend more time in Seattle than where he has played the past four years.

Montez signed with the Seattle Sea Dragons of the XFL. After signing with the Washington Football Team — now the Washington Commanders — as an undrafted free agent following the 2020 NFL Draft, Montez has had mostly NFL practice squad experience with Washington and the Detroit Lions. The 25-year-old former University of Colorado quarterback played in two regular season games. He was released on May 11 of this year.

We’re ready for Steven Montez to bring the 🔥 to Seattle!

Latinos around the NFL in Week 10