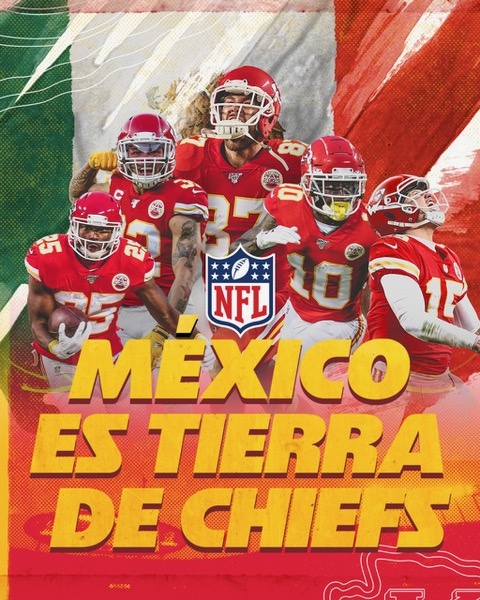 The NFL announced that the Chiefs received the rights to the IHMA – International Home Marketing Area – for Germany and Mexico as part of the global growth of professional football.

“We are delighted with the announcement; the club has secured international marketing rights for Germany and Mexico,” said Chiefs Chairman and CEO Clark Hunt. “Part of my father’s vision when he founded the AFL and the Dallas Texans franchise was to introduce professional soccer to fans in new parts of the country. He never lost his goal, to put the fans first. We see these global opportunities as an extension of his legacy — being able to grow in professional soccer both on and off the field, while introducing fans around the world to all that makes the Chiefs Kingdom so special. “

“Currently the franchise is enjoying its most successful period in its history, we have some of the best players and coaches, as well as the support of a talented and dedicated business operations staff; without a doubt we are in a unique position to be leaders in the global growth of the NFL, ”said Chiefs president Mark Donovan. “We have an internal committee that has been leading our international efforts for several years and the announcement not only recognizes the hard work that went into this process, but marks the beginning of an exciting challenge for our team and an opportunity for our fans for years to come. “

As of January 1, 2022, the club will begin to activate its communication and marketing plans in both countries, including social networks in local language to be close to fans (Chiefs.com and Chiefs Mobile app), starting advertising campaigns , signing local sponsorship agreements, extending national sponsors internationally and aligning with local agencies.

In the long term, the club will invest in increasing its fan base in both markets through on-site activations and fan events, supporting and increasing local participation in youth FLAG soccer, launching local product sales initiatives, establishing partnerships. with existing fan clubs, creating a local community and social initiatives, as well as exploring opportunities to play in the regular season in these countries as part of the new NFL International Series game rotation.

The Chiefs and the Hunt family have been involved in numerous international initiatives over the past three decades, investing in the growth of the game and its global fan base; helping to showcase the best of sport on the international stage. The club previously appeared in four American Bowl preseason contests: Berlin (1990), Tokyo (1994 and 1998) and Monterrey, Mexico (1996).

Over the past seven years, he has played in two International Series regular season games, hosting the Detroit Lions at London’s Wembley Stadium in 2015 and facing the Los Angeles Chargers at Mexico City’s Estadio Azteca in 2019. .

In addition to international contests, Chiefs President and CEO Clark Hunt serves on the NFL International Committee, having served as president from 2011 to 2018, advocating for the expansion of the league’s international efforts and presence of the NFL abroad. During the 2021 season, 31 teams have played a total of 30 regular season games in London, while the league has hosted three regular season games in Mexico since 2016. In addition, Chiefs Cheerleaders and KC Wolf have visited more than 60 military installations around the world to show their support for the men and women serving abroad and the club also has more than 15,000 young people already participating in the Chiefs soccer FLAG leagues in Mexico and France.