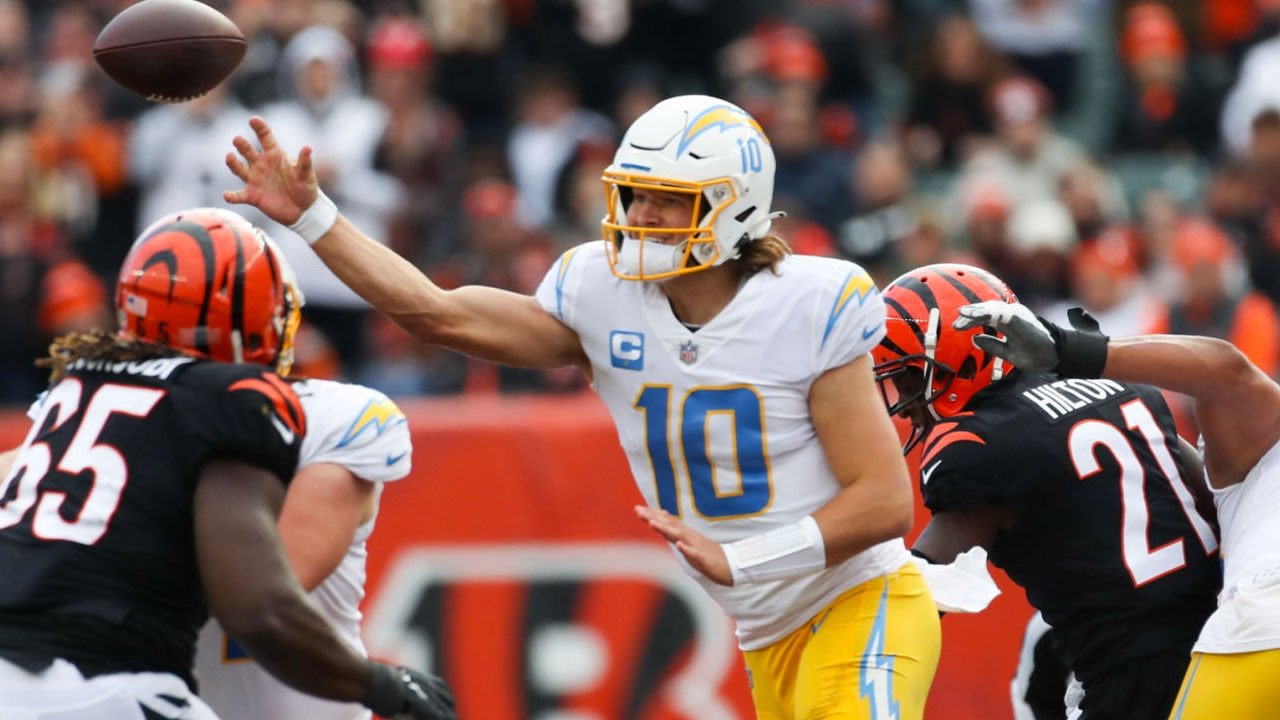 Week 13 of the 2021 NFL Season featured a game where the Chargers defeated the Bengals 41-22 at home to further close the picture towards the Playoffs within the AFC. Justin Herbert edged out in a duel between first-round quarterbacks of the Class of 2020, meanwhile, Cincinnati and Joe Burrow remain unproven that they are ready to be considered contenders in the American Conference. In this article we will tell you the panorama of both teams after this confrontation.

This afternoon we witnessed the first professional meeting between Justin Herbert and Joe Burrow, two first-round quarterbacks from the Class of 2020 who want to make their franchises immediate contenders within the American Conference. Yet this time at least, most of the game was one-sided, and the Chargers came out with a win that puts them more than ever into the postseason scene and to continue to fight for the AFC West division lead.

Herbert concluded this game with a final line of 26 completions for 317 yards, 3 TDs and 1 INT, looking solid for most of the game. Also, with his endorsements today, he joined Peyton Manning and Russell Wilson as the only quarterbacks in NFL history in registering 25+ TD shipments in his first two seasons within the league.

Justin herbert joins @ProFootballHOF Peyton Manning & Russell Wilson as the only players ever with 25+ TD passes in each of their 1st 2 seasons.

To achieve this, the Chargers offense once again rested on the hands of WR Mike Williams, who in 5 receptions accumulated a total of 110 yards, surpassing the 100+ barrier for the third time this season. But in addition, there was also an unexpected factor; This is WR Jalen Guyton, who contributed 90 yards and 1 TD on the field of play, by far his best performance so far this season.

Nor can it be ignored that WR Keenan Allen showed himself when he was needed the most, and although he had only 34 receiving yards, he recorded 2 touchdowns. For his part, RB Austin Ekeler finished the game with 104 yards from the scrimmage line and 1 TD. It really was a meeting where the entire Los Angeles offense was awake, and when you have so much talent distributed, it is to be expected that the opposing defense cannot contain them throughout the game; the 41 points scored by the Chargers confirm it.

However, on the other side of the ball they also did a great job, especially individual performances by the cornerbacks. Tevaughn Campbell recovered a fumble and carried it 64 yards for a score of 6 that turned the tide for the afternoon. For their part, both Michael Davis and Chris Harris Jr. recorded 1 INT each. In addition, LB Uchenna Nwosu contributed 2 sacks in a game where Burrow was never allowed to breathe easily.

The only concern on defense is that DE Joey Bosa missed the second half due to a head injury. At the end of the meeting, it was clarified that he exceeded the concussion protocols and that they decided not to return him to the game so as not to risk it. It should be appreciated that the Chargers have decided to be cautious as this would have been the third concussion suffered by Bosa in the past two years. However, everything indicates that they will have him healthy for the end of the season, where Los Angeles is still trying to seal their place to the Playoffs.

How much can you still believe in these Bengals?

The inconsistency of teams like Cincinnati is what makes the American Conference very close this year. Just when the Bengals were making a case for them as a threatening series in the AFC, comes this catastrophic loss to the Chargers that complicates everything. In addition, it was a game where they were exhibited; They looked bad for most of the meeting and make you believe that this project is not ready to take the next step.

QB Joe Burrow completed 24 passes for 300 yards, 1 TD, 2 INT, and another fumble on the ground. Additionally, the offensive line that protects him proved to be papery by allowing himself to be captured on 6 different occasions. The previous combinations are undoubtedly to worry about, and if that was not enough, not even RB Joe Mixon could save them because, although he contributed 52 yards on the ground and 1 touchdown, he had his worst game since October 31 against the Jets.

Who did look phenomenal in a season where he is on the rise was WR Tee Higgins, accumulating 1 TD and 138 yards on 9 receptions, while WR Tyler Boyd contributed another 85 in the field. A deadly duo of wide receivers who simply couldn’t avoid the downfall of their team even though they individually had a great afternoon. Although, of course, as the two mentioned continue to shine, rookie Ja’Marr Chase (5 rec, 52 yards) is the one who suffers the most in the statistics and his season continues to decline in production.

On the defensive today there is nothing to applaud those led by Zac Taylor. It is the second time in the last four games that they allow 41 points (Week 9 against the Browns) and clearly they will need an improvement via NFL Draft or Free Agency if they intend to rub shoulders with the powers of the American Conference in the immediate future.

Thus, at the end of this game, Los Angeles (7-5) and Cincinnati (7-5) have the same record within the American Conference, being sixth and seventh seeds respectively, occupying the last two current postseason tickets. In addition, the Chargers are located in the middle game of the Chiefs in the race for AFC West, so they even aspire to the divisional leadership, for their part, the Bengals must protect that precious seventh place at all costs.

Can the Bengals mend their way to a postseason berth? Are the Chargers destined to enter the Playoffs? We read you in the comments below this article and on our social networks.