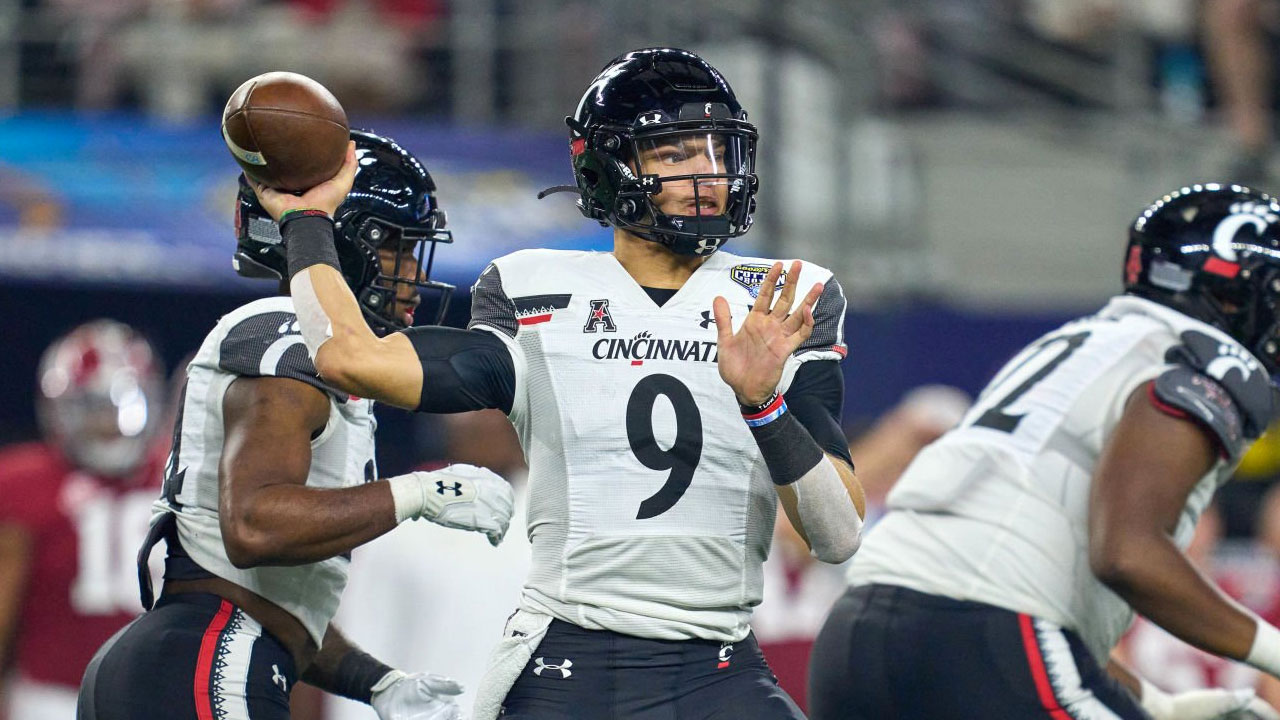 The content of the 2022 NFL Draft has already started in full on First and Ten and there is no other way to start than by talking about the most valuable position in the entire sport: the quarterback. In this article I present my reasons why Cincinnati QB Desmond Ridder is the best passer in the entire Draft and should be considered as such starting today.

Why is Desmond Ridder the best QB in the 2022 NFL Draft?

He’s the biggest brain in the whole class

In terms of processing plays and being quick to recognize the open player, Ridder is by far the best in this slim class of 2022. Not only is he good at doing this to throw quality passes down the pitch, but to recognize when to keep the ball and run down the field.

Having the athletic ability to outrun his defenders, Ridder chooses to win from the pocket by reading NFL concepts at incredibly good speed. This is one of the signs that he is the most prepared QB to play in the NFL – in the right system – where he could shine as much as Tannehill does on the Titans, a player with a great running upside, tremendous game recognition and ability to shoot the ball 20-plus yards in a big way, but still relying on the system to produce at a high level.

His statistics and projections are promising

In 2021, Ridder ended up taking the leap that will catapult him to possibly be the first QB taken in the Draft. This is a good sign, as in his four years with the Bearcats, Ridder showed improvement in every one of his areas of opportunity and ended up being one of the best QBs in the entire nation. He had a nice Big Time Throws percentage of 6.5% that was Top 25 in the nation.

His aggressive decision-making has been criticized, but the reality is that it wasn’t a big problem in his last year of college with only 2.1% of plays that could have ended in turnovers, and only two of those plays in his last seven games.

As I mentioned before, Ridder is not a QB who wins only through the air, he also wins on the ground, since in his career he had 12 TDs with Cincinnati and last season he averaged 5.6 yards per carry. In passes of more than 20 yards, he was the 10th most yards thrown showing that he has above average arm talent.

Desmond Ridder reminds me soooo much of Tannehill… pic.twitter.com/4SN6Uyg6BT

As far as projections go, one of my go-to figures (and in my view the brightest mind I’ve ever met in the entire NFL industry), Eric Eager, talk about them regarding Ridder in this article. Where he gets to will have a lot to do with a prospect like this one, who didn’t stand out in his first few seasons, but has improved drastically this year. If he can get a team to help him with play action, RPO and make life easy for him in his scheme, we can expect 68% completion and a QB who can start and look decent in any offense.

The doubts it raises

One of the things you’ll hear most against him is his passing accuracy. The reality is that this was not a problem for him in 2021 showing spectacular talent in putting the ball where he wanted. That question is possibly poorly worded, since the real question is whether he will be able to produce at the professional level as he did in his last season in college.

If we continue the positive trend that it has had in recent years, we could infer that this will be the case and I bet more that it will be in the big leagues.

My only question is, rather, how much better can a below-average or NFL-average situation improve? This issue could arise if it gets to the Panthers, who have a playcaller like Matt Rhule in the last places of ERA and creativity, so it could be a big challenge for Ridder, similar to the one experienced by rookies like Zach Wilson or Trevor Lawrence.

The next destination that might seem likely to me and that models the second unknown well is the Commanders, an average NFL team with a playcaller in the league average. If he can go after these teams, Ridder would be in his desired situation, with an above-average team that could catalyze his growth and optimize his skills, making a QB-like season like Ryan Tannehill or Jimmy Garoppolo likely with a Significantly cheaper contract in a season with a shortage at the position.

Security in a storm, making the analogy with this Draft where all the QBs are great unknowns and players to develop, sitting out a year and wasting a year of a rookie contract, is more valuable than ever because of how expensive the rookie contracts are. the QBs. In Desmond Ridder’s case, you can throw him to the wolves and expect good, but not amazing, things from him. In a year with no outstanding QBs, he has to be number one in all the QB rankings.

Is Desmond Ridder the best QB in the 2022 NFL Draft?