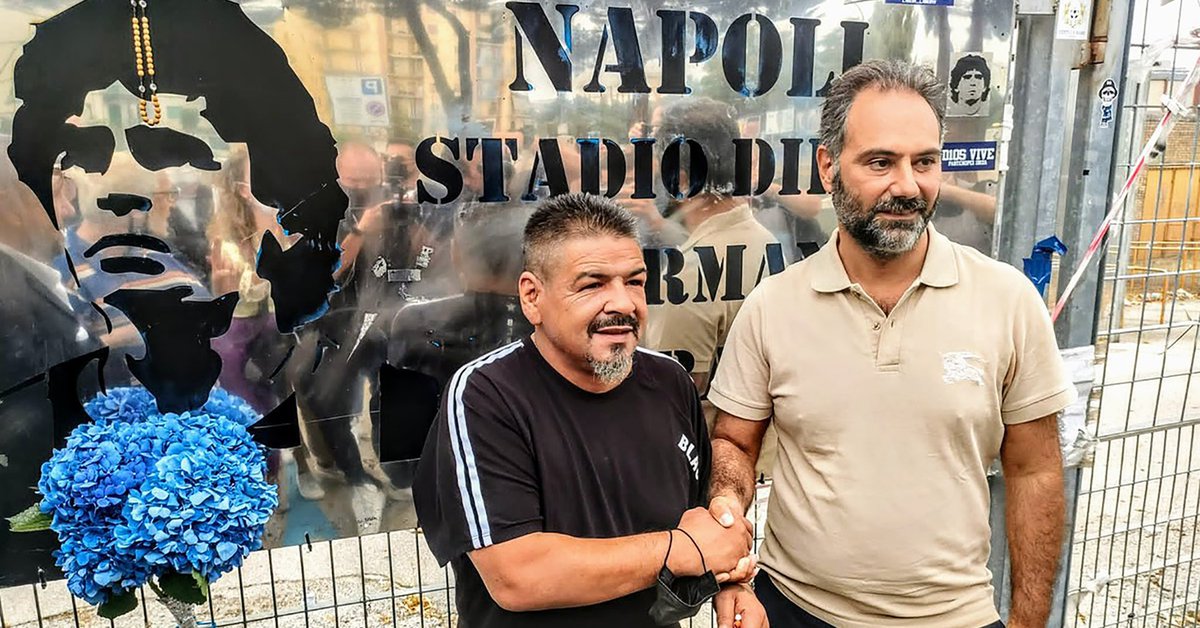 Hugo Hernan Maradona, one of the brothers of the remembered Diego Armando Maradona, who died on November 25, 2020, announced today his intention to stand in the municipal elections of the Italian city of Naples next October, according to the Italian media Sky TG24. He will join an alliance and anticipated his support for mayoral candidate Catello Maresca.

The “Turk” Maradona will join the list of the political group called “Napoles Capital”, by Enzo Rivellini, which is part of the center-right coalition led by Maresca, the candidate for mayor of the southern Italian city.

“My greatest commitment is with children and youth,” he said in an impromptu press conference today in the vicinity of the Diego Armando Maradona Stadium, the place where his brother filled the local club with football and led him to win two Scudetto in the 1986/1987 and 1989/1990 seasons, as well as a UEFA Cup (now Europa League) in 1988/1989, a Copa of Italy (1987) and the Italian Super Cup in 1990.

“I have been committed to supporting children and youth for a long time, and I would like to continue in this direction. Above all I would like to try to guarantee access to sport”Explained the 52-year-old ex-footballer.

The Maradona’s younger brother added that “they have proposed this to me to help the children and I do it with great happiness. I am not talking about politics, only about soccer and giving children one, two or three hours a week to be happy with soccer ”.

On the other hand, the Turkish had a brief disagreement with a journalist who asked him if he was not taking advantage of his brother’s fame, a question much talked about in the city in recent days. “I’m Hugo Maradona, not Diego, okay?“, answered.

Hugo does not have Italian nationality, although he resides in that country on a regular basis after having married years ago and requested it, “so the government delegation will be informed of this so that he can attend,” Rivellini assured.

In addition, Rivellini explained that Maradona’s brother “realized the social unrest of young Neapolitans and that is why he wants to help from the municipal level.”

“When we talked about his candidacy, he did not ask me for anything, only to continue helping the youth of Naples from within the institutions,” declared the founder of “Naples Capital”. Based on that explanation, if this list wins, we will have to see what position Hugo would have.

The coalition that promotes the nomination of the Turkish also showed a poster that has the faces of Diego and Hugo Maradona and their slogan is “Only Naples, the capital, has a Maradona to make the city great again”.

Rivellini also criticized those who argue about the use of the Maradona surname: “He will run for elections, if the people of Naples want him, they will vote for him in full democracy,” he declared.

While the mayoral candidate, Maresca, thanked the former Argentine footballer for his availability. “Whoever wants to make himself available to the city is well accepted,” he argued.

The intimacy of the Messi family’s vacation: the video of Leo’s jump with Thiago from a yacht and the visit to a “magical” island
Diving from a yacht and a look that made it a trend: the new photos of Lionel Messi’s holidays in Ibiza