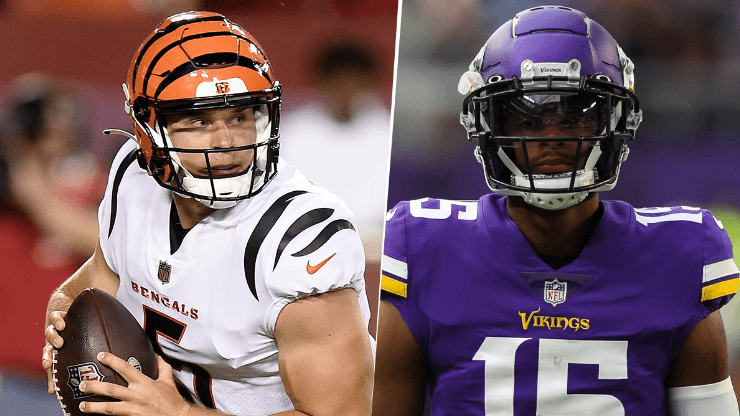 Cincinnati Bengals will face Minnesota Vikings in a match corresponding to Week 1 of the NFL 2021. Find out all the details of the match: Forecast, date, time and TV channel to watch LIVE ONLINE.

The National Football League is back! Cincinnati Bengals will face Minnesota Vikings this Sunday, September 12 at Paul Brown Stadium to play a match corresponding to the Week 1 of the NFL 2021. Find out all the details of this great game: Forecast, date, time, streaming and TV channel to watch LIVE ONLINE.

Cincinnati Bengals finish the NFL preseason with a record of 1-2. In the first match they defeated Tampa Bay Buccaneers by 19 to 14, in the second they fell to Washington Football Team by 17 to 13 and in the third they lost to Miami dolphins by 29 to 26.

On the other hand, Minnesota Vikings finished the NFL preseason with a record of 0-3. In the first game they fell to Denver Broncos by 33 to 6, in the second they lost to Indianapolis Coltsby 12 to 10 and in the third they were surpassed by Kansas city chiefs by 28 to 25.

Cincinnati Bengals in Week 2 it will be measured against Chicago Bears next Sunday, September 19, while Jacksonville Jaguars will collide in front of Arizona cardinals The same day.

Cincinnati Bengals vs. Minnesota Vikings: When and what time to watch Week 1 of the 2021 NFL live?

Cincinnati Bengals vs. Minnesota Vikings: Which channel broadcasts Week 1 of the 2021 NFL?

This 2021 NFL Week 1 encounter between the Cincinnati Bengals and Minnesota Vikings will be broadcast in the United States through FOX. On the other hand, In Latin America it can be seen through the different ESPN signals, which will broadcast NFL Redzone.

Cincinnati Bengals vs. Minnesota Vikings: What are the forecasts?

For this match of Week 1 of the NFL 2021, the United States bookmakers (FanDuel) give Minnesota Vikings as the favorite to stay with the victory, since it has a odds of -164. On the other hand, the victory of the Cincinnati Bengals has a odds of +138.