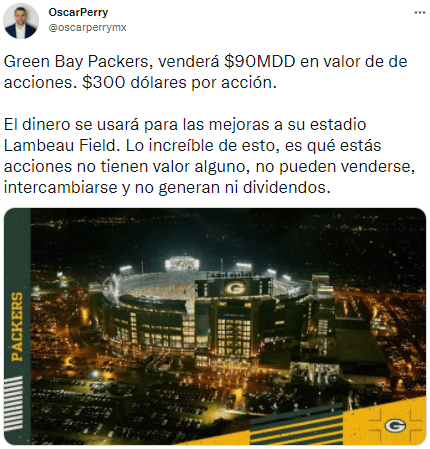 The NFL announced that one of its most important franchises such as Green Bay Packers will sell its shares. The move was intended to raise enough money for building improvements at Lambeau Field. Total, the club announced that it expects to sell 90 million dollars. In that sense, the fans are excited about being able to “own” a part.

As stipulated a week ago, the value of each share will cost $ 300. They do not represent any value, they cannot be sold or exchanged. Much less generate dividends. In this sense, the US portals remarked that the only benefit is to help the large franchise owners to improve the institution’s facilities.

According to official data, this stadium was inaugurated in 1957 and for seven seasons it had the name of City Stadium. Previously it already had a couple of modifications in 2005 and 2013, where it managed to add more seats in the stadium. Currently, it has space to host 81,441 spectators to enjoy American football games.

Around the stadium it has some of the best brands of some players of the style of Don Hutson, Tony Canadeo and Bart Starr. In addition, some retired jerseys and local titles such as NFL for the Green Bay Packers franchise are on display. Some of them can no longer be used, as the custom in sports in the United States emphasizes.

How do the Packers this season?

So far they are the leaders of the NFC North of the National Conference with a record of eight wins and just three falls. In his last game, he suffered a painful 34-31 loss to the Minnesota Vikings. Despite a great recovery from the second period, the 9-3 in the first quarter cost dearly. This week he will play against the Los Angeles Rams in one of the most promising games on Sunday.

Green Bay Packers, the NFL club where fans can “own” – The Intranews