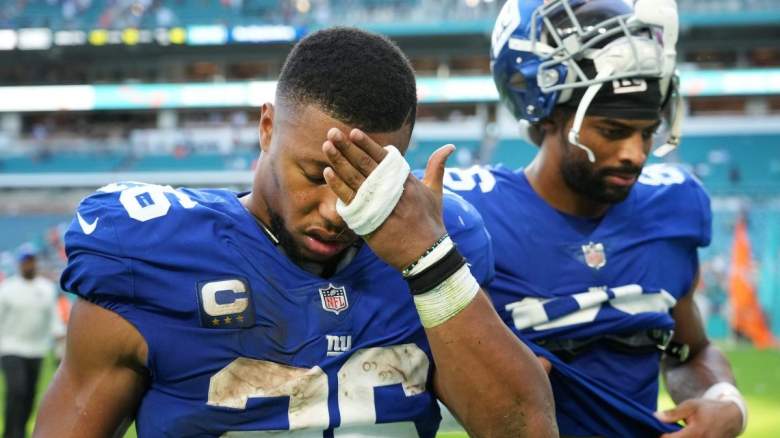 The New York Giants continue to do their due diligence as they prepare for the possibility of life without Saquon Barkley. With nine picks in the upcoming 2022 NFL draft, the club has been looking for running backs, presumably to step into the starting role as rumors circulate of Barkley’s possible departure.

While reports indicate they have made their admiration for Georgia running back James Cook known, the team is also looking at FCS options. Draft Network’s Justin Melo reports that the team has scheduled a private workout with South Dakota State standout senior Pierre Strong Jr. later this month.

The dual-threat running back had a stellar NFL combination, impressing with his vertical and long jumps while running the fastest 40-yard dash in this year’s event, clocking in at 4.37 seconds.

Strong Jr., 23, had an impressive career with the Jackrabbits, winning the Mountain Valley Football Conference (MVFC) Freshman of the Year award in 2018, as well as being named to the All-MVFC team three times and win FCS All-American. honors in 2021. His performance at the aforementioned combine has drawn a lot of interest and the Giants appear to be at the top of that list, having scheduled a private workout with the prospect.

The Giants are also looking for a quarterback prospect.

It seems the Giants aren’t just preparing for life without Barkley. While starting quarterback Daniel Jones appears to be next season’s starter, the club has shown a lot of interest in North Carolina quarterback Sam Howell.

The 21-year-old Tar Heel was named the ACC Rookie of the Year in 2019, and he also earned All-ACC Second Team honors in 2020. However, if the Giants are interested in drafting him, it appears he would be face stiff competition. . Howell has already met with the Steelers and has scheduled visits with the Panthers, Colts and Falcons. With Jones and newly signed free agent Tyrod Taylor set to be one and two on the depth chart respectively, Howell would be the No. 3 quarterback this season.

However, rumors have already circulated that Jones might not be insurance to remain the team’s starter beyond this season. The Giants may well be planning to draft his successor this year, instead of waiting until 2023.

Former Giants running back dies at 52

Gary Brown, who played for the Giants for the last two seasons of his eight-year career, passed away on Sunday, April 10 after battling cancer.

Following his retirement in 1999, Brown had a long coaching career. He enjoyed multiple stints as running backs coach, both in college with teams like Rutgers and Wisconsin, and in the NFL with the Cowboys and Browns.

In his 1998 season with the Giants, he rushed for a career-best 1,063 yards, playing 16 complete games and 11 starts. Brown was in hospice care and had been suffering from “significant” health issues since 2019. His final season as coach came in 2021 with the Wisconsin Badgers.

Giants in search of All-American RB ahead of NFL draft: Report – Home