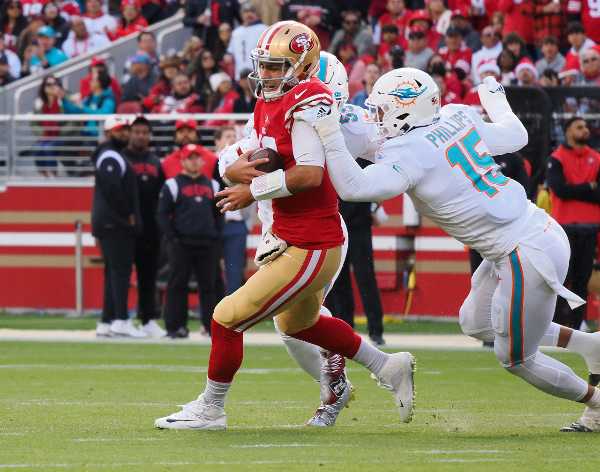 Jimmy Garoppolo, quarterback of the San Francisco 49ers, suffered this Sunday the fractured left ankle which will require surgery and sideline him for the remainder of the 2022 NFL season.

“It was crushing. I received the news in the second quarter. Jimmy will be out because he will need surgery, broke her ankle“, San Francisco coach Kyle Shanahan explained at a press conference.

Garoppolo was injured during the game in which the 49ers beat the Miami Dolphins 33-17 in week 13 of the 2022 NFL season.

The quarterback was injured in the first quarter, it happened on a play in which he was sacked by Jerome Baker and Jaelan Phillips; During the action, his foot got stuck in the grass, which caused his fracture.

The 31-year-old tried to get up, but pain prevented him; he was taken to the locker room and from there he went to the hospital where they carried out more studies.

Garoppolo’s place was taken by Brock Purdy, a 22-year-old boy called “Mr. Irrelevant”, a name that in the NFL is applied to the last selected in the Draft each year, something that happened with Purdy in 2022.

The rookie did an outstanding job, passing for 210 yards, two scores and an interception in his team’s win.

It is the second time this season that the Gambusinos have lost one of their quarterbacks to an ankle injury.

Garoppolo, who led the 49ers to the 2021 NFC Finals, was meant to be the backup this season because Shanahan picked Trey Lance, 22-year-old rookie, to be the number one quarterback.

Jimmy returned to the starting job with Lance’s broken ankle suffered in week two of the game in which San Francisco beat the Seattle Seahawks.

Despite the injuries to Lance and Garoppolo, the 49ers are in first place in the West division of the National Conference with eight wins and four losses.EFE