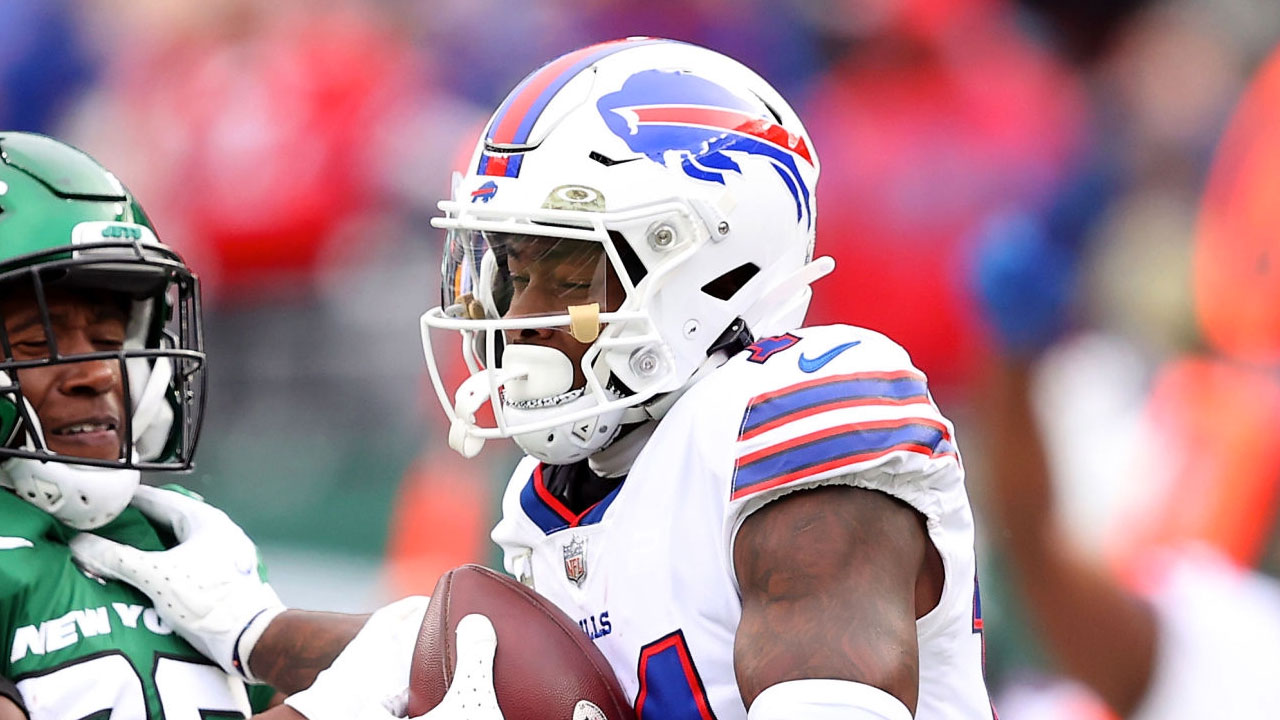 We continue with a real madness within the AFC, and the only thing for sure is that nothing is certain. We talked about this and other things From the Shotgun Formation.

In something that is becoming a trend in the 2021 NFL Season, any team can surprise. This time around, the Colts easily beat the Bills, the Texans beat the Titans and the teams that were supposed to be the “down” teams (New England and Kansas City) are on the mend and seem headed for the postseason.

That leads us to an existential question: are we facing a case of parity or do we just have a mediocre conference? Because the NFL is based on the principle of “any team can beat anyone”, but what we are seeing this season is already starting to look strange.

Let’s take the example of the Titans. In their five-game winning streak they defeated the Jaguars, Bills, Chiefs, Colts and Rams, which is quite interesting because we are talking about four teams with real postseason aspirations and at least three contenders. But that streak began after losing to the Jets, and ended with a loss to Houston. So it’s easier for the Titans to beat Bills and Rams than it is to beat the Jets and Texans.

And so we can go with everyone else in the AFC. In the National Conference it can be argued that, although there are also surprises, there are at least five teams that look the strongest this year: Cowboys, Packers, Buccaneers, Rams and Cardinals. In the AFC? You can give me five names from the following list and they will sound possible to me: Bills, Patriots, Ravens, Browns, Bengals, Steelers, Titans, Colts and Chiefs… come on, not long ago Chargers and Raiders would have been part of that list.

Personally, I think we are entering quite complex territory in the AFC: when all teams have the same possibility of going to the postseason, it is possible to think that more than parity what we have is a group of teams that are flirting with mediocrity.

1. Jonathan Taylor should be on the list. It’s a fact that season MVP is an award for quarterbacks, but the Colts running back deserves to be in the conversation this year. Yes, even if he has no real chance of winning, but it is necessary to talk about the good work he is doing on the Indianapolis offense. His five-touchdown effort propelled the Colts over the Bills and keeps this team in contention for the postseason. It seems a fact that without him they would not have succeeded.

2. Are you back? Ron Rivera’s teams in Carolina were characterized by miraculous recoveries in the second half of the season, and it seems that the same effect is yet to come in Washington. After starting 2-6 two wins have come after the bye week, and now the Washington Football Team is in contention for a wild card spot. Yes, they are far away, but at least they look much closer than they were at the end of October.

3. Still missing. When the Seahawks lost Russell Wilson, the watchword was clear: you had to keep the team afloat as Wilson returned, because with him on the field everything would be different. The problem is, things haven’t changed and the Seahawks are 3-7 with mere “mathematical chances” of going to the postseason. It seems that the rest of the 2021 NFL Season will be used to assess the situation of this team, because changes are needed if they want to be relevant again.

After what happened in week 11 of the 2021 NFL Season, here are some things I think I know:

1. Incredible, but true. The Packers and Cowboys losses are great news for the Rams, who appear to have had their most positive week in the past month. The interesting thing is that they did not play. We’ll see if this can help Sean McVay’s team get back on track.

2. Worth mentioning. When Nick Siriani decided to give the ball to his running backs more continuously, things started to look up in Philadelphia. It seems that this is the decision that is turning the season around the Eagles, who already have four games exceeding 200 rushing yards.

3. Help. If anyone is clear about how the Power Ranking teams should be accommodated, I would appreciate a message. With so many surprises every week, it is becoming almost impossible to generate a more or less convincing Top 10. Of course, rest assured that it will come out.

To get back on track. The Buccaneers are coming off losing to Washington and that added them to the long list of surprising results in the 2021 NFL Season. If Tampa Bay wants to prove that that game was an exception then they need to beat a few Giants who are still struggling to find rhythm without much trouble. in the campaign. A Giants victory would not only be a surprise, it would be enough to set off the alarm lights in Tampa Bay. Of course, I see it unlikely that will happen.

If logic prevails (something that hasn’t happened lately in the NFL) the Buccaneers should win, and it should be a quiet game. I’m going with the Bucs by a score of 24-10, although it is quite likely that it will end up being something else entirely.

We already talked about how in Washington vs. Carolina there were several comebacks: Ron Rivera, Taylor Heinicke and Joey Slye from Washington returned to Carolina, plus Cam Newton had his first game back with the Panthers. So I chose this song to remember this:

Every week there are many things to talk about college football, so we open a space to do that. Let’s see what was the most striking thing about this day in the NCAA:

1. Follow the dominance of the Buckeyes. Ohio State and Michigan State entered Saturday as teams ranked in the Top 10 (OSU was 5, MSU was 7), but the only ones who saw themselves as such on the field were the Buckeyes, who gave one of the most dominant performances of the game. year, as they won 56-7. In fact this game was decided in two quarters, as they went 49-0 at halftime with six TD passes from CJ Stroud. The Spartans were limited to 224 total yards on offense and only 66 on the ground. This is Ohio State’s sixth straight win over Michigan State and three of those wins have been by more than 40 points.

2. The Ducks’ hopes are dashed. Oregon came in as the nation’s No. 4 team in their game against Utah and took a 38-7 beating that basically puts them out of contention for the College Football Playoff. Although they have had a season full of returns, this time it was not possible, as after going down 21-0 with two missed field goals they returned a 78-yard punt for a score. There was no way for Oregon to get up from that, and now we just have to wait to see how things turn out with the other contenders.

3. Stay firm. This seems to be Georgia’s year, and they took advantage of their Senior Day rival to give their bench some action. Charleston Southern was the rival on duty and they were never in the game, as the Bulldogs scored four times in the first quarter and already led by seven touchdowns at halftime. At the moment there are no arguments to take the top spot from them in the rankings, so they seem headed for the CFP.

This week ONEFA continued with this season back to activities, and there are some things to mention about this day:

1. Authentic Tigres wore. The Monterrey team had a very interesting performance against the Borregos Toluca, and although there was a moment where the scoreboard indicated 14-7 little by little the Authentic (2-0) took control of the game and ended up beating a team of Toluca (1-1) that puts things in perspective.

2. Borregos Monterrey looks very good. The Borregios had irregular years in CONADEIP, but it seems that their return to ONEFA has served to reconnect as that dominant team that they were not long ago. This week they beat the UVM Bobcats 43-14 and they look like one of the strongest teams this year.

3. Great Chime of Owls. The IPN team gave one of the great surprises of this year by defeating the Lions of Anahuac Cancún 23-20, the best team in the National Conference in recent years. The highlight of this performance was the work of the Búhos defense, which left the Lions at -4 yards rushing, making the work of the rest of the team much easier.

4. Here they keep winning. After a difficult start to the season against Monterrey, the Pumas Acatlán have improved remarkably and now added another very important victory by defeating the Aguilas Blancas of the IPN 22-13. Coach Horacio García’s work is paying off quickly in Acatlán.

Mac Jones’ career start has been very good, especially in away games:

Mac Jones is now 5-0 this season on the road. He joins Dak Prescott and Ben Roethlisberger as the only rookies in NFL history to win each of their first 5 career road starts.@Patriots | #ThursdayNightFootball

The “OBJ reception” video of the week

Mauricio Santos is a receiver for the Monterrey Borregos and had one of the best receptions of the season. In fact, he recalled what a certain NFL receiver did in his prime:

OBJ are you? What kind of reception from Mauricio Santos 😱😱😱

To frame, to applaud and to enjoy 💙 #WeAreBorregosMTY

What’s more, from now on we can say that Mauricio Santos is Mexico’s best receiver, based solely on that action.

We all like field goal tricks, right? Well, here’s a really good one:

Here we end this installment of this column. You already know that you can leave me here below this article in the comments or on my Twitter account your suggestions for topics to be covered From the Shotgun Formation. You can also share videos that you think should appear in one of the weekly sections.

From the Shotgun Formation: The AFC, from parity to mediocrity – Week 12 NFL Season 2021