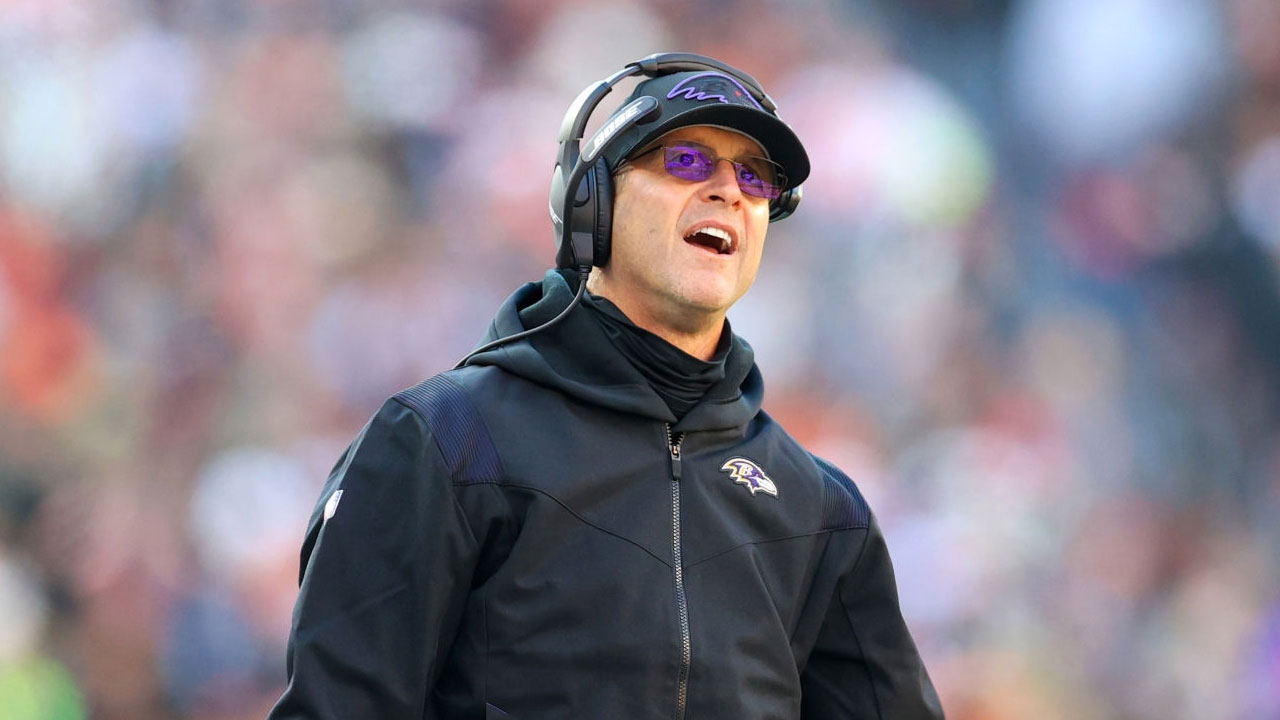 Brandon Staley and John Harbaugh used a good dose of analytics in week 15… and so it went. A little reminder not to over-analyze things in the NFL. We talked about this and other things From the Shotgun Formation.

A few weeks ago I commented in this space on Ron Rivera’s decision not to kick an extra point for a question of analytics. This week there were a couple of games where this topic became very relevant, and yes, for negative reasons.

Last Thursday Brandon Staley dedicated himself to playing his fourth chances and the bet ended up costing him the game against the Chiefs. These decisions can be defended in large part because they were made at points in the game where there was the possibility of recovering what was lost. The Chargers couldn’t do it, but the possibility was there and that was enough to justify the decisions.

And then there is the case of John Harbaugh.

The Ravens coach has decided, from what I can see right now, that he has no intention of playing overtime. After unsuccessfully attempting a late-game two-point conversion against the Steelers, he now did the same again. With the game 31-24 in favor of Green Bay, their offense reached the score and it was by the conversion of two, which they failed again. The scoreboard was 31-30 with 42 seconds left.

This decision has many more points against it than anything Staley did on Thursday. First of all, what are you afraid of in overtime? He has the best kicker in the NFL in Justin Tucker, and his team was with the moment of the game after coming back from a 14-point deficit. Now, are you telling me that trying a two conversion wasn’t such a bad idea because there was a chance to get the short kick back and score a field goal in 42 seconds? Because if that’s it, then I don’t want to know anything about analytics in the future.

In a nutshell, I understand the idea behind advanced analytics, and I understand that in many cases decisions are made based on trends and that the current NFL does not value a field goal as much and that from the perspective of the numbers it is more likely Winning a game at the same moment than waiting for a toss in overtime.

But here’s another analysis: Before the two-point conversion against the Packers, the Ravens had made two of their seven two-point attempts. Using simple math, they would most likely fail the conversion. That should have been part of the evaluation, right? I hope, next time, someone will tell you that their team is 2 out of 8 in conversions of two.

1. They are ready. We’ve already talked a lot about the Colts in recent weeks, but it needs to be mentioned again: This team is armed for the postseason. With a consistent defense and a solid running game, it looks like Indianapolis is getting into the swing of things at the best of times and they could be one of the big upsets of the postseason. At least I have the impression that in a year where there are no clear favorites in the AFC, it is highly likely that the Colts’ style of play will eventually prevail in the playoffs.

2. Pleasant impression. With three weeks to go, I have to say that I love what the Bengals have done this year. It is a team that has advanced a lot against what it has done in past seasons and it shows that they are in the process of learning. They’re not yet in a position to think of a Super Bowl, but at the very least they see themselves as a serious postseason contender. This week’s game against Denver made that clear, and it looks like Zac Taylor has done enough to buy himself at least a couple more seasons at the helm of this franchise.

3. In the opposite direction. This year the expectation was that the Dallas Cowboys were going to be a very powerful team on offense with some problems on defense. The recent reality is that this team is being a defensive powerhouse with many issues to resolve on the attack. On the overall balance, this team is where the fans expected (first place in NFC East and headed for the postseason), but there is a feeling that things are not at the best of times. At least there is no confidence that this year things will be different.

After what happened in Week 15 of the 2021 NFL Season, here are some things I think I know:

1. It’s still a bad idea. The week before the Raiders decided to have a meeting about the Chiefs logo and I commented that it was a bad idea. This week the Titans decided to have the same meeting (they over the Steelers logo) and the result was the same (although less scandalous). I don’t know if it’s a coincidence karma or something like that, but it is clear that it is a bad idea to do that. Come on, at least they should consider that it does not make much sense to generate a little more encouragement in the rival.

2. The one that follows. It is not uncommon for a substitute QB to have a couple of good games and raise the question “can he start elsewhere?” Baltimore’s Tyler Huntley is next on that list after a couple of good appearances, including a good game against the Packers. It is normal for various teams to see him and think how likely it is that he can function as a starter with them. You’ll see.

3. They are worth little. The Saints defeated the Buccaneers again, and now it’s four straight regular-season wins against Tom Brady’s Bucs. The problem is, I’m sure New Orleans would trade the four wins for winning the other game between them: the postseason game. Because at the end of the day a regular season win doesn’t compare to a playoff win, so Tom Brady has that going for him.

Or in the missing matches. This section is usually written with one game to play, but now there are four left, thanks to postponements due to COVID-19 issues. This Monday the Raiders are playing against Browns and the “official” MNF, which is Vikings vs Bears. Both games have postseason implications because three of the four teams are in contention for a ticket (they say the Bears are too, but we know it’s not that real). On Tuesday they will play Rams vs. Seahawks and Washington vs. Eagles in another pair of games with postseason implications.

All games have problems with COVID, so the most sensible thing is to wait and see how each team arrives at the game. What it is is that beyond reason, it is appreciated to have more football on television.

This week marked the end of the Urban Meyer era in Jacksonville, marking the end of much of the “Stories to Tell… WEY” that Luis Obregón and a server do. That is why the song is dedicated to him.

As they say: “Don’t cry because it’s over. Smile because it happened ”.

We get to the point of the year where everything is bowls, so let’s make a few notes:

1. Keep the hot streak going. At the LendingTree Bowl, Eastern Michigan struggled to contain Malik Willis and Liberty ‘running offense, which finished the game with 233 rushing yards. In the end, the offensive might of the Flames was a lot for the Eagles’ defense, and this continues the drought of bowls in Eastern Michigan, which has not won one since 1987. Liberty, meanwhile, adds its third consecutive victory in bowls, being the second team in FBS history to win their first 3 bowls.

2. The first came. Coastal Carolina had 10 victories in the regular season and were seeking, in addition to the 11 win, their first bowl victory. Going into the fourth quarter of the Cure Bowl it looked like that would be for another year, but the Chanticleers made a comeback and went from trailing 41-33 to finishing with a 41-47 lead. Mind you, there was its fair share of controversy, as officials had some trouble managing the clock on the last play and denied the Northern Illinois Huskies a chance, who stayed at their rivals’ 4-yard line.

3. The bowls follow. This week we will have more bowls, and this is the list of matches for the next few days:

This week ONEFA ended this season back to activities, and there are some things to mention about this day:

1. Monterrey, champion. The red group of the 14 majors was taken by the Sheep from ITESM Monterrey, who finished the season undefeated and who, coincidentally, had a bye week this weekend. In other results this week in this group, the Borregos Puebla defeated Linces UVM 23-10, Aguilas Blancas defeated Borregos CEM by a score of 23-16 and Pumas Acatlán defeated the Leones de la Anáhuac México by a score of 20-10. .

2. Authentic Tigers, champion. In the green group of the 14 majors, the winners were the Authentic Tigres, who beat Burros Blancos 21-19 on the last day and closed the season undefeated. Pumas UNAM defeated Potros Salvajes UAEM 21-3 and with that the activities of the group were sealed, where this week the Borregos Toluca and Borregos Guadalajara did not see action.

– Brady was 29 years, 129 days old
– No currently active defensive player had yet entered the NFL
– Drew Brees was playing his first season w / the Saints

Double fumble video of the week

Although it was officially a single fumble, the sequence is most strange:

Two fumbles on one play! Chaos in Denver.

The celebration video of the week

They say a picture is worth a thousand words.

Here we end this installment of this column. You already know that you can leave me here below this article in the comments or on my twitter account your suggestions for topics to be covered From the Shotgun Formation. You can also share videos with me that you think should appear in one of the weekly sections.