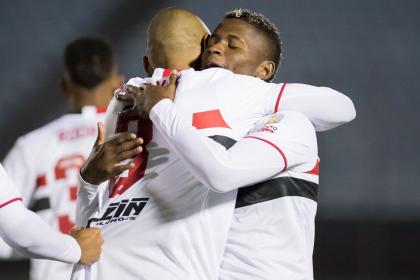 Sao Paulo, led by Argentine Hernán Crespo, added its third victory in fifteen rounds of the Brazilian Championship this Saturday by defeating Athletico Paranaense 1-2, thanks to striker Pablo Teixeira’s double for his former team.

Regarding the Colombians, the great news is that Luis Manuel Orejuela added his second match of 15 for Brasileirao, his most recent participation was on June 24. He entered at minute 85 in place of Igor Vinícius.

The three points allow the Tricolor de Morumbí provisionally to abandon the relegation places of the classification, waiting for what Cuiabá does, which will host Bahía.

The São Paulo team played better than their rival at the Arena da Baixada in Curitiba and left the game seen for sentence in the first half, boosted by Pablo’s effectiveness and the safety under the sticks of their goalkeeper, Tiago Volpi.

Pablo, who gained notoriety in Brazil precisely in the ranks of Paranaense, scored his first goal in the 13th minute by transforming a penalty that he himself caused, when he was knocked down in the area by Pedro Henrique.

The blow forced the local team to react, which equalized the score in the 27th minute through attacker Renato Kayzer. However, six minutes later, Pablo reapplied the “ex’s law” after taking advantage of a faulty shot by Gabriel Sara that passed between the legs of Thiago Heleno.

Again, the Paranaense went on the attack. Terans put Volpi to the test twice, but the Brazilian goalkeeper was splendid.

In the second half, the Curitiba Hurricane was more aggressive, although Sao Paulo, who missed several opportunities to take the final thrust, knew how to stay calm until the final minutes, when the game turned into a cross of kicks.

In these, Argentine midfielder Martín Benítez was sent off while warming up on the wing for hitting the ball when a Paranaense player was about to launch a corner kick.