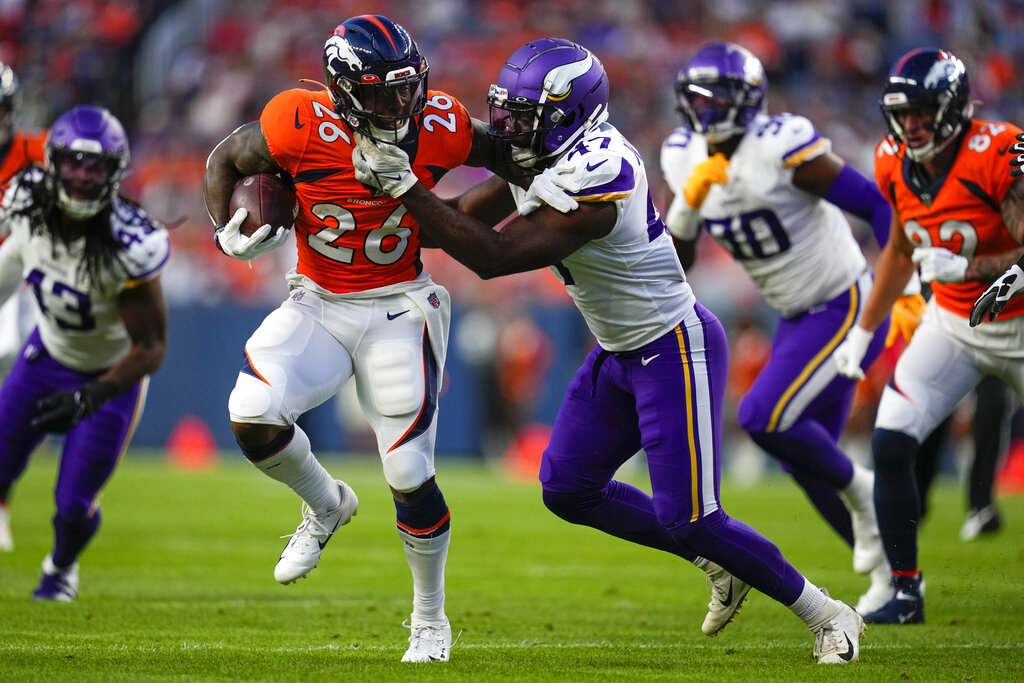 ANDThis week was the NBA media days and a phrase from Kyrie Irving: “The healthiest team wins every year”.

What does it have to do with the NFL Fantasy? That many times injuries are the difference. Last week we already saw several, some that were not even low over the weekend, but for week 5 we already have quite important pairs in Cordarrelle Patterson and Javonte Williams

You have to cover gaps, take advantage of opportunities or get ahead of the line and make advance purchases, because from week 6 the rest weeks come, which complicate this a bit more.

We present the best options in the waiver wirewith at least 50% availability in the Fantasy of NFL.com

Tyler Allgeier (Falcons, 0.9%): 104 total yards because of Cordarrelle’s knee injury, which last year was whittled down by injuries in the second half. Now the absence comes early by putting him on IR, so we won’t see him until at least Week 9. Allgeier takes over for a surprise running game. It would not be strange if it gives more results in the medium term than some of those mentioned last week.

Rhamondre Stevenson (Patriots, 61.1%): Why is the Pats’ starting running back available in 2 out of 5 leagues? He participates more than Damien Harris and has 20.1 and 12.9 points in the last two weeks. He has a matchup against Detroit, which gave up 48 points to Seattle.

Brian Robinson (Commanders, 42.8%): eligible to leave IR this week. He was going to be the starting running back before he was shot in the leg. He looks like recovery is on the right track. It may not be an option for this week, but if you can be patient and there are openings on the bench, it would be worth taking a RB who aims to be the main one, although Gibson and McKissic will also have some role.

Mike Boone (Broncos, 0.1%): three factors to consider: (1) the injury of Javonte Williams, who was immediately ruled OUT after the injury starting the second half, (2) Melvin Gordon is on 80% of the rosters and brings a serious case of butterfingers with four fumbles so far and two lost, which led to (3) Boone playing 19 snaps to MGIII’s 10.

Deon Jackson (Colts, 0.0%). Jonathan Taylor has time against him to play on Thursday. Nyheim Hines is the backup running back, but he’s more for obvious passing situations: Hines, in his 69 career games, has carried more than 10 times in only five. Other legs are needed and the only other running back on the roster is Jackson, a sophomore from Duke. There’s no production to get your hopes up: 31 yards on 13 carries, just 4.3 yards per carry in the NCAA, though he caught 61 passes, and last preseason he walked away with 1.27 yards per carry. If you want to see the glass half full: Raiders and Josh Jacobs gave Denver 212 yards and their line came very similar on the ground as the Colts.

George Pickens (Steelers, 33.6%): He had just 31 yards in the first half, but the QB switch came along and he showed preseason chemistry with Kenny Pickett, en route to 102 yards on six receptions. This offense could open up and the matchup in Buffalo, with the potential to go at a disadvantage, opens the door for an immediate Flex.

Romeo Doubs (Packers, 33.9%): lost a ball, but scored for the second week in a row. In social networks, the back shoulder pass was mentioned, emulating what Rodgers did with Davante. Clearly he and Lazard are the starting duo in Green Bay and while Lazard went 6-116, it’s his first 100-yard game since Week 3 of 2020. He’s usually more of a PPR player, with an option to get to 15 points if he scores. , but less than 10 if not.

Josh Reynolds (Lions, 4.1%): Amon-Ra St. Brown and D’Andre Swift did not play. DJ Chark and Kalif Raymond were injured, so Reynolds finished with 21.1 points. We will have to keep an eye on the injury report. At the moment, with Reynolds, it’s been three weeks of at least 12 points. He has the chemistry with Goff from the Rams days. The game in Foxboro against the Patriots is not the most promising because Goff is not good outdoors, but he is one of the few hands they have left.

Michael Gallup (Cowboys, 30.6%): similar case to Brian Robinson, of a player who comes from a long absence. Gallup debuted last week, ranking third in snaps among Dallas receivers (64%, CeeDee had 5% and Noah Brown 79%). He saw just three passes his way and caught two, saving his day with a TD. Three factors to consider: Brown has had a lot of chemistry with Cooper Rush, Gallup is going to increase his involvement after the crusader breaks, and Dak Prescott will eventually return. Gallup, in 9 games in 2021, I averaged 10.5 points and that had Amari Cooper on the team. An interesting option to take and see later, if you have spaces in the bank.

Geno Smith (Seahawks, 7.8%): sound outrageous… but he is the QB9 so far, three games he has given at least 17 points and the one that hasn’t, was in the rain and at a disadvantage against a complicated San Francisco defense. They now go to New Orleans, a far from ideal location and matchup, but looking at the Seahawks’ defense, any game can be a high-scoring matchup and Geno has responded. Trust if you lost Tua, Lance, Dak or have a difficult duel this week

I do not recommend playing Jared Goff (Lions, 33.6%) this week in New England, but after the break, he has many games in the dome and against bad rivals. He waits and it might come out cheaper later.

Marcus Mariota (Falcons, 38.6%): the volume of passes can increase without Cordarrelle and against some Bucs that could make them play at a disadvantage. He’s coming off a horrendous 3.86 that disappointed many, but the first three weeks he gave decent production.

Mo Alie-Cox (Colts, 0.3%): the Colts found their second choice after Pittman? Alie-Cox finished with 6-85-2. And perhaps the solution to the decline or loss of Jonathan Taylor would be to spend more.

One of my favorite strategies is rotate defenses, attacking the bad teams in the league. The really bad teams are separating to attack in the rotations. In the absence of Monday between Rams and 49ersthe five teams that give the most bonanza to rival defenses are Saints, Colts, Commanders, Patriots and Bears. They average 9.75 points against the rival defense; Just to illustrate the defense rotation technique: only four have averaged more than 9.75 points so far, and in 2021 only one finished the season above that figure.

One drawback for Week 5: The schedule (Seahawks, Broncos, Titans, Lions and Vikings) leaves a couple of unattractive options.

Packers (69.5%): half the world took them last week and they didn’t give as much as expected against Hoyer/Zappe (7 points), but a very favorable string is coming with Giants in London, Jets in Lambeau and Washington.

Eagles (63.0%): They go against the Cardinals, who insist on giving sacks and losses every week.

Vikings (22.9%): having only 6 points against the Saints without Mike Thomas, Winston or Kamara is a bad thing, but they return from London to play against the Bears and the sack machine named Justin Fields, who gave the Giants 16 points, one of our recommendations this week pass. The duel is also in Minnesota, with the noise factor of the most important venue in the league. A game against Miami follows before the bye.

Jaguars (13.5%): Philly scored 29 points against them, but they ended up giving up 9 on a defensive touchdown. You can’t replicate that, but they had stolen at least two balls the first three weeks, it was only one against the Eagles, and now they host the Texans in Jacksonville. oh! And they’re the #3 defense so far this season.

Broncos (30.1%): Thursday games tend to be low-scoring and now host the Colts, maybe without Jonathan Taylor. In their two games in Denver they added 7 and 14 points, in addition to taking at least 2 sacks in each of the first four games.