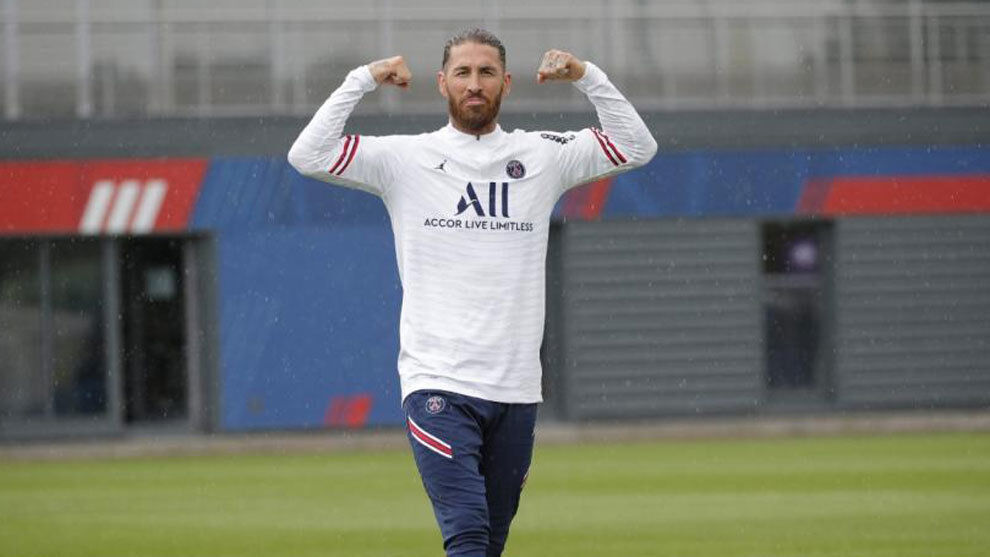 Everything is ready. Behind is the injury to the medial meniscus of the left knee who has only allowed him to play seven games in 2021 and the tendinosis of the semimembranous muscle of the left leg that did not let him say goodbye to the ‘green’ of Real Madrid and served as a ‘mitigating’ to Luis Enrique to leave him out of the list of the Eurocup.

ANDThe 35-year-old center-back missed the win over Le Mans (4-0) and the 2-2 against Chambly while finalizing his set-up, but this afternoon he will dispute his first minutes as a PSG player against Augsburg (7pm) in Orleans.

“The ‘staff’ can still change their mind and decide to continue with their training at the Camp des Loges, but this is not the trend “, warns ‘Le Parisien’, which affects that the Spanish international is planned to travel with the group to Loiret for the third pre-season test. “He has trained normally in the last few days,” they add.

Ramos will debut with PSG 13 days after make your signing official and 77 days after playing his last game for Real Madrid. It was in the second leg of the Champions League semi-final against Chelsea (2-0).

I feel good. During the summer I have rested physically and mentally. I come with enthusiasm and recharged batteries

“I feel good. During the summer I have rested physically and mentally. I come with enthusiasm and my batteries recharged. Now that I have joined the team, I must get into a good physical level and from then on try to give the best performance. I think I can compete for three or four more years at the highest level. The day I see that the body does not respond to me, I will stay home and retire, “Ramos advised in an interview with L’quipe.

The ex of the Real Madrid has three parties, along the way, to recover sensations. Two more must be added to the friendly against Augsburg. PSG will face Genoa on July 24 and will face Sevilla on the 27th. It will be a more than special match for Ramos.

With Ramos, but without Achraf or the internationals

Not all of it is good news for Pochettino. Ramos will lead the rear, but he will not be able to count on another of his ‘star signings’: Achraf Hakimi. The also ex-Madridista – signed from Inter for 60 million – is isolated with Edouard Michut after having tested positive for COVID-19.

‘Poche’ will not be able to count on Rafinha, Ander Herrera or Dagba either, that drag muscular discomfort. Juan Bernat is also out, who has returned to exercise with the group 10 months after his knee injury … but is not yet ready to compete.

In addition, PSG still does not have the plyade of internationals who have participated in the Eurocup and the Copa America: Danilo, Donnarumma, Verratti, Wijnaldum, Sarabia, Kimpembe, Mbapp, Di Maria, Paredes, Marquinhos and Neymar.

On the other hand, there will be important players like Keylor Navas, Abdou Diallo, Thilo Kehrer, Layvin Kurzawa, Idrissa Gueye, Julian Draxler and Mauro Icardi.

The tenth Spanish of PSG

PSG himself took the premiere of SR for sure yesterday: “Achraf made his first appearance against Le Mans and against Augsburg the second signing of Paris Saint-Germain will debut: Sergio Ramos.”

Achraf made his first appearance against Le Mans and against Augsburg debuted the second signing of Paris Saint-Germain: Sergio Ramos