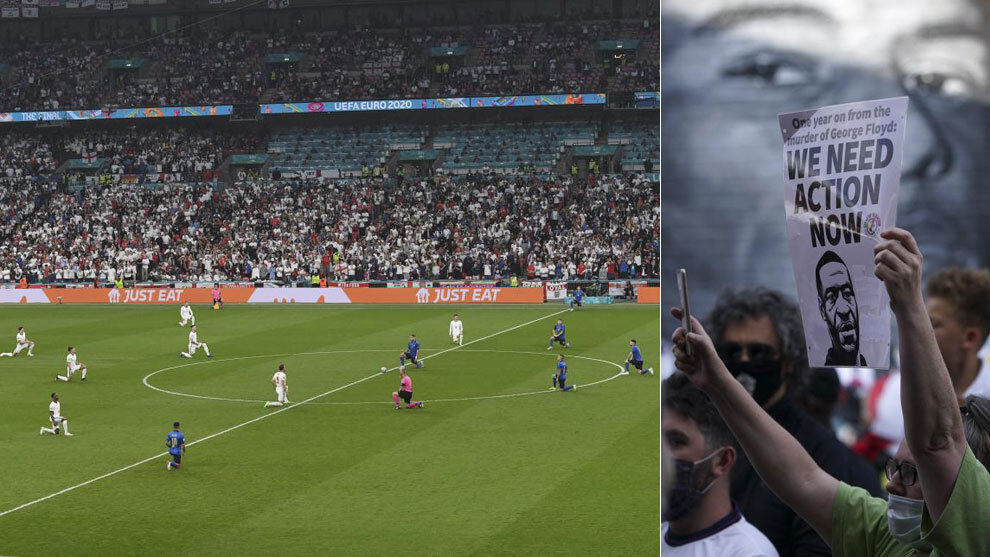 England he took three extra sports ‘claws’ after losing the final of the Eurocopa against Italy. Penalties missed by Marcus Rashford, Jadon Sancho and Bukayo Saka they generated a wave of despicable racist insults on social media that was covered by a tsunami of support.

“We have been a beacon of light to unite people and for the country to identify with the national team.

n “, Gareth Southgate noted, drawing the sentiment of a multicultural society from which xenophobia and racism have not yet been eradicated.” Hate will never win, “he confessed.

“I will not apologize for being who I am and where I come from,” he said.

. The attack on his mural in Withington and the public response exemplify both sides of a global problem.

England is a melting pot of cultures. Colonialism and emigration filled a nation with different languages ​​and origins that is reflected in the ‘Three Lions’.

“We are a team whose diversity and youth represent modern England”,

He pointed out on ‘ITV’ a Southgate leading a group with heterogeneous roots. Raheem Sterling was born in Kingston, Jamaica, came to London at the age of five and is now an English star.

They represent the best of England with their diversity, dignity and brilliant social conscience. They are uniting a nation sometimes caught in the division

Sancho’s parents emigrated from Trinidad and Tobago to the United Kingdom.

So did Saka’s from Nigeria. Jamaican blood runs through Kyle Walker and Kalvin Phillips. Rashford is of Saint Kitts and Nevis and Tyrone Mings of Barbados descent.

Ben Chilwell’s father arrived in the 90s from New Zealand and Declan Rice, Jack Grealish and Harry Kane could have played for the Republic of Ireland.

“They represent the best of England with their diversity, dignity and brilliant social conscience.

They are uniting a nation sometimes caught in division, “wrote Gary Lineker in ‘The Players’ Tribune.’

The knee to the ground, gesture in protest against racial inequality and police violence that was carried out in 2016 by the ‘quaterback’ of the San Francisco 49ers of the NFL Colin Kaepernick when the American anthem sounded,

. An action in favor of the ‘Black Lives Matter’ that England continued to do in the Eurocup.

“When children watch the games and ask why we kneel, parents can teach them to be together regardless of their race. It is vital,” Kane proclaimed.

However, during the friendlies before the Euro, some fans booed them.

And the whistles and applause were mixed at Wembley in the debut against Croatia. Premier Boris Johnson condemned them, but not all of them did so within the Conservative Cabinet. “This kind of thing divides us,” said the undersecretary of education, Gillian Keegan, on the ‘BBC’. “I do not support those who participate in this policy of gestures,” noted Priti Patel, Head of the Interior, in ‘GB News’.

When children watch the games and ask why we kneel, parents can teach them to be together regardless of their race

The Minister, also in charge of the harsh restrictions imposed on immigration by Brexit, described the racist insults as “disgusting”, which was answered by

“You can’t fan the fire by labeling our message as ‘gesture politics’ and then be upset.”

The attacks suffered by Sancho, Saka and Rashford have reached Westminster. “We will change the laws and the prohibition regime in football. We will work with the clubs. Fans who say racist insults to the players will not enter the stadiums”,

Fans who say racist insults to players will not enter stadiums “

. We know they have the technology to do it, “warned the Prime Minister.

April 30 and May 3, the Premier, the FA … turned off their networks in protest

. “It is unacceptable. This has to end now and those involved must be held accountable,” said Prince William.

It cost him nine months of sanction dividing the country. 29 years later and in a Premier in which 67% of its players are foreigners, the matter is still latent.

According to the ‘YouGov’ survey of 4,500 fans from nine European countries,

91% of British fans believe that racism is still a problem in football.

In England, in June, 54% rated it as serious, down from 57% in March. And about 30% consider that the response of the players of the ball has been insufficient. There is still work.