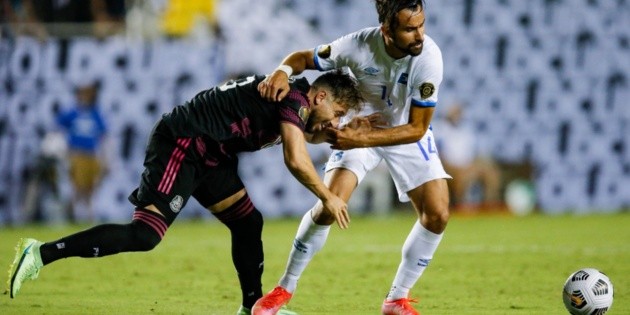 It is clear that the idea of ​​the team is not negotiable with Hugo Pérez at the helm. Despite losing 1-0 to Mexico, the game showed a different Salvadoran team, with more aggressiveness and with a clear tactic that the strategist never changed despite being cornered in several sections of the game. Thanks to her perseverance, Blue came close to winning the award.

Physically the team never fell and despite the goal in the first half, they continued to press and even dominate in the complement, leaving those led by Gerardo Martino with notable despair.

The selection came out with modifications in its starting eleven. With the main novelty of Álex Roldán on the right side, Hugo Pérez and his coaching staff also bet on two lines of four to stifle the Mexican’s exit, press his sides and avoid the possession of the rival.

The coach announced before the match that he would not go out to defend himself and showed it on the court. El Salvador withdrew its players but was also betting on trying to maintain possession in their favor against a team that, ignoring what happened in the first game, showed solidity in all its lines.

In the first minutes, the script worked for the national team, with the disadvantage that when Mexico overcame the pressure in the middle, it reached easily on Mario González’s goal, especially on the right wing in which Roldán had more difficulties to close spaces.

But those of Pérez tried to win possession of Mexico but it cost. The team had difficulties under the pressure of the rival. It was difficult for Marvin Monterroza to drop the ball over the mark of Rodríguez and Salcedo in the last line and after 15 minutes, the Aztec team was superior.

But the pace was unbearable. The Salvadorans retreated well and kept the script of the coaching staff, without throwing themselves to defend. But it was complicated, so the national team gave away spaces. Over 25 minutes, Luis “el Chaka” Rodríguez took advantage of an error in Alex Larín’s exit and faced the area to shoot at goal and score, with the complicity of Ronald Rodríguez, who deflected the ball. 1-0.

At 28 ‘they again took the Salvadoran rear by surprise and Rogelio Funes Mori had a hand in hand that Mario González sent to the band. The nationals began to show problems at the start.

Héctor Herrera was the orchestrator of the Mexican midfield. The Atlético midfielder gave balance and tranquility to the rival who dominated all facets of the game without regretting the high Salvadoran pressure at the end of the first half.

The first half was not bad for El Salvador. In fact, Hugo Pérez’s pupils managed to control 46 percent of possession and 84 percent of completed passes, showing that the team went out to play the Aztecs and did not back down, as the DT assured in the previous one.

The selection did not negotiate his style. He maintained his scheme and it did not seem, in the first minutes that the physical issue weighed on them. Another mistake in the defensive zone almost cost El Salvador the second but Mario González was once again attentive to the one-on-one with Funes Mori.

At 59 ‘El Salvador had the clearest after Roldán’s first intervention on the left but Joshua Pérez could not connect and the ball went wide.

Three minutes later Pérez had the goal again after an error in the Mexican start but the shot was blocked by the sweep of the two Aztec centrals but El Salvador continued to cheer up.

The blue and white did not shrink. Mexico showed problems at the start and the arrival of Amando Moreno gave the national offensive more verticality.

Alexander Larín drowned out the goal cry to the Salvadoran fans at the Cotton Bowl because, after the free kick, the ball hit the post before the astonished look of Talavera, who also did not explain how that ball did not enter.

El Salvador closed the last fifteen, surprisingly due to the national team’s antecedents, turned in attack and without fear of a rival that began to despair after Hugo Pérez’s men disarmed the midfield.

Walmer Martínez also warned 84 but the shot brushed the Mexican post. And the game did not give for more but with the classification in the bag, the game left good feelings.