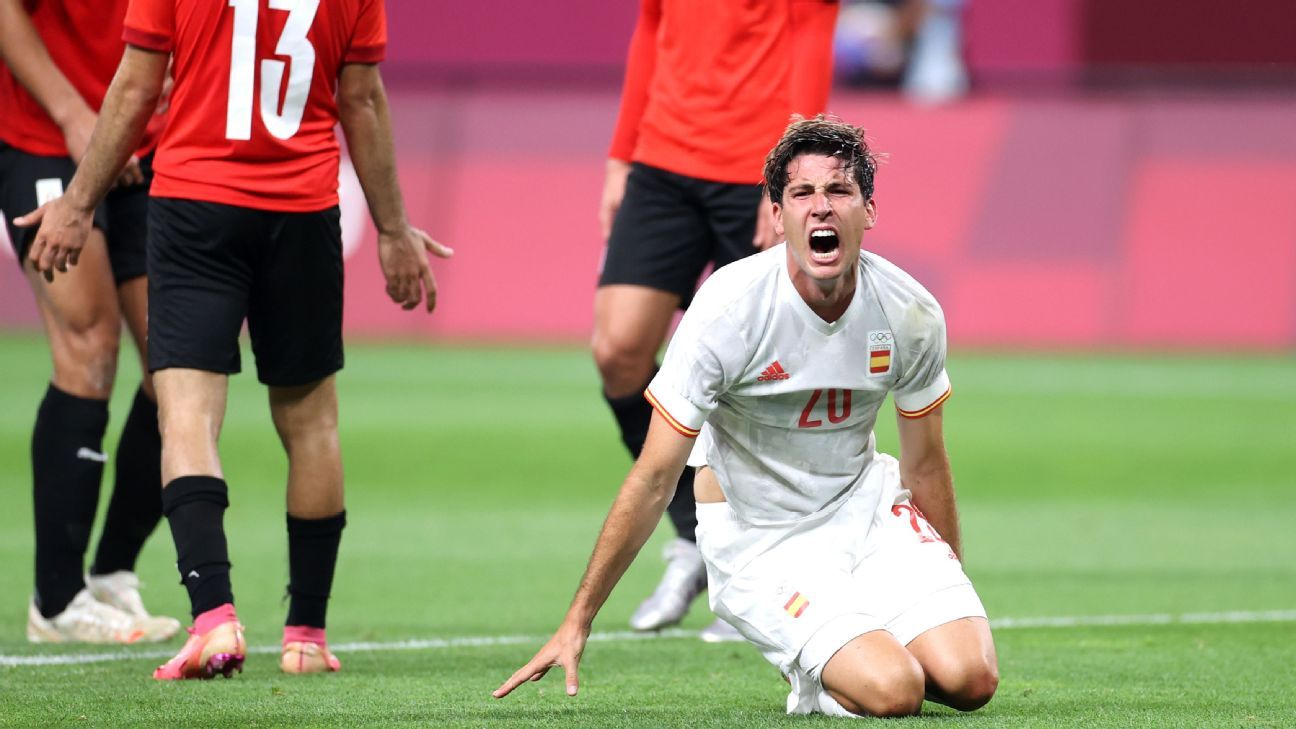 TOKYO (EFE) – Spain ran into this Thursday, in its Olympic debut in Sapporo, with a wall that demanded brilliance and spark to tear it down, and both were missing against a team from Egypt (0-0) that, in addition, was used harshly on the Spanish footballers and that he could see two red cards for each stomping on Mingueza and Ceballos, the latter causing him to leave the field due to injury as a result of the entry.

The summary of the first part was: 0-0, a shot on goal, another on the post and two injured; worst impossible. Óscar Mingueza left the pitch after suffering muscle discomfort in the back of his left thigh in a race to cut a ball into space that Ahmed Yasser Rayyan was chasing.

While with Dani ceballos, the best of the initial 45 minutes and protagonist of the shot at the post with a good shot from the edge of the area, the controversy arrived. In a split duel, Taher Mohamed stepped on his left ankle on the inside and buckled. The referee, next to the play, did not appreciate anything punishable.

They called him from the VOR room to see the play and he did not see enough reason to show the red card to the Egyptian player. Yellow, while Ceballos smiled ironically lying outside the field of play while shaking his head. He left without a shoe and without being able to put his foot down. His continuity in the Olympics depends on tests in the area when the inflammation goes down.

Two setbacks that also complicated Luis de la Fuente’s ability to react from the bench. With three changes, but only one window to make them. After 20 minutes of the second half in which there was no offensive reaction and in which the highlights were the entrances of Egypt, with another stomp on Pedri and a blow with Hegazy’s arm to the level of the face of Mikel Oyarzabal Inside the area, to which the referee did not indicate anything, the technician shook the tree.

A pure striker like Rafa mir Y Bryan gil stuck to the left band to look for alternatives, in addition to the freshness of Carlos Soler in the center of the field, but it was not the day. As demonstrated in minute 77 when Jordanian referee Adham Makhadmeh signaled a penalty on Miranda which ultimately turned out to be a foul at the edge of the area.

Spain tried to the end and was about to get a prize on the clearest occasion of the match. Minute 87 and Rafa Mir finished off a cross from Miranda inside the small area, unopposed, but it came out centered. It does not usually fail them, but the coin, except for the initial draw, did not fall on the side of Spain.

The draw, awaiting Argentina-Australia, can make next Sunday’s match against the Australians be treated as the first final of a tournament that does not wait for anyone, not even one of the favorites to win the gold.