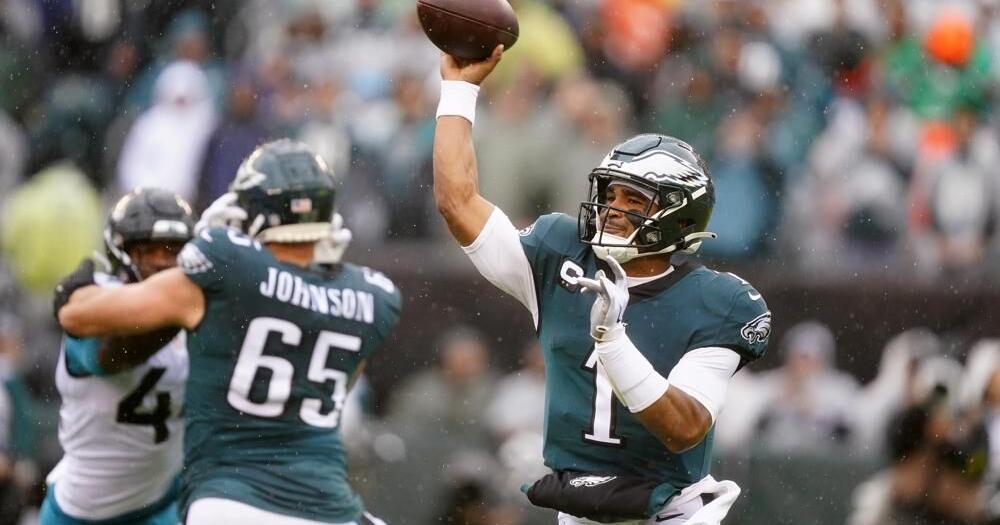 GLENDALE, Ariz. (AP) — Through four games, the Philadelphia Eagles are the hottest team in the NFL.

The Arizona Cardinals remember days like that, even if they’re fine with their current situation.

Arizona’s 2021 season could be a warning for the Eagles. The Cardinals faded down the stretch, losing four of their last five regular-season games before a lopsided loss to the Rams in the playoffs.

Cardinals quarterback Kyler Murray has said the first doses of humility this year, including a lopsided loss to the Chiefs in Game 1, could make his team more resilient.

“We started off slow this season,” Murray said. “We are entering the second quarter of the season and I think it is a great opportunity. We have a great team coming in. To be the best, you have to beat the best.”

The Eagles rank in the top 10 in most major categories in both offense and defense and have a 8+ turnover margin.

Quarterback Jalen Hurts has entered the MVP conversation with four standout performances to help the Eagles go 4-0 for the sixth time in franchise history. Hurts is first in the NFL in yards per attempt (9.1) and ranks fifth in the league in passing yards.

Kickers aren’t expected to be the toughest guys in the locker room. Jake Elliott certainly earned the respect of his teammates after his performance against Jacksonville.

The 167-pound Elliott was hit by cornerback Tyson Campbell on a 43-yard field goal attempt. Campbell was called for manhandling the kicker and the Eagles’ drive was extended. Elliott limped off later in rainy conditions, kicked a 28-yard field goal and limped off the field. Elliott, a Pro Bowl selection last season, was clearly sore. He missed Wednesday’s practice with a right ankle injury.

“Jake is one of the toughest people I’ve ever met, regardless of what position he plays. Everybody sees a kicker and thinks differently,” special teams coach Michael Clay said. “But he’s tough out there.”

The Eagles signed Cameron Dicker to the practice squad this week in case Elliott can’t play.

Eagles linebacker Haason Reddick faces his former team a week after one of the best games of his career.

Reddick was the Cardinals’ first-round pick in 2017, but he struggled until 2020, when the coaching staff made him primarily a pass-rusher. The linebacker responded with a career-high 12 1/2 sacks. He signed with the Carolina Panthers for 2021 before ending up with the Eagles this year.

“When I got here, he was a standup guy, and we were trying to make him a middle linebacker,” Cardinals coach Kliff Kingsbury said. “Finally, we said, ‘Hey, let’s try him where he played so well in college.’ He’s been amazing, he’s a great person, seeing how successful he’s been.

“You have to have a plan. He blew that game against Jacksonville last week by creating those turnovers there late, so we’ve got to find some way to try and slow him down.”

Cardinals tight end Zach Ertz is also facing his former team for the first time since arriving in the desert last year in a midseason trade.

Ertz played nine seasons with Philadelphia, where he was a three-time Pro Bowl selection and 2018 All-Pro. He also caught the game-winning touchdown in the Eagles’ Super Bowl victory after the 2017 season.

The tight end has become an important part of Arizona’s offense, catching 22 passes for 181 yards and two touchdowns this season.

“It will probably be a little weird for him,” Murray said. “He had a great career there. To go against them for the first time since he was traded, he’s probably going to have some emotions, I’m sure.”

The Eagles have nearly monopolized NFC Defensive Player of the Week honors. Reddick won it last week, following teammates Brandon Graham (vs. Washington) and Darius Slay (vs. Minnesota) to give Philadelphia players three straight weeks of winning the award.

Eagles: Why Hurts and team shouldn’t be trusted in Arizona