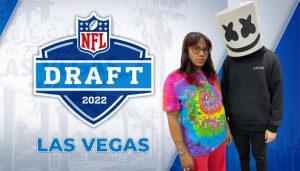 It is the theme “Estilazo”, which the urban artist interprets

The National Football League (NFL) decided to use the song “Estilazo” by Dominican Republic urban artist Tokischa as the official theme song for their 2022 Draft.

The action has been considered an “important” step in the Creole’s musical career, which has made her gain popularity outside her country.

The choice of the song is part of cultural integration and expansion to other countries, in addition to using a theme authored by a Latin American artist, the NFL surprised with the decision of ten teams that will announce their first round selection from various countries . This includes the Pittsburgh Steelers, Arizona Cardinals and Houston Texans, squads that will be making their selections from Mexico.

Despite the fact that the NFL chose the album of both artists to be used during the celebration of the 2022 Draft, the song and its video are scheduled to premiere on Friday, April 29. It is the first time in history that a musical theme by a Dominican is selected as the official song of the NFL Draft.

This will be the recruitment
College recruiting is just around the corner, where teams will be looking to beef up for next season. The first round is where the players who change the fate of the teams are usually found, although there will be eight who do not have a selection in the top 32 as a result of the changes.

The Bears, Broncos, Browns, Colts and Rams used their first round to trade for a franchise QB (Justin Fields, Russell Wilson, Deshaun Watson, Carson Wentz though he’s no longer in Indianapolis, and Matthew Stafford). The Dolphins had two picks, including one originally from the 49ers, but used it to land Jaylen Waddle in the 2021 Draft and Tyreek Hill a few weeks ago. The last team without a first round is the Raiders, who used it to get Davante Adams.

For the second year in a row, the Jaguars will have the No. 1 overall pick. They never had it before 2021, leaving only the Seahawks, Ravens and Broncos have never had the first pick in a Draft. Jacksonville drafted Trevor Lawrence in 2021, so they aren’t expected to draft another quarterback in 2022.

The order of the first round selections

Pittsburgh Steelers (9-7-1, eliminated in the wild card round)

New England Patriots (10-7, eliminated in the wild card round)

Arizona Cardinals (11-6, eliminated in the wild card round)

Dallas Cowboys (12-5, eliminated in the wild card round)

Buffalo Bills (11-6, eliminated in the divisional round)

Tennessee Titans (12-5, eliminated in the divisional round)

Tampa Bay Buccaneers (13-4, eliminated in the divisional round)

Green Bay Packers (13-4, eliminated in the divisional round)

Dominican song Tokischa will be official in the 2022 NFL Draft