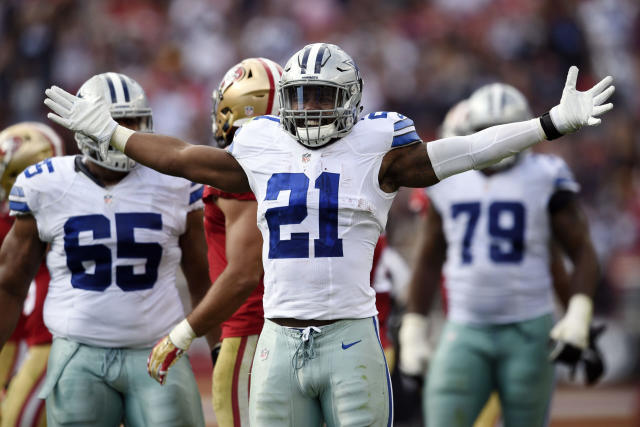 The disappointing way the 2021 season ended for the Cowboys continues to be talked about. It’s clear that the bitter elimination to the 49ers in the playoffs aroused much pessimism in the cowboy fanatic for the next season. However, it seems that the feeling regarding Dallas is shared by many in the league.

So lets see a recent report from ESPN’s Jeremy Fowler and Dan Graziano. According to both journalists, there is a “general feeling” in the NFL that the Cowboys blew their best chance to win a Super Bowl in the 2021 campaign. This is indicated based on different sources in the league, apparently being the “general opinion” around Dallas at the moment.

“There’s a feeling around the league that the Cowboys might have blown their best chance at a title in the current window.”

The reason for this general sentiment is clear: The Cowboys will likely have to let go of several key players in the coming weeks.

Let’s remember that the Cowboys are the third team in the NFL with the worst negative balance with respect to the salary cap. Right now, Dallas has $21.1 million over that cap. Only Green Bay ($48.4 million) and New Orleans ($76.1 million) have a more difficult situation.

But that is not all. The cowboy team has 21 players who will become unrestricted free agents next March. Among them are key players such as Randy Gregory, Dalton Schultz, Michael Gallup, Jayron Kearse, Leighton Vander Esch, and Bryan Anger, among others.

This means that the Dallas leadership must consider some contract extensions in the midst of its difficult financial situation. And that’s not counting the possible additions in free agency. Still, the Cowboys can find ways to gain cap space.

The easiest way to free up space would be to restructure Dak Prescott’s contract, which would give about $15 million under the salary cap. However, with the rest of the highest paid players, restructuring is not an option.

Such is the case with Ezekiel Elliott, who is already guaranteed his salary this year. Besides, making changes to his contract would leave Dallas without the option of being able to do without the player starting in 2023, when his impact on the salary cap would be reduced.

Likewise, restructuring the contracts of players like Zack Martin, Tyron Smith and La’el Collins could also be an alternative to gain flexibility under the salary cap. But this is something that the team would have to analyze carefully, due to factors such as the age and physical conditions of said players.

Now, the main dilemma revolves around two of the highest paid on the roster: receiver Amari Cooper and defensive end DeMarcus Lawrence.

Because of their contract structures, Dallas can do without them this year and gain significant cap space. Specifically, it would be $16 million when cutting Cooper and $19 million in the case of Lawrence. However, doing without them would have a negative impact on Dallas’ performance on both offense and defense.

With all of this in mind, the Cowboys’ front office has a real puzzle ahead of them heading into the 2022 season. Looking ahead, it’s very likely that the team will have to let go of some key players. Whether this is because they cannot afford their extensions, or because of the savings under the salary cap that their departures would entail.

If these exits occur, the Dallas roster would be weakened compared to 2021. A campaign in which, let’s remember, the Cowboys started as clear favorites to win Super Bowl LVI. However, the team’s offensive decline and its recurrent failures in various aspects of the game ended up condemning them to fall in the playoffs.

For these reasons, it is understandable that there is a general sentiment throughout the league around an eventual Lombardi Trophy in the hands of Dallas. Besides, the pressure that players and coaches will be under to deliver results may play against the cowboy team this year.

One thing that is clear, despite this, is that the Cowboys are firm candidates to retain the divisional title in the Eastern Conference of the National Conference. Both Philadelphia and Washington and New York have serious doubts about the quarterback job for 2022. In addition, the three franchises have many adjustments to make. As such, Dallas could once again dominate the division barring disaster.

Either way, we know the Cowboys’ roster has the talent and quality to make it to the Super Bowl and win it. However, the inability to take advantage of that potential, as well as the recurring mistakes on the part of the leadership and the coaching staff, can continue to condemn the cowboy team to failure. Therefore, many in the NFL believe that Dallas will not have another clear opportunity to be champions, and that a decline may occur next season.