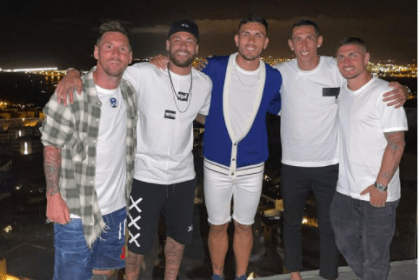 Many did not understand why on the day of the Copa América final, when Brazil had just lost the final (1-0) against Argentina, its archrival, in Maracana itself, the photo of the night was that of Lionel Messi, champion , and Neymar, loser, sitting on a ladder laughing like children. Now they begin to connect the dots …

Messi and FC Barcelona have made the final goodbye official and now the captain is looking for a team. Nothing less. And the world of football is revolutionized and many think if that image and one more from a few days ago, when Verrati, Paredes, Di María and Neymar coincided with Leo in Ibiza, it was more than a simple coincidence …

Nasser Al Khelaïfi, president of PSG, knows that money is not a concern, that something will be invented to have Neymar, Mbappe, Ramos and Messi on the same payroll, but he understands now the important thing is to sell him a winning project like the one he was asking for in Spain and had not in recent years, and give him a wardrobe where the singing voice is.
They are going to have to work on that from now on, on the basis of a player of proven efficiency and at an ideal moment, beyond his 35 years.

But PSG is not the only destination with the wallet and the project that the Argentine craves. A year ago, when the famous burofax he used to resign from the Catalan team became famous, Manchester City was talked about as the project that would give him titles in the present and a promising and profitable retirement plan.

There is Pep Guardiola, his mentor, his advisor and his friend of almost daily conversations. They have both admitted it multiple times. The DT has said that he suggested staying in Spain, but now that it will no longer be possible, he has the upper hand when it comes to convincing him: he has the team, the project because it comes from winning the Premier League and being a finalist in the Champions League League, which has been elusive to 10 lately, and everything in its favor to take it. In case something was missing, already in the past there was talk of a possible five-year contract, with two seasons in the Premier and three finals in the franchise that the club has in New York, from the MLS.

But here are some considerations: football in France is much more ‘gentle’ for the landing of a net winner, but that is already greater, while the devilish rhythm of the Premier can be a factor to consider, precisely because of age. and pressure. Although Messi is a privileged person who does not suffer more than necessary due to injuries, this issue can become worrying.

The other possible candidates are in Arab territory or even in Japan, where they have the luxury of buying whatever they want. But Messi still wants to keep winning and he knows he has options. Money, at this point, is not the problem.