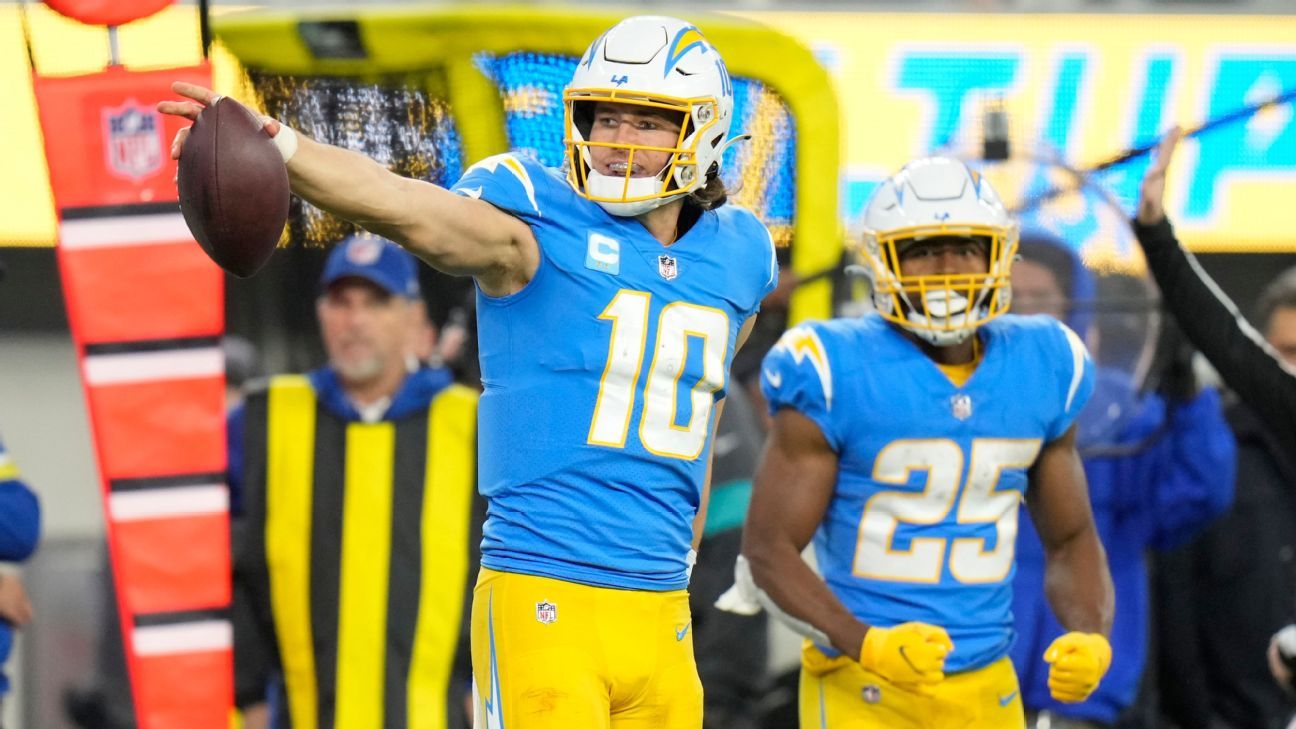 MIAMI — There’s a difference between having a great arm and being a great quarterback.

It is normal that we fall in love with measurables, because those passes that leave you speechless are enough to keep us waiting for more.

And they’re also enough to make any head coach think that if he does his job, he can turn this potential gem into a franchise quarterback.

Now, the quarterback position is so much more than just having a great arm; What’s more, I would argue that the positioning of the feet is as important or more important than the arm.

Playing the quarterback position essentially comes down to reading the defense, getting rid of the ball fast, knowing who to look for, being accurate and being a man leader.

If you later give us a spectacular play, welcome, but it’s just a bonus.

And why we keep falling for measurables is that quarterbacks like JaMarcus Russell and Jeff George are drafted so high, while others like Tom Brady Y brock purdy (yes, I said Purdy) they fall until the end of the draft.

Essentially if you don’t have the size, athleticism and arm, they let you through, regardless of whether you’ve mastered the art of quarterbacking or not.

Product of some of those gunmen becoming patrick mahomes either Josh Allen, those quarterbacks that all franchises dream of having, is that the teams will continue to make the same mistake in the future; because the few times you get it right you will get the perfect combination.

Which brings us to Justin Herbertand I clarify that he is a quarterback that I like very much and that he has had a formidable start to his career, that he has all the attributes, but that at the same time I consider that we are crowning the elite too early.

And again, it is no coincidence that I choose this moment to write about him, since he is coming off playing possibly his best game of the season, because we already know that after a performance like this, the praise will follow.

I’ve already stated in this very space that we should always provide context and that wins are not necessarily a quarterback stat.

The Chargers, once again, are a walking hospital. Their offensive line has suffered a myriad of injuries. Foster Sarell has been the owner, the same as Jamaree Salyer Y Storm Nortonwhich curiously has been one of the high points of that unit.

At the same time, he has not had his wide receivers Mike Williams Y Keenan Allenwho came back this week, and we already saw the difference they make.

Despite the odds, elite quarterbacks overcome obstacles, and if you don’t ask joe burrowwho went to a Super Bowl with one of the worst offensive lines in the NFL.

There are fewer excuses, and more productivity.

I repeat, Herbert is a very good quarterback, but he has not yet reached the elite echelon as many think.

The Los Angeles Chargers’ record with Herbert behind center is 22-23, and while it’s not a quarterback stat, it certainly influences how the game is handled. And while it gives us brilliant moments, I still see some inconsistencies.

A couple of weeks ago, former NFL linebacker and now analyst Emmanuel Acho called Herbert “a social media quarterback” because his best plays impress us, but the final product hasn’t quite come together yet.

I don’t agree with Oy, because Herbert is a special talent, who has somehow overcome obstacles, and although I don’t like to compare eras, as long as you set the record for touchdowns in your first two seasons, you are doing something right.

Now, I do think it’s fair to say that Herbert has stalled a bit in his progress in his third season.

I loved what I saw this week from Herbert, as he manipulated the pocket to perfection with his subtle moves and got rid of the fast ball.

It’s also fair to wonder how much the rib injury he sustained in Matchday 2 has affected him, although I’d say he has to get rid of the ball faster.

Herbert has already proven in his young career to handle pressure very well. But this season, a lot of the sacks he’s taken are because he’s holding the ball too much, too many times missing the easy completion to try to go all-out vertically.

And while these types of plays are useful at specific times, they are not the constant of success.

Unlike Herbert, young quarterbacks Joe Burrow and Jalen Hurts are blooming in their respective third seasons, and up to Tua Tagovailoa He has played better this year, although the Miami Dolphins quarterback has been stagnant in the last two weeks and, in fact, the differences between the two have been exacerbated in the matchup against each other.

So it’s worth noting that if they did that draft again today, I’m pretty sure most GMs would pick Herbert over Tagovailoa; sadly they will always be compared for having been chosen in the same draft in the fifth and sixth position.

Herbert’s ceiling is higher than all the quarterbacks mentioned, but from saying to doing is a long way.

Matthew Stafford perhaps the best example, since he also had a prodigious arm, but despite having productive years, he was essentially limited by the dysfunctional Detroit Lions franchise.

And when he was traded to the Los Angeles Rams, better accompanied in every way, he was crowned Super Bowl champion.

That’s the same ceiling Herbert has, but he’s currently nowhere near that quarterback; he gives us brilliant moments, but he is still too inconsistent.

The yardage and touchdown numbers are wonderful, but the sabermetrics tell another story. Not all five-yard passes are the same, as each play has a specific situation and each game faces a defense with different strengths and weaknesses.

The DVOA (Defense-adjusted Value Over Average) evaluates all the plays of the season, takes into account the opponent, the pressure that the quarterback is receiving in this case, and compares them with all the other quarterbacks in the NFL.

Very complicated to explain, but essentially it takes into account the context of each play to assess the true level of play of a quarterback, beyond the traditional statistics.

Currently, Herbert is ranked 21 of 32 quarterbacks in the NFL; that is, he is not playing the position at the level that he can play it.

Speaking of those around them, head coach Brandon Staley should be in the hot seat, and may have saved his job with the win over Miami; I don’t know if that’s good news or bad news for Los Angeles. I initially applauded his aggressiveness, but beyond taking a chance on fourth down or not, I see a lack of creativity in the Chargers’ offense.

It’s the risk you take when you hire a defensive-tinged coach. I personally think that when you have a young quarterback with Herbert’s potential, you should hire an offensive mind to maximize his potential, because if he doesn’t work out, no one in the franchise keeps his job.

Too many times we see Herbert trying to be a superhero instead of taking what the defense gives him.

When he came out of the University of Oregon, I thought he didn’t have the anticipation to shine at the next level right away, but he had two phenomenal seasons and he proved me wrong.

Mario Cristobal was blamed for having a run offense with the Ducks. Now I’m the one questioning Staley, and if the Chargers don’t make the playoffs, I think they should go in another direction (Sean Payton).

But there comes a time when Herbert has to take responsibility for his actions.

Herbert isn’t consistently finding the right man and the Chargers are ranked 14th in points per game and 29th in passing yards.

That’s why the Chargers have lost to the likes of the Jacksonville Jaguars and Las Vegas Raiders and haven’t consistently beaten so-called “minor” teams this season.

is that good?? #ProBowlVote + #JustinHerbert pic.twitter.com/aSzP56M6Go

Herbert may become a star, but he’s not yet, and this season he’s stalled.

The game against the Dolphins is what you should be aiming for, although I would like the coaching staff to give that offense more balance.

But it’s not fair to target everyone around him and not take responsibility for what has been a disappointing season by his standards.

Which brings us back to our initial premise: There’s a difference between having a great arm and being a great quarterback.

Taking advantage of today’s topic, I share with you youALL HERBERT’S TD PASSES IN 2021 to remind you of the kind of talent the Chargers quarterback has; whether he can maximize the potential of it remains to be seen.

*Local teams are in second place

As I always say, it is never good to play every game. In other words, there are some that are better to pass up. For this reason, I decided to add this section, to present my six favorite teams with a bet line. Opinions are welcome, since the idea is to add an attribute that is beneficial to readers. The order of the teams is not random and forecasts do not affect the total statistics.

There are many of us who are in this type of competition. In this case the bet line does not matter. Just don’t repeat any team throughout each week. Of course, these predictions will not affect the total statistics either. In brackets, the teams chosen so far.

I have always said that I am not a fan of teasers, since they come from the word tempting and are called “sucker bets”, but, at the request of several of our readers, we have added this section. Here, as there are three teams, the line is modified by 6 points, but you must hit all three to collect. Below, I name the three teams with the altered lines in parentheses.

At the request of several of the readers, we include a party of highs and lows for each week.

Surprise of the Week (no line):

Fixed of the Week (without line):

Fixed of the Week (with line):

Opinions or comments: Via Twitter/Instagram/Facebook @SebastianMCESPN — please read this legal warning before submitting your comment.

Diagonal Guru: Difference between having a great arm and being a great quarterback