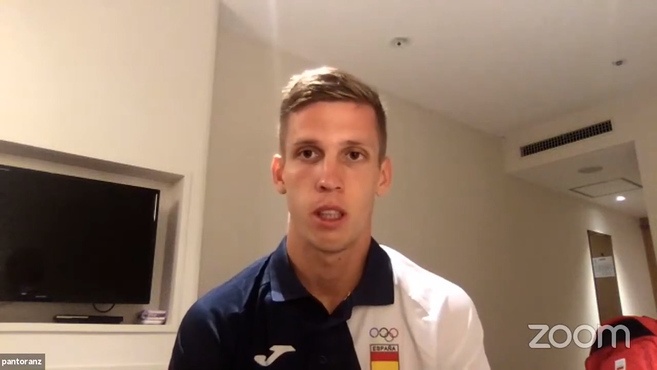 Dani Olmo analyzed the tie of the Spanish National Team in Sapporo next to Alexander White, president of the COE, who wanted to send his encouragement to the player of the national team, noting that “you are an extraordinary group, an impressive team has been formed but nobody is going to give us anything. They all know how great players you are and they will try to prevent you from winning. the spirits and match by match the team will take cruising speed to reach the final and win it. Confidence is unlimited and thank you all. See you at the match of Australia“.

Dani Olmo He stressed that “nothing of what we have achieved has been easy, but we know that we have two games and we want to win them, we will go to that, as always.”

Tie: “It is clear that it was not what we wanted, we wanted to win as always. We knew that Egypt was going to lock in behind, but we had to play as usual, attacking with our weapons. We lacked a bit more verticality, but it’s good, within the draw there are things to improve and we will work on it. ”

VAR decision: “It seemed strange to me that he did not check the yellow after seeing the VAR. There was no doubt that that entry was a reason for expulsion. Then, the referee’s criteria is something else. We don’t have to get involved, it’s not an excuse. Damn because Dani and Óscar are important and hopefully they recover as soon as possible. “

Little danger: “The feelings are now hotter than normal because after the draw, also individually speaking, maybe I should have dared something more, but they are things I do from self-criticism. It is the way, we will correct mistakes”,

Physically: “Óscar and Dani are fine, their ankle area is somewhat swollen but I hope that in the next few days they can go better and train these days. Óscar had discomfort in the hamstring. Regarding the fatigue, I am well, motivated and strong. I wouldn’t have told the coach that I wanted to come. You have to be realistic, being here is a dream for me. “

Physical improvement: “It was difficult for us to acclimatize due to the change in time and the conditions, but we have been here for a week now. It is not an excuse, we are all perfectly acclimatized and we have to go to win. The conditions and physical condition should not be an excuse.

Sensations: “We are positive at all times, we trust in what the group can achieve and that is our mentality. We are 22 in the team, four have not been able to change, and we have all gone to one and we have to continue. things but we trust ourselves. “

Pressure to be favorites: “In a certain part, it is possible to think that we are favorites because we have high quality players, we have players of a lot of name. But we do not think about that, we always have the same mentality and we think that we must go to win in each game. We will show it the next Sunday”.