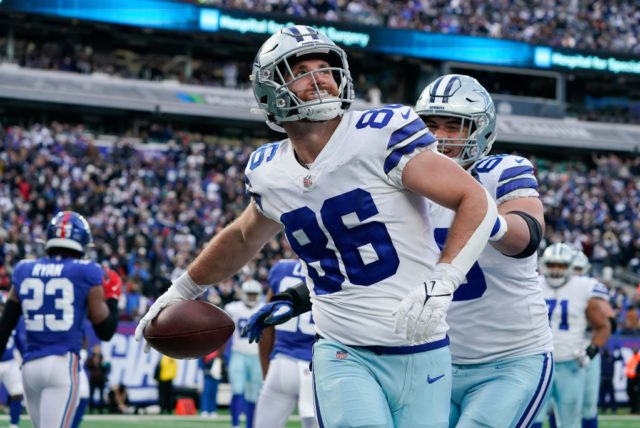 With a little less than a month to go before free agency begins, many eyes are on cowboy nation. 21 Cowboys players are up in March, and the team’s salary-cap situation is a bit tricky. This leaves the front office having to weigh many factors when deciding whether or not to extend the contracts of various players, including tight end Dalton Schultz.

On paper, Schultz should have earned his continuity with the cowboy team. After exploding in the 2020 season taking over from the injured Blake Jarwin, 2021 fared even better. Schultz had 78 receptions for 808 yards and eight touchdowns, capping his best NFL season in numbers. Besides, he was the second Dallas player with the most receiving yards and established himself as the starting tight end.

But that is not all. Compared to the other starting tight ends in 2021, Schultz was well positioned. He was third in receptions behind the likes of Mark Andrews (Ravens) and Travis Kelce (Chiefs). Additionally, he was sixth in receiving yards and fifth in touchdowns. Additionally, Pro Football Focus (PFF) rated him as the sixth-best starting tight end of the season, with a score of 78.2.

Dak Prescott to Dalton Schultz for a Touchdown and a 2 point conversion! #LVRvsDAL pic.twitter.com/o6aHKZ3mt6

There’s no question that Dalton Schultz’s market value will increase heading into free agency because of this performance. However, that poses a problem for the Cowboys.

While the front office would be happy to keep Schultz on the roster, the reality is that they may not be able to afford his contract extension. Right now, the cowboy team has $21.4 million in excess of the salary cap for 2022. And this is something that limits it to undertake the possible extensions of players like Randy Gregory, Cedric Wilson, Bryan Anger, Michael Gallup and Schultz himself. , among others.

Besides, the cost of Schultz’s extension may not fit into Dallas’ finances. According to Spotrac data, the Stanford product would be worth a projected $12.6 million a year. If he gets a contract with that amount, Schultz could enter the top 5 of the highest-paid tight ends in the NFL.

Right now, one way the Cowboys could cost Schultz is by cutting one of their two highest-paid players: wide receiver Amari Cooper or defensive end DeMarcus Lawrence. Doing without them would mean saving 16 and 19 million dollars respectively. This would give Dallas oxygen under the salary cap, thus allowing them to undertake any contract extensions they intend to make.

Now, Dalton Schultz’s departure could have a negative impact on the Cowboys’ offense. The Stanford product has established itself as one of the most reliable targets for Dak Prescott’s passes. And although he has aspects to improve in his game, his contribution to the team is undeniable. And maybe that’s something Dallas can’t cover right away.

Letting Schultz go would mean trusting Blake Jarwin to stay healthy. However, the fact that he missed the entire 2020 season and a good part of 2021 due to different injuries does not invite optimism. Aside from Jarwin, Dallas would also have Sean McKeon and (possibly) Jeremy Sprinkle at that position. But this could imply a decrease in offensive production.

On the other hand, it’s worth mentioning that Schultz would be highly coveted by several teams looking for a tight end in free agency. In fact, many analysts project the Stanford product as an ideal player for the New York Jets, who would seek to surround young quarterback Zach Wilson with offensive weapons. However, more suitors may emerge in the coming weeks while the player’s future remains uncertain.

For now, we will have to wait until mid-March to find out what finally happens with respect to Dalton Schultz. It’s true that the Cowboys can make some adjustments and contract restructurings to gain salary-cap space. However, this may not be enough to prevent certain key players from leaving in free agency. If this happens, and the leadership fails to find guaranteed replacements, Dallas’ performance in 2022 could decline markedly.