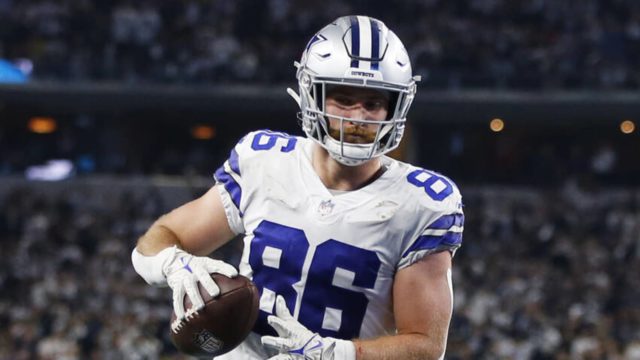 For the second year in a row, Dalton Schultz is facing a pivotal season for his NFL career. However, the situation is different from 2021, the last year of his rookie contract with Dallas. The tight end will play this year under the franchise tag, this after an agreement was not reached with the Cowboys management for an extension.

On the Schultz side, there’s obviously some frustration about not getting a deal done this year. But what’s done is done. Now, the Stanford product will be focused on the coming season. He even expressed that he will not talk about his contract from now on, at least until it is time to resume negotiations.

“I would be lying if I said I wasn’t disappointed”Schultz told reporters after Thursday’s camp practice. “As I get through that, I am at peace knowing I did my best. I’ve had my emotions about this, but I’m focused on camp, getting better. This is where I want to be. I said it from the beginning, and I will continue to say it.”

Dalton Schultz on not getting a long-term deal: “I’d be lying if I said I wasn’t disappointed. As I move past that, I’m at peace knowing I put my best foot forward. I’ve had my emotions about the whole thing but I’m focused on camp, getting better. … This is where I want to be.” pic.twitter.com/6aCLzCFRj8

Added to Schultz’s will to want to continue in Dallas in the future is the optimism in the Cowboys’ leadership. In fact, there is confidence that an agreement can be reached for an extension next year. This was expressed by Stephen Jones, executive vice president of the team, during the press conference prior to the start of camp in Oxnard.

“(Schultz) represents everything we want in a Cowboy, both on and off the field”Jones told reporters Tuesday. “I think it will happen. I think Dalton will be a long-term Cowboy here.”

Cowboys did not reach a long-term contract with franchise-tagged TE Dalton Schultz this offseason. EVP Stephen Jones: “I think we ultimately will. I think Dalton is going to be a long-term Cowboy here.” Schultz embodies team’s emphasis on availability, he said. pic.twitter.com/mv9zXmzfhz

Let’s remember what happened during the offseason. After his rookie contract with the Cowboys expired in March, Dalton Schultz signed the franchise tag that ensured his continuity for this year. This, in turn, gave time until July 15 for the player and the team’s leadership to agree on a new contract.

However, Schultz watched the offseason go by with no progress in negotiations. Likewise, the Stanford product saw David Njoku, a Browns tight end who was also under the franchise tag, receive a four-year, $56.75 million extension.

Njoku’s extension with Cleveland, it’s worth mentioning, carries an annual salary of $14.18 million. This makes him the fifth highest-paid tight end in the NFL, despite producing well below the highest-paid. In fact, Schultz’s numbers in 2021 (78 receptions for 808 yards and eight touchdowns) are higher than Njoku’s in the last two seasons (55 receptions for 688 yards and six touchdowns).

Browns extended TE David Njoku for 4 years up to $56.75M with $28M guaranteed, per @ByNateUlrich. His production of him vs. Dalton Schultz, whom Cowboys tagged?

Of course, Njoku’s extension raised Dalton Schultz’s salary claims. Also, seeing that there was no progress in the negotiations, the tight end decided not to attend practices during the last week of organized activities (OTAs) in Dallas. However, since he had already signed the franchise tag weeks ago, Schultz had no real way to pressure the team into agreeing to an extension this year.

Because of this, the situation took the expected course. The deadline of July 15 arrived, this without both parties reaching an agreement. This means Schultz will play this year under the franchise tag, and negotiations for his extension will resume in March 2023.

However, this puts the situation back in Schultz’s hands. After having his best seasons in the NFL in the last two years, it is now up to him to prove his worth once again. If he puts up records better than 2021, the tight end will have a case for a new contract. Either this with Dallas, or with another team that might be interested in him.

For now, the situation is clear. Dalton Schultz must now focus on having a great season, and the Cowboys will have to decide if they will indeed sign him next year. With the negotiations paused until 2023, it remains only to see if Schultz actually performs according to his salary claims.

Dalton Schultz wants to stay in Dallas, and Stephen Jones is confident he can