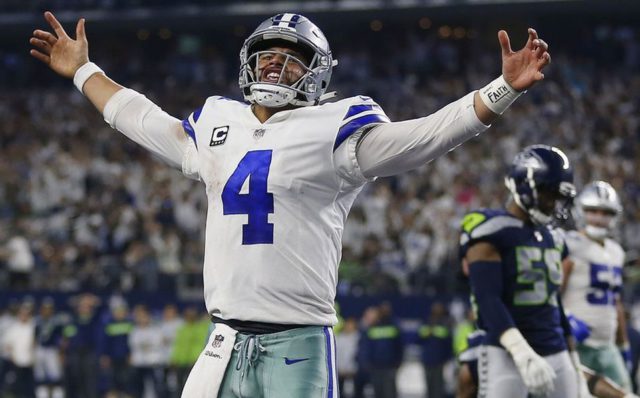 It’s no secret to anyone that the Cowboys’ 2021 season got off to a great start in its first six weeks. Going into the bye week, the Lone Star team only finished with a Week 1 loss to Tampa Bay. Where it should be noted that it was extremely close since they would end up losing by 31 to 29.

However, from week 9 onwards, the team began to show a lot of flaws that simply could not be completely covered despite the good results. With everything and the fact that Dallas finished with a 12-5 record, it was only a mirage of what ended up being seen in the wild card round against the San Francisco 49ers. Where the Cowboys would be the only team in the entire first phase of the postseason to be defeated at home.

Now, Dallas will have to make the relevant evaluations again to be able to take the team to the top in the next campaign. It will not be an easy task, especially since there are 21 free agents without any restrictions. Along with this, contracts will have to be restructured and there is even talk of the departure of distinguished elements of the organization such as Amari Cooper and DeMarcus Lawrence. However, the objective is the same, that Marshal Dak Prescott is in charge of guiding the team to victory.

“This is all about number 4,” Stephen Jones said last week on the sidelines of the Senior Bowl. “That’s what this league is about, it’s powered by the quarterbacks. We feel like we have one of the best in the championship, if not the best. It’s about him, and we have to keep putting the pieces around him.”

Cowboys EVP Stephen Jones: “This whole thing revolves around No. 4. That’s what this league is all about. It’s a QB-driven league. We feel like we got one of the best in the business, if not the best. It’s all about him. We have to continue putting the pieces around him.”

With these statements, Stephen implies that the organization continues to have full confidence in its Franchise Quarterback. Despite being one of the main players in the team’s poor performance and the fact that he was not seen against much more dangerous teams during the regular season. Consequently, he was also absent during the game against the 49ers.

However, there are a few things the organization will have to fix for Prescott to perform better in 2022. One of them without a doubt is the running game. Ezekiel Elliott was once again indebted to the franchise despite putting up more than a thousand yards in 2021. His game was practically non-existent from the bye week onwards and the truth is that he left a lot to be desired. In the postseason against the San Francisco team, he managed just 31 yards on a total of 12 carries.

Much of the ill-fated running game in the wild-card round is credited to offensive coordinator Kellen Moore. Who will finally be staying at least one more season with the Cowboys in 2022. Amid the accusations, he is blamed for not using a much more complete running back like Tony Pollard. A player who not only proved to be better on the ground, in passing and even on special teams.

Also, next season Pollard will enter his contract year and the most logical step should be to use him more. After all, the Cowboys were averaging 164 yards per game through the first six weeks of the season. However, in the five losses after the bye week, including the one in the postseason, they averaged only 64 yards per game. Certainly this didn’t help Prescott at all.

“If you look at the theme of all these postseason games, the 49ers that beat us, that team was running the ball,” Jones said. “The Rams run the ball. Once you start to handle the ground game well, then everything else opens up and makes it a lot easier.” Indeed, the 49ers had 169 yards at AT&T Stadium along with two touchdowns. Which made things easier for Jimmy Garoppolo. Since the rival quarterback would go blank on touchdown passes during the duel against Dallas.

The first sliming of the day…@EliMitch15 enters the SLIME ZONE! #FTTB

Another fundamental aspect with which the Cowboy Marshal must be supported is avoiding penalties. Dallas managed to be at the top of this stat with 168 overall. Including if you manage to subtract the 27 that were rejected, there are still 141 of them. Of all these, 76 were awarded to the offensive.

It is something that clearly leaves a lot to think about. Between 38 holding penalties, 20 of them for false starts, six for delays in the game and many more, the Cowboys missed many opportunities to move further down the field. Total holdings alone made them lose 373 yards. And many of these were in third-down situations where the cowboy offense had really been able to move forward. Also, let’s not forget that left guard Connor Williams was one of the big names in this grim stat.

Certainly, this is something that could be avoided and adjusted. But he became a constant problem throughout the season and ended up taking its toll in the wild-card round. The truth is that the shortcomings that the Cowboys had were not fixed in the playoffs. Rather, they were placed much more in evidence and ended up in the result that we all ended up seeing.

If all this is corrected, clearly Prescott will be able to perform better by 2022. However, if the problems continue, we may see a Cowboys that look very intimidating in the NFC East, but that will not be the case in the NFC East. playoffs. There are months to spare to correct all these topics, but the truth is that patience is running out and it must be done as soon as possible.

Dallas needs to find a way for Dak Prescott to succeed