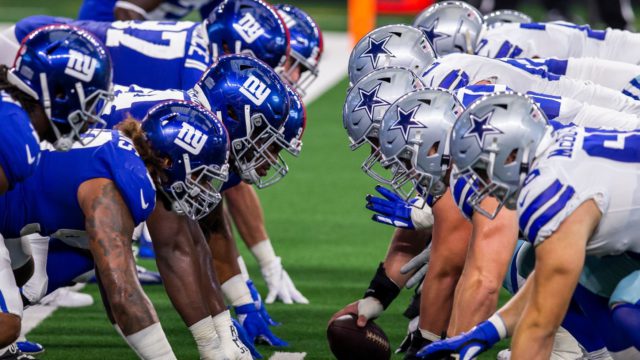 The Cowboys get their 10th win this season, beating a Giants who didn’t really fight much at home. After all, the NFC East rival arrived at MetLife Stadium with just four wins this season and with the new setback against the Cowboys, they already have a total of 10 losses. This is the opposite case of Dallas, who after winning this Sunday afternoon by 21 to 6 hold a record of 10-4 and continue to be the absolute leaders of the division.

Now, there are some aspects that must be emphasized in this match and the most important of them has to do with defense. Again, the group headed by defensive coordinator Dan Quinn took to the field with every intention of stopping the New York team’s offense. And just as it happened against the Saints and Washington, once again the cowboy defense has once again faced an offensive group that is not quite forceful.

The first action to note of the defense of the Cowboys had to do in the first offensive series of the Giants. It would be the Cowboys’ first interception of the game, but much of the result had to do with DeMarcus Lawrence. The defensive end would put pressure on the opposing QB at third and five for cornerback Jourdan Lewis to handle the interception. Likewise, the defensive back would gain 18 yards from this action.

In another decisive play where Dallas was already in the lead 6-0, the Giants were looking to score with a TD to get closer on the scoreboard. However, again in third and five this could not be thanks to the great feeling of the Micah Parsons team. Who despite not being able to increase his numbers in sacks in week 15, executed cornerback work in this action. Carrying out coverage actions and preventing rival receiver Kenny Golladay from getting the ball.

Consequently, the New York team had to settle for a 35-yard field goal. To keep the partial result from 6 to 3.

Within seconds of reaching halftime, Dallas would have another comeback and it would be through a fumble. Again D-Law became the protagonist of a defensive action and managed to get the ball from running back Saquon Barkely. With the ball on the field, defensive tackle Carlos Watkins would take care of keeping it. Where the Cowboys already had a wide advantage of 12 to 3.

However, the defensive actions would not end after halftime. Now almost into the fourth quarter, safety Malik Hooker would get another interception at second and seven after a missed pass from Mike Glennon to Sterling Shepard.

And last but not least, with just over eight minutes to go, Trevon Diggs would finish with his 10th interception of the season. Leaving just one of these to tie the franchise record of Everson Walls, who finished with eleven interceptions in the 1981 campaign.

What is noteworthy about this action, aside from Diggs’s great play that wiped out any hope for the Giants to come back, is that they weren’t worth it in the first place. In fact, the decision had been an incomplete pass to Kenny Golladay. However, head coach Mike McCarthy decided to challenge the play and after a proper review, Diggs’s interception was validated.

There are two aspects to note that are very important for the cowboy defense, which is something to note in this 2021. The first of them has to do with the fact that Trevon Diggs has his 10th interception and Micah Parsons has 12 quarterback sacks. With these numbers, the Cowboys are the first team to record teammates having double digits in interceptions and sacks since the San Diego Chargers in 2007.

On the other hand, the team already handles 22 interceptions so far this season. Still with three games to go, by now last year the franchise had only seven. This is another great example of the Lone Star team’s defensive upgrades.

Cowboys have an NFL-high 22 interceptions in first 14 games. They had seven at this time in 2020.

However, not everything can be applauded in Dallas as the offense still owes a lot. There are already several weeks in which the defense has responded and he is the one who has shown his face in the results. Faced with a poor opposing defense, which really couldn’t offer much, the cowboy offense only managed to produce 21 points. Of which nine of them were for field goals and only two touchdowns. Where it is also necessary to highlight the fact that Greg Zuerlein missed the extra points of the touchdowns.

Dak to Dalton for SIX. @DallasCowboys take a 21-6 lead.

Likewise, some cowboy recoveries, although not in vain, could have earned more points. The perfect example is the recovery of Carlos Watkins, where the offense, starting from the Giants’ 46, failed to capitalize on a touchdown. Instead, they had to settle for a 27-yard field goal from Greg Zuerlein. Apart from something common in some situations, which is mishandling the clock, without using the time out at the right time.

On the other hand, neither the interceptions of Malik Hooker or Trevon Diggs led to anything. In a match that could really be sentenced much earlier, the offense continues to suffer on third chances. Prescott would end his stint for Week 15 with 28 completions of 37 for 217 yards and a touchdown.

However, he would also lose a ball in the middle of the fourth quarter thanks to a sack by linebacker Lorenzo Carter. This would result in New York defensive tackle Austin Johnson recovering.

Without a doubt, it has already become a bit tedious that the Cowboys offense does not finish sentencing the games after the great performance that the defense puts on week after week. There are still three games to go to finish the regular season. And the most advisable thing is to review the failures as soon as possible so as not to reach the postseason with these failures. If not, the Cowboys will have a lot of trouble, especially trying to get to the end zone. Despite the criticism, the passing game looked a bit more fluid than in previous weeks, but nothing beyond that.

Now we have to prepare for the game against the Washington team next Sunday night at AT&T Stadium. If everything goes well, the Cowboys will get another victory in a season that has been very fruitful despite the offensive attrition in recent weeks. In any case, victory must be sought again at all costs.

Dallas keeps winning, but that’s thanks to its defense