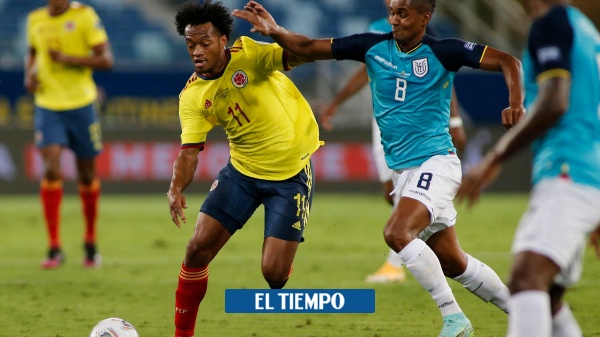 Juan Guillermo Cuadrado, one of the leaders and referents of the National Team that is in the Copa América, referred to what happened with James Rodriguez and he criticized the press for the interpretation it gave to his words after the victory against Ecuador.

The player spoke on a live Instagram, at the same time that the Colombian Football Federation held an official press conference, in which they spoke Luis Fernando Muriel Y William Tesillo.

“I just wanted to tell you that it had nothing to do with James, we would like him to be here, but it is not a decision that we made. I hope I can be here again in this great family, in this great National Team ”, explained Cuadrado.

“We have to review what is coming out of the heart when we are speaking.”

Cuadrado also sent a kind but tough message to the press: “I want to invite journalists that, beyond all they can say, if we use the influence that God has given them, remember that when they are talking about a player They are parents, they are families, they are children, how can a mother, a child feel, hearing things from a father that they are not ”.

“We have to review what is coming out of the heart when we are speaking, you can give your point of view being a professional, not speaking badly. As professionals we will understand that it is their job, ”added Cuadrado.

“We accept all constructive criticism, we do not live on that. Those who live off the applause of the people are going to die from criticism. We accept all kinds of comments, but when they are destructive, that you can see that you are destroying a person who has a mother, a father, how can you make those people feel when you speak in a way that is not appropriate, “he said.

(In other news: Copa América 2021: new summoned to the Colombian National Team)

Finally, Cuadrado sent a final message of optimism: “We are increasingly united and that each one, from wherever they are, can contribute to make Colombia stronger and stronger. The change is in each one of us, in our hearts; each one contributing a grain of sand we can achieve it, that we can be supporting each other and being in union. In the union there is the blessing and if we are united, not only for the National Team, but for Colombia, I know that God can support all that ”.