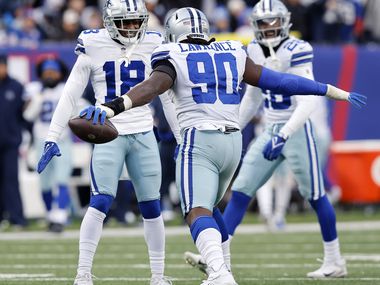 The Dallas Cowboys won the championship of the East Division of the National Conference and after defeating the Washington team 56-14 at AT & t Stadium.

With the divisional title in their possession, the Cowboys now have the second-best record in the National Conference at 11-4, tied with the Tampa Bay Buccaneers and the Los Angeles Rams.

With two games to go in the regular season, the Green Bay Packers have the best record in the National Conference at 12-3.

The lowest that the Cowboys could fall in the seed of the teams that will play the postseason is to the fourth position so it is already certain that they will hold at least one playoff game in their stadium.

Under the current postseason format, only the No. 1 seeds in each conference receive a bye in the first round of the playoffs.

The other six teams from each conference meet on Wild Card Weekend.

Considering all those elements, the Cowboys would be hosting the Philadelphia Eagles in their first postseason game.

The Eagles, who are 8-7, are seeded number seven in the playoffs.

The Cowboys face the Arizona Cardinals at AT&T Stadium on Sunday, January 2, in a game corresponding to week 17 of the NFL and will close their regular season visiting the Eagles.

Another team that could rival the Cowboys in their first playoff game is the San Francisco 49ers, which so far ranks sixth in the seed at 8-7.

The New Orleans Saints, Minnesota Vikings and Atlanta Falcons still have hopes of making the National Conference playoffs and potentially being rivals to the Cowboys.

It should be remembered that this is the first season in NFL history in which 17 regular season games are played.

Cowboys: Which team will Dallas face in the playoffs?