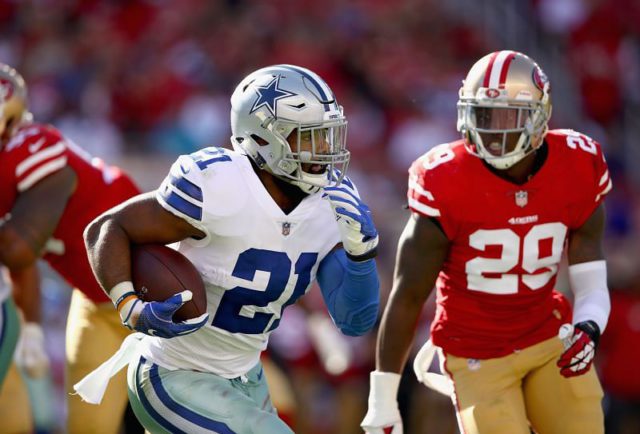 Many were sure the Cowboys would meet the Cardinals in the wild-card round of the playoffs. However, a turn of events this Sunday afternoon turned things around. Dallas rose to third place in the NFC, and now it will face a rival with whom it has a historic rivalry: the San Francisco 49ers.

This Sunday will be the 38th game in history between the two, in a lifetime series that is in favor of Dallas by a score of 19-17-1. However, the rivalry between Cowboys and 49ers is notable for their playoff crashes. In total they have met seven times in that instance: once in the divisional round and the other six in the final of the National Conference. Therefore, this weekend will be the eighth.

Next, we are going to give a brief review of this historic rivalry that will be renewed in the playoffs this season.

The first game between the Cowboys and the 49ers dates from the 1960 season, the Cowboy team’s first in the NFL. That game ended with a 26-14 victory for San Francisco. Otherwise, the duels between the two in the 1960s were limited to regular season games. And it was at the end of that decade when the only tie between them occurred: 24-24 in the 1969 season.

Then, beginning the next decade, the rivalry went to another level. Between 1970 and 1972, both teams met consecutively in the playoffs, with the Cowboys winning on those three occasions. The first two were in the NFC final, after which Dallas lost in the Super Bowl in the 1970 campaign and won it the following year. Already in the 1972 season, the cowboy victory would come in the divisional round.

#A day like today in 1971 the NFC Championship was played #NFL The #DallasCowboys they defeated the San Francisco # 49ers #FTTB 17-10 and qualified for the first Superbowl in the history of the glorious Texan franchise @NiniaChef @LAuTrEK pic.twitter.com/k28tyJGbDo

In short, the 1970s were marked by the Cowboys’ dominance over the 49ers. Of the seven times they met in total, counting the regular season, Dallas won six of them. Time in which, remember, Dallas had Roger Staubach as a quarterback. However, this would change in the following decade.

80s: “The catch” and dominance of the 49ers Francisco in the series

The first game between Dallas and San Francisco in this decade occurred in the 1980 campaign, with a resounding 59-14 cowboy victory. However, then came a total dominance of the 49ers led by Joe Montana as quarterback, achieving five victories in those years. And the most memorable occurred in the 1981 season, being the first for the Californian team against Dallas in the postseason.

In that season’s conference final, the 49ers defeated the Cowboys 28-27. This duel was marked by a play immortalized as “The Catch” (or “The catch”). With 51 seconds left in the game, catcher Dwight Clark landed a big jump to catch a Joe Montana pass to the back of the end zone. This gave victory to San Francisco, who would later win the Super Bowl in the next game.

Joe Montana to Dwight Clark in the 1981 NFC Championship.

Then, in the 1990s, the rivalry would reach a new ceiling. Both teams were protagonists of the NFC final in three consecutive seasons (1992 to 1994). On these occasions, the winner then won the Super Bowl in the next match. The first two games were won by Dallas, while San Francisco won the third of them.

A storied anecdote comes from the 1992 season’s NFC final. Following Dallas’s victory, head coach Jimmy Johnson was filmed saying his iconic “How ’bout them Cowboys” line in the locker room. After this, Johnson would win two Super Bowls in a row commanding the cowboy team.

Dak Prescott on Jimmy Johnson’s famous “How bout them Cowboys?”:

“Every team kind of has their saying, and that stuck. And I think it means a lot. I know I want to be in the locker room and say it the same way he said it, and then it’ll mean a whole lot more to me. ” pic.twitter.com/0TSMMpGUcA

This decade was not only golden for the rivalry between Cowboys and 49ers, but also for the successes of each team. In those years, both Dallas (3) and San Francisco (1) expanded their track record to five Super Bowl victories. Since then, neither team has won the Lombardi trophy.

Since the National Conference finale of the 1994 season, the Cowboys-49ers rivalry has lost some luster. Their duels have only been limited to regular season duels, this because both teams had not met in the playoffs since then. Since that season they have met 13 times, with a record of 8-5 in favor of the Cowboys, which has tipped the lifetime series in favor of Dallas.

Also, it is worth mentioning that San Francisco has reached the Super Bowl twice in the last decade: in the 2012 (against the Ravens) and 2019 (against the Chiefs) campaigns. However, the Californians lost both games, adding a title drought a year longer than Dallas.

The last game between the two teams occurred recently, in the 2020 regular season. Apart from the limited capacity at AT&T Stadium due to the pandemic, the duel was marked by a time change that drew attention. The week 15 game, scheduled for prime time (Sunday Night Football), was moved into the early afternoon. This was because both teams were nearly eliminated from the playoffs, and their rosters were dwindling due to numerous key player injuries.

However, this duel between Cowboys and 49ers was still exciting and close. The game ended with a 41-33 cowboy victory, a result that kept Dallas alive in the fight to reach the postseason. Running back Tony Pollard had a great performance that day, recording 12 carries for 69 yards and two touchdowns.

Behold the best RB on the Cowboys ⭐️ pic.twitter.com/cLhbBUGTH8

Now, this Sunday’s wild card round duel presents a different picture than in 2020, with both teams having almost all their key pieces. After an uneven start to the season, San Francisco entered the postseason supported by their rushing attack. Meanwhile, the Cowboys are theoretically a serious threat both on offense and defense. However, his erratic performance throughout much of the season and his record in his last steps through the playoffs raise some doubts.

Either way, this Sunday’s game between the Cowboys and 49ers promises to be quite exciting. Although the opponent is quite tough, it is hoped that the cowboy team can live up to the expectations around them and advance to the next round. There they would wait for him Tampa Bay, or else, the winner of the Rams – Cardinals. However, Dallas must focus on beating San Francisco, and this will not be easy.

Cowboys vs. 49ers, a historic rivalry that will revive in these playoffs