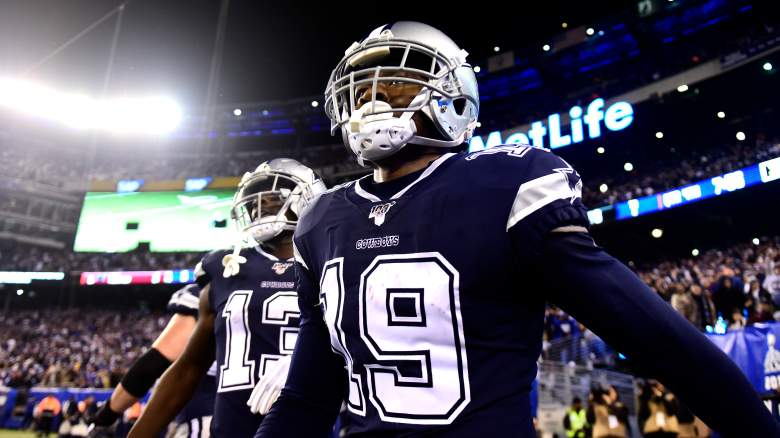 Getty Amari Cooper celebrates after scoring a touchdown for the Dallas Cowboys.

One of the Dallas Cowboys’ standout players had made it abundantly clear that the team’s offense was better with wide receiver Amari Cooper.

The Cowboys chose to trade Cooper this offseason after he spent 54 games and nearly 4 years in Dallas. The four-time Pro Bowler left for the Cleveland Browns with a 2022 fifth-round pick in exchange for the Browns’ fifth-round pick and a sixth-round pick.

While the Cowboys have signed wide receiver James Washington and committed to a future with Michael Gallup and CeeDee Lamb leading the receivers, there still appears to be a gap. Even Dallas tight end Dalton Schultz thinks so, which he stated during the April 18 media availability.

“Obviously we’re a better offense with him,” Schultz said, according to The Athletic reporter Jon Machota. “Unfortunately, we don’t have it, so I think the next step is for the guys to step up. There is room to grow in many other aspects of the game.”

Schultz is one of the players who can take on even more production in 2022, but Cooper’s presence and production as an outside receiver is something Lamb, Gallup or a new addition will need to replicate.

ALL the latest Dallas Cowboys news straight to your inbox! Join the Heavy on Cowboys newsletter here!

The good news for Dallas’ remaining group of pass receivers is that quarterback Dak Prescott has been healthy and available for work. Going into 2021, Prescott was still recovering from his ankle injury in the 2020 season, which meant he had to focus on rehab for much of the offseason.

Schultz revealed that there has been a noticeable difference so far, and that he and other receivers have been working hard with Prescott, according to ESPN reporter Todd Archer.

“Dalton Schultz said players have had ‘ample opportunity’ to be on the field with Dak Prescott this offseason,” Archer tweeted on April 18. “He believes he’s only missed one throwing session with the quarterback so far. “We’re definitely ahead of where we were last year,” he said, referring to Prescott’s ankle rehab in 2021.″

What should be exciting about that is that Prescott threw for 4,449 passing yards in 2021, the second-highest season total of his NFL career. His 37 touchdowns in 2021 is the most he has thrown in a single season, according to Pro Football Reference.

Likewise, it should bode well for Schultz. After a breakout season in 2020, the tight end followed up in 2021 with 808 receiving yards and eight touchdowns, both career highs.

Schultz wants to stay in Dallas

Another notable comment Schultz made during his conversations with the media was about his future. The 25-year-old is currently playing on the franchise tag after he ran out of his rookie contract.

Schultz is receiving $10.93 million for 2022 according to Spotrac, but the tight end expressed interest in a deal that would make him a cowboy for years to come.

“I think it’s a good start,” Schultz said, according to Machota. “Obviously this is where I want to be. I love being here. I love this organization. I want to reach a long-term agreement and I think they do too. I hope we can make it.”

A long-term deal would make sense, but the franchise tag allows the Cowboys to see how Schultz fares in 2022 before making a decision.