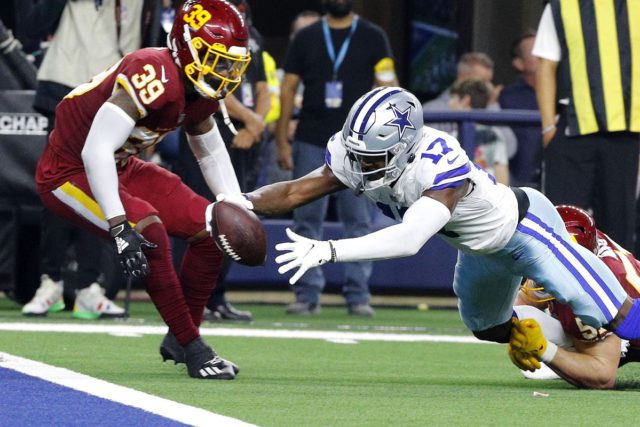 In the 2021 season, the Cowboys had numerous elements at wide receiver. However, the situation is different this year. Last month, the team traded Amari Cooper to the Browns and Cedrick Wilson Jr. left as a free agent for the Dolphins. Now, Dallas has lost another member of its receiving corps, in this case a depth piece.

Malik Turner reportedly signed a one-year contract with the San Francisco 49ers on Monday. The 26-year-old receiver has been sought after by several teams in recent days, but finally it was the Californian team that took over his services. Turner will have a base salary of $300,000, plus other guarantees.

Former Cowboys WR Malik Turner signed a one-year contract with the 49ers, source said. Deal includes some guarantees, including $300K of his base salary. Turner took advantage of opportunities in Dallas, but Cowboys seemed to try to move in a different direction.

Coming into the NFL in 2018 as an undrafted rookie, Turner has mostly been a depth piece and special teams item. That was his role with the Seattle Seahawks, where he played his first two years as a pro. Then, after a brief month-long stint in Green Bay, Turner would arrive in Dallas in September 2020 to add depth to special teams.

That year, Turner would only play in the first four weeks of the season, as he was declared inactive for the following games. However, the Illinois product was re-signed by the Cowboys for the following season, this to remain a depth piece on the roster.

It is worth mentioning that Malik Turner had his best offensive production in 2021 since his second year in Seattle. In 14 games, the receiver had 12 receptions for 149 yards and three touchdowns. His scoring, however, was in game-play situations: two touchdowns in a loss to Denver in Week 9, and the third in a blowout win against Washington in Week 16.

Dak Prescott connects with Malik Turner to break the zero. The conversion of the 2 points is good 🤠
Dallas is saved from the shutout 😮‍💨#BroncosCountry 30#DallasCowboys 8

Although he has always played a depth role since his arrival in the NFL, Turner has shown glimpses of being able to make big plays after the catch. This was demonstrated in the aforementioned game against Washington last season. In fact, Turner received praise from head coach Mike McCarthy after that performance.

“I love Malik Turner”McCarthy said last December. “I love his story, what he has overcome. She has battled injuries. He has been back and forth on the practice squad. All he does is take advantage of his opportunities. He’s been a stud on special teams for us, and he’s been productive every time he gets a chance on offense.”

Either way, it sounds like the Cowboys weren’t planning on retaining Turner. The receiver became a free agent last March, and has had some visits with other teams in recent days. Now that his departure is finally finalized, Dallas is left without a depth piece on its roster.

“I haven’t seen anybody make that many cutbacks since Marcus Allen in the Super Bowl. That was an incredible play and then he comes right back and makes another one.”pic.twitter.com/0eVsZIdg1M

With Turner leaving for San Francisco, the Cowboys have lost three receivers so far this offseason. This, let’s remember, after the departures of Amari Cooper and Cedrick Wilson Jr. In this way, the Dallas receiving corps for this year would be made up of CeeDee Lamb, Michael Gallup, James Washington, Noah Brown and Simi Fehoko.

It remains to be seen how the Cowboys’ conservative approach of not making big moves in free agency and focusing on the Draft plays out for the Cowboys. It’s true that the team has been successful in recent years because of the keen eye of Will McClay, vice president of player personnel. However, this is still a risky bet. And if Dallas wants to get back to a Super Bowl anytime soon, it needs to shift its focus and invest in veterans of proven quality.