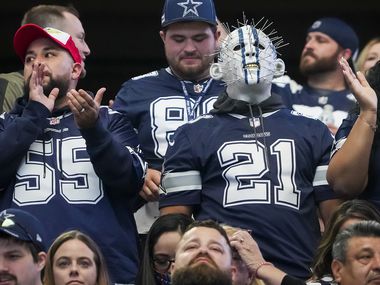 Amari Cooper, Michael Gallup and CeeDee Lamb entered the season with expectations of being selected to the All-Star Game (Pro Bowl) all three reached 1,000 yards.

At the conclusion of the season for the Dallas Cowboys on Saturday night in Philadelphia, the “Big Three” can be described as a major failure.

The low productivity of all three receivers is part of the reason the Cowboys’ offense has endured difficulties in recent weeks.

The trio will not finish the regular season on the field together, and only Lamb has more than 1,000 receiving yards and none were named to the Pro Bowl.

The Big Three will have been on the field together for just seven of the 17 games scheduled for 2021, a fairly low number considering the expectations that surrounded them.

Gallup suffered a season-ending ACL tear in his left knee during a loss to Arizona last week.

He has already missed seven games with a calf injury suffered in the season opener.

Gallup enters the offseason with an uncertain future.

He’s an unrestricted free agent who was hoping to land a great deal.

It was doubtful the Cowboys could keep him given they already have the talented Lamb and the huge contract Cooper has.

Speaking of Cooper, he missed two games with a positive COVID-19 test and since his return the results have been disappointing.

Before being placed on the covid-19 list, Cooper averaged 64 yards per game.

In the five games he has played since his return, Cooper has averaged 40 yards per game with a catch percentage of 59.

Cooper battled a bothersome hamstring injury prior to a positive COVID-19 test, so the two-week absence allowed that leg to heal.

His lack of great production could be attributed to quarterback Dak Prescott and offensive coordinator Kellen Moore not making it work.

Cooper, normally reserved, said before a Week 16 game against Washington that he wanted the ball more often to help the struggling offense.

Last week, Cooper had just three receptions for 18 yards and a touchdown in a loss to the Arizona Cardinals.

Lamb, meanwhile, is one of the more consistent receivers.

He missed a game with a concussion, but he has 1,057 receiving yards with six touchdowns.

Lamb hasn’t caught a touchdown pass since November and his last 100-yard game came in October.

The reasons for the Big Three’s struggles can be attributed in part to Prescott throwing more passes to tight end Dalton Schultz and coverages from opposing teams.

With the Cowboys advancing to the playoffs, the performance of the team’s receivers should improve /

“We are ready to take on the challenge, I feel like this is our opportunity to step up,” said Lamb.