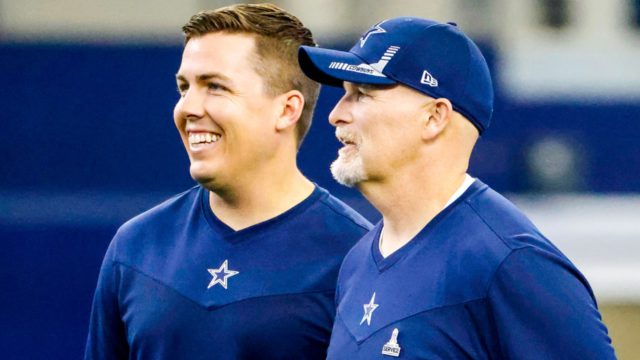 This year’s free agency in the NFL has been called by several analysts one of the craziest in recent times. From million-dollar extensions to unexpected swaps, this agency has had it all. And with the 2022 Draft just around the corner, analysis of each team’s performance during the free agent market is beginning to emerge. Unsurprisingly, the Dallas Cowboys don’t fare well in that department.

In a recent article for Bleacher Report, reporter Ian Wharton rated the performance of all 32 teams during free agency 2022 so far. There, he proceeded to give grades ranging from A+ to F. According to Wharton, the teams that have had a better offseason have been Cincinnati, Tampa Bay, Miami, Denver and Las Vegas, all of which are A-rated. Buffalo and Cleveland rated A-.

Now, Wharton’s rating for the Cowboys is a D. Considering the moves the Cowboys have made thus far, that grade is more than deserved.

“Instead of taking advantage of a strong roster that needed upgrades to compete again in 2022, the Dallas Cowboys took a significant step backwards.”Wharton said. “The only thing that went right for the Cowboys was keeping coordinators Dan Quinn and Kellen Moore, even though they were interviewed for head coaching jobs. On the other hand, the Cowboys did a lot of damage to what was a good roster.”

Ian Wharton calls the decision to part with wide receiver Amari Cooper for salary reasons understandable. However, the departures of Cedrick Wilson, La’el Collins and Randy Gregory are heavy blows due to their value to the team. Aside from that, Wharton points out that the additions made so far don’t make up for what Dallas lost with the aforementioned exits.

It is worth mentioning that, according to the aforementioned article in Bleacher Report, there are teams with worse performance than Dallas in free agency. The New England Patriots got a D-, while the Chicago Bears got an F. Meanwhile, the Cardinals and Rams got a D as did the Cowboys.

However, if you compare Dallas’ performance against its divisional rivals in the NFC East, the situation looks worse. Wharton gave the Washington Commanders a C+, calling the addition of quarterback Carson Wentz a wise move. Meanwhile, the Philadelphia Eagles and the New York Giants received a C as grade.

Now, Bleacher Report hasn’t been the only prominent outlet to rate the Cowboys’ performance in free agency as negative. For the Pro Football Focus (PFF) portalDallas has been below average this offseason.

Specifically, PFF analyst Sam Monson notes that the Cowboys have had more damage than improvement to their roster during this year’s free agency. And while he points out that the front office still has work to do, Monson finds it hard to say that Dallas has a better team now than when the new league year began.

There’s no question the Cowboys have had a far from ideal offseason. It is true that the leadership had as its main goal to improve their situation under the salary cap. To that we also add the extensions of the large number of their players who became free agents last month.

However, some of the departures in the cowboy team ended up weakening the roster, also creating new needs for positions to reinforce. To top it off, the Cowboys maintained their stance this year not to make any major additions in free agency. In fact, Dallas is putting all its chips in the reinforcements that they can add in the 2022 Draft. And that is a risky bet.

For now, the Cowboys may take another look at the free-agent market after the Draft. But if they do, it will be looking for low-cost veterans as in previous years. And while they got it right in 2021 with Jayron Kearse and Malik Hooker, that’s a gamble that hasn’t always paid off for Dallas.