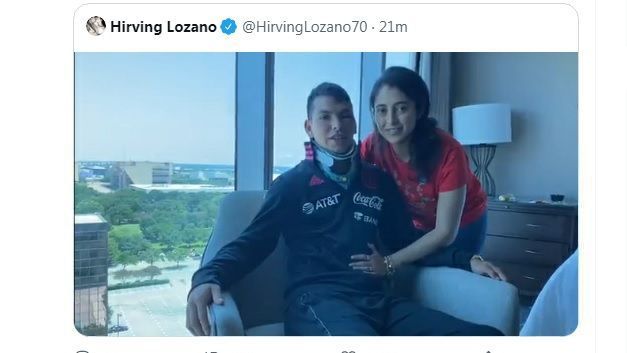 Chucky Lozano published a video where he reappears after the blow he received in the debut of the Mexican National Team in the Gold Cup. He thanked the good wishes and concern for his health

Hirving ‘Chucky’ Lozano, attacker of the Mexican team, uploaded a video on social networks in which he is seen wearing a collar, his left eye almost closed by the blow and helped by his wife, thanking the support and warning that “everything went very well” after the spectacular shock he suffered last night at the game of the gold Cup against Trinidad and Tobago.

“Thank you for the support, the prayers, thank God everything went very well, we are going to really want to,” he said. ‘Chucky’ Lozano, front of the Mexican team.

The Tricolor attacker was injured in the match against Trinidad and Tobago, after a spectacular collision with the rival goalkeeper, which caused him to come out with a bloody face and was admitted to an emergency hospital in the United States. The forward was hospitalized all night, underwent plastic surgery and was released in the morning.

Chucky lozano He underwent several examinations and it was determined that he will be on leave for four to six weeks, so he will not be able to continue in the gold Cup.

For now, he continues in the United States, awaiting the results of more tests, to rule out any other serious injury and may travel to Italy, to do his rehabilitation with Napoli.

In the video, the Chucky lozano with a neck brace and helped by his wife, to maintain a firm position, after the crash last night. His place in the Tricolor will remain vacant, because the Concacaf regulations do not allow him to Mexico summon another footballer in his place.

For now, the forward will continue to be observed by the doctors of the Mexican team and is monitored from Italy by the doctor of Napoli. If it evolves favorably, it will leave the Tricolor concentration in the coming days.