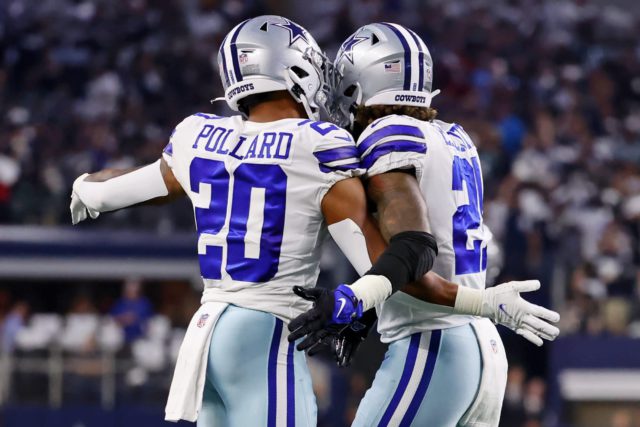 After Tony Pollard’s great performance in Week 8 against the Bears, the Cowboys’ tandem of running backs has been a topic of conversation in recent days. Predictably, the debate between Pollard and Ezekiel Elliott over the starting job has heated up. However, Dallas’ management and coaching staff insist the two players will continue to form an attacking duo once Elliott recovers from his knee injury.

This seems to be the team’s clear focus, whether it’s a preference for Elliott in the front office or balancing the running game. And while this will work for the rest of this season, don’t forget that the Cowboys’ front office has a dilemma to resolve next offseason: keep both running backs or cut one of them.

Recall that Tony Pollard is in the final year of his rookie deal with the Cowboys. Therefore, he could accept an extension with Dallas or seek a juicy contract with a team that guarantees him more offensive prominence. Meanwhile, Elliott’s contract has an “exhaust loophole” for March 2023 that the team could use, considering he doesn’t currently have guaranteed money after this season.

This would leave the Cowboys in a situation similar to the one that occurred last March with wide receivers Amari Cooper and Michael Gallup. Cooper had a way out of his contract while Gallup’s rookie deal had expired. However, unable to afford both receivers, the team decided to extend Gallup and trade Cooper.

However, unlike Gallup and Cooper in 2021, Elliott and Pollard’s production has not been disappointing so far. If both keep up their current pace, they can make history by becoming the first Cowboys running back duo to each rush for 1,000 or more yards in a season.

In the NFL, there have been seven pairs of teammates that have each recorded 1,000 rushing yards in the same season. Will #Cowboys Ezekiel Elliott and Tony Pollard be added to that list this season? #CowboysNation pic.twitter.com/YIeUHwf4wR

Besides, there is another important point: the salaries of receivers in the NFL are currently much higher than those of running backs. However, the Cowboys may decide to make sacrifices in the face of the moves they need to make next offseason. And this is something that the team already went through in March of this year.

In March 2023, there are several key players in Dallas who are out of contract: Tony Pollard, Anthony Brown, Donovan Wilson, Terence Steele, among others. In addition, negotiations for the extension of tight end Dalton Schultz would resume around that time. And this without forgetting that receiver CeeDee Lamb would already be eligible to start negotiating a new contract as well.

Seeing this, the Cowboys could have different options depending on how they want to approach the situation.

If the leadership wants to keep just one of them for budget reasons, the clear option would be to keep Tony Pollard. As with Amari Cooper, the team could shed Zeke Elliott thinking his salary could be better spent paying Pollard the extension and adding another running back. All things considered, Pollard’s new contract with Dallas (or any other team) is unlikely to be expensive.

Tony Pollard in his two career starts without Ezekiel Elliott:

♦️ 279 total yards
♦️ 5 TDs
He had THREE today against the #Bears!!!
pic.twitter.com/AuTDrPjSCj

Now, if Dallas chooses to keep both, the team would have to restructure Elliott’s contract. This is something that was already done last March with DeMarcus Lawrence, who was in the team’s exit orbit. Thus, Zeke would follow his contract while minimizing his salary-cap impact.

However, both options have their dilemmas. On the one hand, it would be necessary to see if Pollard wants to continue in Dallas in the shadow of Zeke or if he will seek more prominence in another team. Meanwhile, Elliott is also likely unwilling to restructure his contract. This, of course, knowing that the money Dallas pays him will not be obtained in another team considering his current level.

As we can see, the debate between Tony Pollard and Ezekiel Elliott will continue at least until March of next year. Together, both offer a good performance, but the little participation of Pollard despite being more explosive than Elliott will continue to generate criticism. Either way, it remains to be seen if the Cowboys decide to keep this tandem for the next few seasons, and if both players accept the small sacrifices they would have to make for it.

Can the Cowboys keep Elliott and Pollard together in 2023?