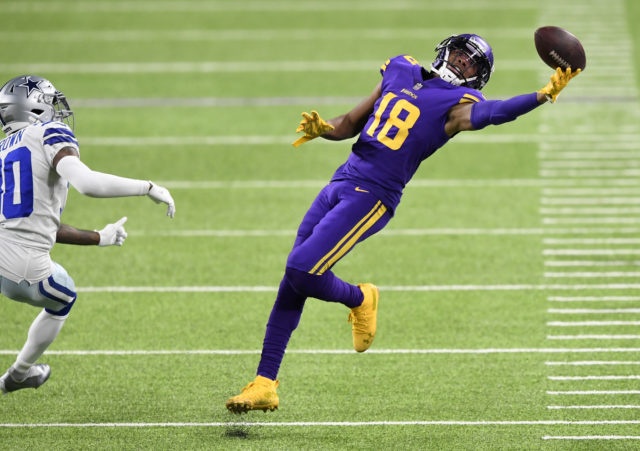 This Sunday’s game against the Vikings will be more challenging for the Cowboys than expected. Despite having one of the best records in the league, Minnesota confirmed against Buffalo last Sunday that it is a fearsome opponent. Likewise, said game confirmed that Dallas will not only have to try to contain the Viking ground attack, but also its star receiver: Justin Jefferson.

Against the Bills, Jefferson put together one of his best performances since coming to the NFL. On that day, the 2020 first-round pick had 10 receptions for 193 yards and a touchdown. Besides, he made several memorable catches that were key to the comeback and subsequent victory of the Vikings in overtime.

But that is not all. Through nine games, Jefferson has 1,060 receiving yards this season. This ranks second in the NFL in that category, just behind Tyreek Hill (Dolphins, 1,148 yards in 10 games). There are even those who project that Jefferson can surpass his personal best record (1,616 yards in 2021) and even try to break the all-time record held by Calvin “Megatron” Johnson (1,964 yards in 2012).

Looking at this, there’s no doubt that the LSU product will be a tough threat, especially after his display against one of the best defenses in the NFL right now. However, in Dallas they are aware of the caliber of this receiver. This is how Jayron Kearse, safety of the Cowboys, revealed it in recent statements to the media.

“He is the best receiver in the league”Kearse said of Jefferson on Wednesday. “The recordings do not lie. You can say what you want, but you put the videos and you will see it. He is open to everyone. He plays well against any opponent. Every top cornerback you put in front of him, (Justin) is going to come out and make plays for him. The recordings don’t lie.”

Cowboys safety Jayron Kearse says Vikings’ Justin Jefferson is the NFL’s best WR: “The tape doesn’t lie. You can say whatever you want to say, you turn the tape on, you see it. He gets open against everybody. He plays good against every opponent.”

Despite Kearse’s words, a Cowboys corner could be key in trying to neutralize Jefferson. And that would be Trevon Diggs.

It is worth mentioning that this would be the second time that Diggs and Jefferson have met in the NFL. The two have known each other since the duels between LSU and Alabama when they were both in college football. This “foreknowledge” has been key to Diggs knowing how to deal with the talented receiver.

Admittedly, Justin Jefferson made some impact in his first game against the Cowboys in 2020, notching 3 receptions for 86 yards. However, Diggs didn’t cross paths with him on that occasion as he was on injured reserve. Then, in 2021, the Dallas cornerback managed to minimize the receiver to just two catches for 21 yards. Therefore, Diggs may be essential to contain Jefferson.

However, these are not the same Vikings from last year. Now under Kevin O’Connell as head coach, this team is one of the biggest surprises this year, boasting an 8-1 record after nine games. Now, Minnesota wants to continue proving that this record has not been the product of luck and that they are strong candidates in the fight for the National Conference title.

Jefferson in doubt for Sunday

Despite the expectations, Justin Jefferson’s status heading into Sunday could be in question. This Wednesday, the receiver appeared on the Vikings injury report with a toe injury. Because of this, Jefferson has worked on a limited basis in the first two practices leading up to the game against the Cowboys.

At the moment it is expected that Jefferson can play this weekend. The LSU product won’t be the only concern for the Cowboys’ defense, however. Let’s not forget that running backs Dalvin Cook and Alexander Mattison are serious running threats. Meanwhile, receivers Adam Thielen, KJ Osborn and Jalen Raegor can also put the cowboy team in trouble.

Of course, in Dallas they know this situation very well.

“They have a lot of good players in key positions”Jayron Kearse said of the Vikings. “They do a great job of getting them fully open.”

Without a doubt, containing the Vikings’ offense will be a big challenge for the Cowboys’ defense. If the Dan Quinn-led group pulls it off, this will be a confidence boost after being exposed against the Packers in Week 10. Either way, the missions of the cowboy defense against Minnesota are clear: slow down the running game, pressure the quarterback Kirk Cousins ​​and, of course, trying to contain Justin Jefferson.