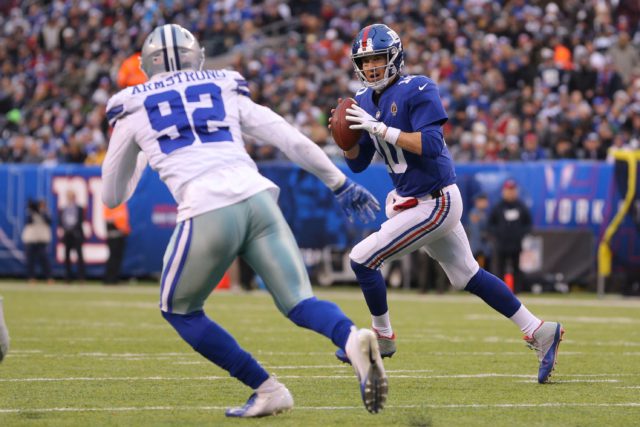 There is no doubt that the controversial departure of Randy Gregory left a significant gap in the Cowboys’ defense for the 2022 season. And although the leadership took action on the matter by reinforcing the position, there are doubts about who the player could be. to step forward and become DeMarcus Lawrence’s regular companion. However, there are those who review that Dorance Armstrong could be that player.

One of those with high hopes for this is Maurice Moton, a journalist for Bleacher Report. Recently, Moton published a list of the “best kept secrets” of each team for the upcoming campaign. For each team, he chose a player who is out of the limelight and who could emerge as a surprise this year. And, in the Cowboys’ case, that player could be Armstrong.

It is true that Armstrong is coming off his best season as a professional in the NFL. In 2021, the defensive end recorded 37 combined tackles, 12 quarterback hits, five sacks, three tackles for loss of yards, one pass defensed, one fumble recovery and one touchdown. All this in 13 games, five of them as a starter.

Now, let’s recall the factors that affected Dorance Armstrong’s performance last year. For one thing, this defensive end had more opportunities due to the absences of DeMarcus Lawrence and Randy Gregory during certain stretches of the season. And on the other hand, having Dan Quinn as defensive coordinator certainly benefited him.

Of course, the picture will be different in 2022. After Randy Gregory left for Denver, the Cowboys moved immediately to strengthen the position. This led to a new two-year contract for Armstrong, the addition of Dante Fowler and the selection of Sam Williams in round 2 of the 2022 Draft. Besides, we must not forget Chauncey Golston, a round 3 pick in 2021 and who also would join the competition.

These four players will be fighting to be the one to accompany DeMarcus Lawrence as the starter in the cowboy defense. They may even all have a rotational role to keep the pressure on opposing quarterbacks “fresh.” However, Armstrong may start out ahead of his competition.

So says Jess Haynie, writer of Inside The Star. In a recent article, Haynie lists five players in Dallas who could emerge this season, including Dorance Armstrong. In his case, the defensive end would have the advantages of his seniority in the organization and his great campaign under the command of Dan Quinn as defensive coordinator.

Dorance Armstrong : 3 tackles, a sack, 3 QB hits & a blocked punt recovered by Nahshon Wright in the endzone for a touchdown pic.twitter.com/HEL1TsRZbv

Let’s also remember that Armstrong wasn’t the only experienced player to shine in Dallas in his first year under Dan Quinn. Something similar happened with safety Jayron Kearse, who went from playing a supporting role on his previous teams to becoming a mainstay on the Cowboy defense in 2021.

That said, it’s possible that Armstrong will maintain an upline in his second year by following Quinn’s orders. Of course, there is skepticism about it. After Gregory’s departure, not many analysts and reporters see Armstrong as someone who can match what the now Broncos player offered. But neither should we rule out the possible effect that Quinn may have on his direct.

For now, we’ll have to wait until camp and preseason to see how the competition for the vacant defensive end role shapes up. It will be then that we will see if it will be Dorance Armstrong who will step forward, or if a rotation will be maintained in said position. Either way, Armstrong has a clear opportunity to prove himself, and it’s up to him to take advantage of it.

Can Dorance Armstrong shine on the Dallas defense in 2022?