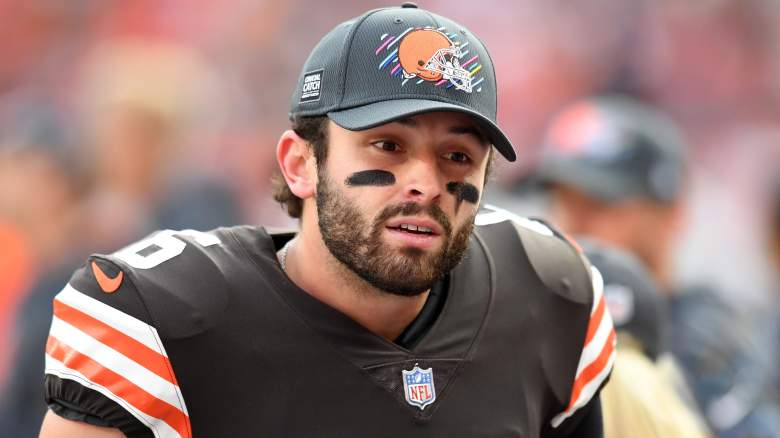 Getty Baker Mayfield #6 of the Cleveland Browns talks to teammates on the sidelines during the second quarter against the Arizona Cardinals at FirstEnergy Stadium on October 17, 2021 in Cleveland, Ohio. (Photo by Nick Cammett/Getty Images)

The Cleveland Browns are running out of time to claim their desired return in a trade centered on quarterback Baker Mayfield.

Draft week has been a window of time for the Browns to move Mayfield in hopes of regaining a meaningful pick, according to NFL Network’s Ian Rapoport. However, it appears that if Cleveland hopes to acquire another pick by draft night, they will have to accept a smaller pick than the first through third rounds they are rumored to be seeking in exchange for the quarterback.

Bleacher Report’s Gary Davenport suggested Monday that the Browns could work out a deal with the Seattle Seahawks if the team is willing to reclaim a fourth-round pick (No. 109 overall) in exchange.

Right now, Browns fans are rampaging on Twitter to send out missives calling me an idiot for claiming that all the Browns can get for Baker Mayfield right now is a Day 3 pick.

Apparently they haven’t been paying attention. Because as things stand right now, the trade market for the first overall pick in the 2018 NFL draft is non-existent.

However, that could change. There are two QB-needy teams ahead of Seattle in the draft order (Atlanta and Carolina) and two more (Detroit and Houston) that could draft a quarterback. It’s well within the realm of reason that by the time Seattle enters the clock at No. 9, three quarterbacks have been drafted.

I know what the mock drafts say. But I also know that NFL teams lose their minds over quarterbacks.

If the Seahawks fall short of the quarterback prospect they want, taking a one-year flight at Mayfield will become that much more appealing. Especially since the alternative is (shudder) to start with Drew Lock or Geno Smith.

GettyCleveland Browns quarterback Baker Mayfield during warmups before a game against the Houston Texans at FirstEnergy Stadium on September 19, 2021 in Cleveland, Ohio. (Photo by Gregory Shamus/Getty Images)

As Davenport pointed out, the Seahawks have two potential starters on their roster, Lock and Smith, though neither inspires much confidence in the notion of sustained success over the course of a season.

However, the Seahawks’ decision to sign Smith to a one-year contract worth $7 million after what was arguably his best season in 2021, albeit with limited action, appears to make a deal for Mayfield and Seattle less crucial and therefore less likely.

Smith threw for five touchdowns and an interception in three starts for Seattle last year, posting a career-best 103.0 passer rating. Smith has a 13-21 record as a starter throughout his eight-year NFL career with the Seahawks, New York Jets and New York Giants.

If Seattle pulls out of Mayfield’s market, either in favor of Smith or a rookie QB in the draft, other teams will be interested. Among those teams, according to ESPN reporter Jeff Darlington, are the Pittsburgh Steelers.

Darlington appeared on ESPN’s “Get Up” morning show on Wednesday, April 20, and said that while the Steelers are not currently in trade talks for Mayfield, they would jump at the chance to sign him if the Browns release him.

“If for some reason the Browns — and I don’t expect this to happen — cut Baker Mayfield, I think he signs with the Pittsburgh Steelers the next day,” Darlington said. “Teams still covet Baker Mayfield. They just don’t think they should give as much as the Cleveland Browns are asking for right now.”