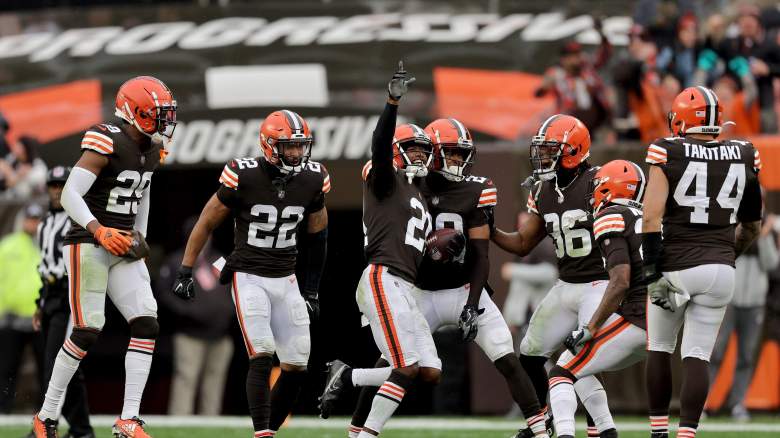 Getty Denzel Ward #21 of the Cleveland Browns celebrates with his teammates after his interception in the third quarter against the Detroit Lions at FirstEnergy Stadium on November 21, 2021 in Cleveland, Ohio. (Photo by Gregory Shamus/Getty Images)

The Cleveland Browns have spent the offseason making waves in the trade market, adding to their roster from outside to keep pace in a stacked AFC. But soon, it will be time to take care of one of your own.

Cornerback Denzel Ward has played four seasons in the NFL, ending his career with Pro Bowl selections in 2018 and 2021. The Browns exercised their fifth-year option on Ward’s rookie deal, meaning they will pay the former pick No. 4 overall just under $13.3 million in 2022. And the numbers are only expected to rise from there.

Bleacher Report’s Alex Kay in an article published Wednesday, April 13, suggested that Ward could go as far as resetting the market at cornerback with the extension he is expected to sign sometime next year.

If the 24-year-old continues to develop along his current path, he should have no problem signing a new contract worth more than $20 million per season.

According to Nate Ulrich of the Akron Beacon Journal, former NFL agent Joel Corry believes Ward’s floor is around the $19.4 million AAV (average annual value) that Ohio State teammate Marshon Lattimore received at the start. of the 2021 campaign.

Although Ward, a two-time Pro Bowler, has missed time each of the past four years due to injury, he’s a major asset when he’s on the field. He has never allowed a completion rate higher than 60.3 percent in a single season and has already racked up 10 interceptions in 52 games.

If Ward can stay healthy and put together another steady campaign in 2022, he’ll almost certainly get it on his next deal.

GettyCleveland Browns cornerback Denzel Ward #21 celebrates with teammates after intercepting a pass during a game against the Cincinnati Bengals at Paul Brown Stadium on December 29, 2019 in Cincinnati, Ohio. (Photo by Andy Lyons/Getty Images)

While Kay suggested Ward might need another strong year to sign a near-historic contract extension in Cleveland, it could happen sooner.

Brad Spielberger of Pro Football Focus predicted in late December 2021 that Ward would sign a five-year deal worth $105 million ($21 million annually) with a total of $72.5 million guaranteed sometime this offseason.

The Browns have already spent a lot of money, agreeing to pay former Houston Texans quarterback Deshaun Watson $230 million over the next five seasons and fully guaranteeing every dollar of that deal. They also traded to the Dallas Cowboys for wide receiver Amari Cooper, who will earn $20 million a season for the next three years.

Ward is eligible to sign an extension now, but any deal he agreed to would not apply to the Browns’ salary cap until 2023. After jockeying creatively with Watson’s contract and Cooper’s restructuring upon his arrival in Cleveland, the Browns have nearly $20 million in room left to spend in 2022. The team is actively seeking a No. 2 wide receiver, potentially a reunion with Jarvis Landry, and has offered defensive end Jadeveon Clowney a two-year deal.

GettyCleveland Browns cornerback Denzel Ward #21 celebrates with Kevin Zeitler #70 after intercepting a pass during the second quarter against the Pittsburgh Steelers at FirstEnergy Stadium on September 9, 2018 in Cleveland, Ohio. (Photo by Jason Miller/Getty Images)

If Ward signs a contract close to $105 million, as Spielberger suggested, that would make him the second-highest-paid cornerback in the NFL based on annual income.

According to Pro Football Network, Miami Dolphins defender Xavien Howard claims the largest CB contract in the league with an AAV of $25.35 million. Los Angeles Rams cornerback Jalen Ramsey is second with an AAV of $20 million. The aforementioned Lattimore of the New Orleans Saints is third with an AAV of $19.52 million.

Spotrac projects Ward’s annual worth at $18.7 million a year, though because of the way NFL contracts tend to scale for players of a similar caliber, Spielberger predicts he’ll do better than that figure.

Lattimore’s extension shortly before the 2021 season was big news for Ward, and not just because the two players were teammates at Ohio State in 2015 and 2016 before Lattimore was drafted 11th overall in the 2017 draft. and Ward was subsequently No. 4 overall in 2018.

Lattimore, like Ward, has had some issues with week-to-week consistency from both a health and performance perspective. However, the two young stars are the rare breed of outside cornerbacks who are true lockdown players, playing roughly 60% of their snaps in press coverage. There are some skills and skill sets that just can’t be taught, and one of them is excelling as a male coverage cornerback on the outside. For this reason, when a team finds such a player, they tend to pay a lot of money at the position.