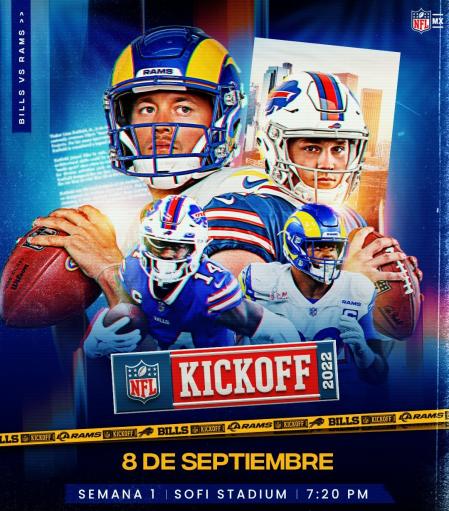 This Thursday’s game between the buffalo bills and the champions Los Angeles Rams and the one on Monday, with the Seattle Seahawks against the Denver Broncos, they steal the spotlight in the opening week of the 2022 NFL season.

The Bills are marked as one of the favorites to reach Super Bowl LVII and will be put to the test from their presentation at SoFi Stadium, home of the NFL Monarchs.

2020 Pro Bowl quarterback Josh Allen is expected to break out with Buffalo and improve on the 4,407 yards he had last year, in which he was eighth-most, and the 36 touchdowns that ranked him seventh in the league. NFL in that line.

On defense the Bills lost their star, cornerback Tre’Davious White, who underwent cruciate ligament surgery and will not see action before week five. Rookies Kaiir Elam and Christian Benford will try to fill White’s void.

The bet couldn’t be riskier because these guys will cover Super Bowl LVI MVP Cooper Kupp, a triple crown winner in 2021 as the receiver with the most yards, receptions and touchdowns.

The Rams’ passing attack will be led by Matthew Stafford, the quarterback with the second most touchdown passes in 2021, he had 41, and the third with the most yards, 4,886, despite carrying an elbow injury all season.

Stafford treated that annoyance in the offseason and didn’t play in the preseason to be ready for the opening game.

On Sunday, rookie Trey Lance will start his first season as a starter for the San Francisco 49ers, against the Chicago Bears, ahead of veteran Jimmy Garoppolo, who will be the backup.

In another game, the Pittsburgh Steelers, with Mitchell Trubisky as the main passer, will face the AFC champions, the Cincinnati Bengals, with quarterback Joe Burrow; a matchup between one of the NFL’s fiercest rivalries dating back to 1970.

Also on Sunday, Tom Brady, a 45-year-old quarterback for the Tampa Bay Buccaneers, will appear in his 23rd season as he seeks to reach an 11th championship game to win the eighth Super Bowl of his career; his first obstacle will be the Dallas Cowboys.

For Monday, the expectation to see passer Russell Wilson at the head of the Denver Broncos offense against his former team, the Seattle Seahawks, holds one of the most anticipated duels of 2022.

With the arrival of Wilson, who signed a five-year, $245 million contract, the Broncos are favorites to compete for the AFC West title.

The 33-year-old quarterback played 10 years in Seattle, a squad with which he won a Super Bowl, and for the first time he will be his opponent.