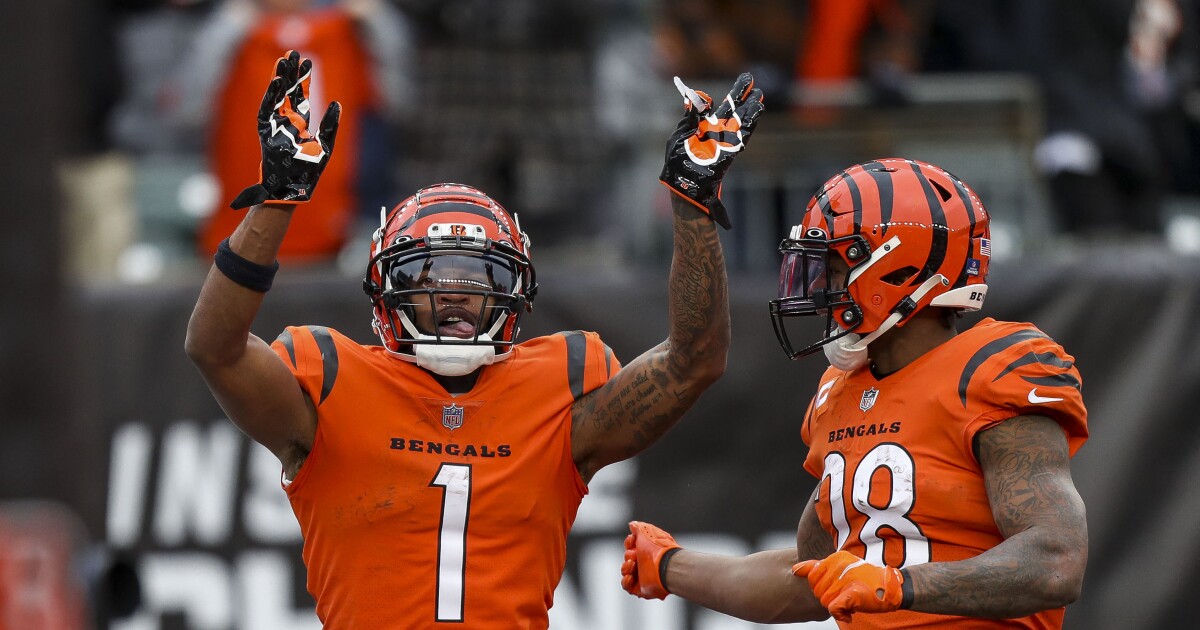 The Kings of the North. The Bengals conquered their division, after defeating the Kansas City Chiefs 34-31, who lost the leadership of the AFC, because with the defeat and the victory of the Titans, Tennessee is the best team in the Conference.

The second-year quarterback, Joe burrow, returned to have an extraordinary performance four TD passes, 30 completions of 39 attempts, for 446 yards through the air; his best ally Ja’Marr Chase, who had 3 touchdowns and 266 yards.

In addition to the ticket added by the Bengals, the Bills, Patriots and Titans also qualified for the 2021 NFL postseason; Buffalo defeated the Falcons 29-15; the Pats they had no mercy and ran over him 50-10 to the Jaguars; while Tennessee is AFC Leader and Division South Champion, after defeating Miami

2Q 2:22 | TOUCHDOWN OF THE CHIEFS | Derrel Williams appears on the ground again, with a one-yard carry | Chiefs 28-14 Bengals

2Q 7:46 | TOUCHDOWN OF THE BENGALS | Joe Burrow’s second TD pass to Ja’Marr Chase, who had a spectacular reception | Chiefs 21-14 Bengals

1Q 2:13 | TOUCHDOWN OF THE BENGALS | Ja’Marr Chase spares after a 72-yard pass from Joe Burrow and Cincinnati appears in the game and on the scoreboard | Chiefs 14-7 Bengals

1Q 9:26 | TOUCHDOWN OF THE CHIEFS | Patrick Mahomes finds Demarcus Robinson on a 29-yard pass to open the scoring | Chiefs 7-0 Bengals

Kick off the game at Paul Brown Stadium !!

Two weeks remain in the NFL regular season. With your sights on the playoffs, the Chiefs and the Bengals face off this afternoon in what looks like an early playoff game. Seeded as number one in their respective divisionals are two postseason guests who will seek to make history.

The franchise of Kansas had a terrifying start in the league, it was even thought that for a moment they might be left out of the fight for the Super bowl, and that the era of Patrick Mahomes and Andy Reid was over.

It may interest you: The 5 disappointments of the 2021 NFL season

They had another to say. With the first of the American Conference, and mark of 11-5 The Chiefs add eight wins in a row and are broad candidates to reach the game for the third year in a row. Vince Lombardi.

Joe Burrow and the Bengals seek the playoffs

One of the most pleasant surprises of the year has been the Bengals. Commanded by Joe burrow, who last year suffered a terrible injury that even questioned his continuity as an NFL player.

It may interest you: The best surprises that the NFL left in 2021

A little over a year after that terrible moment for the player, Burrow has led the team of Cincinnati to the top of the AFC North, with a 9-6 record, and a victory would give them the divisional title, a championship they have not won since 2015.

Bengals beat the Chiefs 31-34 and are AFC North champions