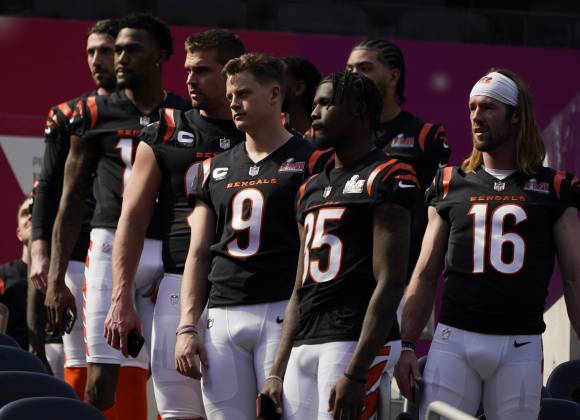 No one expected the Cincinnati Bengals to be in the Super Bowl. After all, in the 2020 season they finished 4-11-1 in last place in the AFC North.

The Bengals were a good team in 2021, but not a great one. The Super Bowl seemed unlikely until Evan McPherson hit a 31-yard field goal to beat the Kansas City Chiefs in overtime, ending the AL Championship game.

Cincinnati was expected to go through another year of rebuilding. Instead, he went deep thanks to the creativity and confidence of quarterback Joe Burrow, the immediate impact of rookie receiver Ja’Marr Chase, the powerful leg of rookie kicker McPherson and a defense that got better as the season went on.

It all ended in the Super Bowl, with the image of a limping Burrow, after being sacked 7 times and running out of magic on a fourth down and a yard to go, again with the pressure of the Rams’ defense on top.

A few more seconds in the pocket would have allowed Burrow to see an unmarked Chase deep in the field, but in his desperation, the quarterback tried to evade Aaron Donald and threw a desperate pass that fell short.

“I’m probably one of a lot of people on our staff and on the team that thinks ‘man, if I had done something different, maybe we would have won,’” coach Zac Taylor said. “That’s the part that we have to deal with and be able to get past at some point. And that also feeds you. I already had a day off now, and what you want is to go back to work because I want to go back to the Super Bowl to finish what we started.

The Bengals announced that the 38-year-old coach, who went 6-25-1 over the first two seasons in his first stint as head coach, has been given a five-year contract extension.

“There is a lot of trust in the building. We have the right people,” Taylor said.

The addition of Chase was the piece that gave the Bengals one of the best receiving groups in the NFL. The 21-year-old first-round pick dropped a few passes in the preseason but became the Offensive Rookie of the Year with 1,455 receiving yards in the regular season, the most by a rookie in the Super era. Bowl and a record in team history.

Tee Higgins, in his second year, and veteran Tyler Boyd, complemented the offense with 3,400 yards and 24 touchdowns.

THE LINE IS A WEAKNESS

The offensive line still needs a lot of work. Burrow was grounded all season. He was the most sacked quarterback in the NFL. Against better defensive lines, like the one led by Aaron Donald with the Rams, Burrow was under constant pressure.

Including the postseason, he was sacked 70 times — the third-most in NFL history.

Bengals are exciting, but they need work