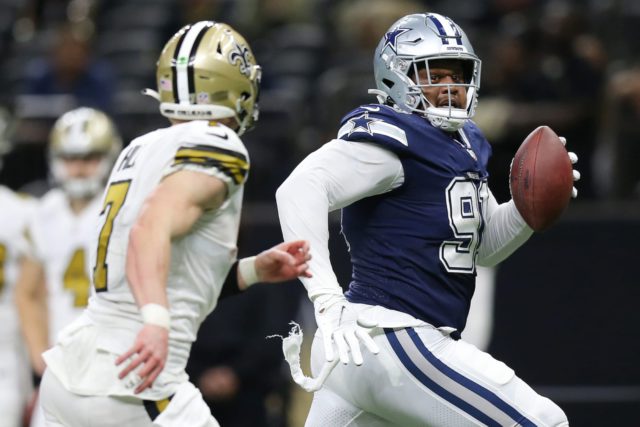 Discussions about the urgency of correcting the flaws inside the defensive line were finally addressed by management. While they didn’t work out at all, last season they had invested in veterans like Gerald McCoy and Dontari Poe. In this case they mixed free agents with rookies in a very successful way.

Logically, the rating must be linked to expectations. Nothing on paper indicated that the Cowboys were suddenly going to have an Aaron Donald generating constant pressure on the quarterback from center. What was necessary was greater solidity to stop especially the ground attacks that did so much damage in 2020.

For that reason, the positional group of the tackles is more than approved. Taking into account the little money allocated to that sector, the production was acceptable. A very relevant issue is that the performance between them was quite even. There was no one who was a real weakness for opponents to easily exploit.

The most outstanding perhaps was Carlos Watkins for his consistency. His 28 years of age puts him at the sweet spot between experience and physical condition that is still good. Dallas signed him in free agency for one season for $1.75 million, so his performance outweighed his low cost.

Outstanding defensive tackle action was undoubtedly his. In a somewhat bizarre game against the Saints, Watkins intercepted a pass from Taysom Hill and returned it 29 yards for a score. Although he had only one sack, his five TFLs were fourth-best on the team. One drawback is that he ends his contract in March.

A very pleasant surprise was the start of Osa Odighizuwa. The rookie third-round draft pick quickly established himself as an important piece of the rotation. His two sacks are a low number, but he complemented it very well. He finished third with six tackles-for-losses and fourth with eleven QB hits. The problem he had was a noticeable drop in his influence during the second half of the season. His first year in the NFL was promising.

And lining up all over the place! Last night alone:

One person who didn’t contribute as was believed was Neville Gallimore. The 82nd overall pick in 2020 could not provide his potential due to an injury in the preseason. Gallimore only started competing in week 14, so his roster was pretty empty. Something similar happened with the veteran Brent Urban after being left out for the rest of the competition in week 6. That path was also traveled by Trysten Hill for the second consecutive season.

A position in which some physical development is needed could be improved by a natural situation in the future. The Gallimore-Odighizuwa duo has the potential to take a step forward. Rookie Quinton Bohanna is hardly a block-absorbing tackle, but he has a definite role. A versatile presence like rookie defensive end Chauncey Golston is another element to consider.

Not as urgent as it was until recently. The draft could present opportunities if there is some availability. However, it seems that it is best to bet on cheap veterans who complete the rotation with experience. That type of negotiations is what the franchise usually does in free agency.

The players who arrived at the team as free agents in 2021 are the ones who will end their ties. Both Watkins and Urban will become unrestricted free agents, so there will be a space there that must be covered. The rest of the options will continue on the roster next season.