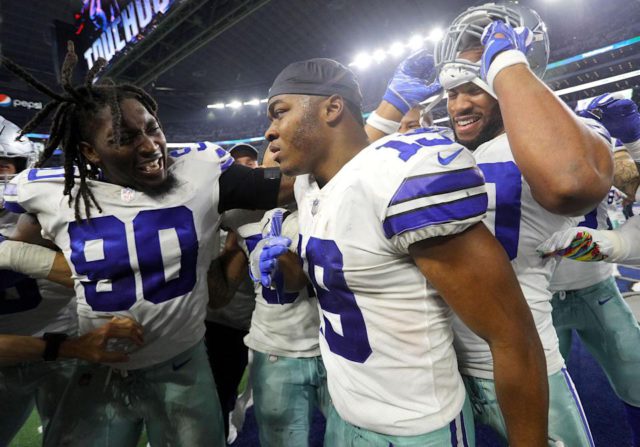 The way the season ended will likely downgrade almost everyone on the roster. However, the defensive improvement was too obvious to forget all the progress because of a bad game. An essential issue for that 180° turn was the pressure on the quarterback. It’s true that the biggest contribution came through Micah Parsons, but the rest had a pretty good job.

Logically, DeMarcus Lawrence’s statistical output was again low. Especially considering his huge contract of 105 million. Although that had to do this time with an injury suffered in training after week 1. That limited his participation to just eight appearances including the playoffs.

Lawrence was shown as a piece that can still be important for Dan Quinn. While his salary indicates the sack minimum should be at least in the double digits, he feels like that performance is way behind. Even so, he was a key player in the decisive sector that is the line of scrimmage.

.@TankLawrence is down the field & to the end zone!

Finishing with three sacks was his lowest mark in the last five years. In that direction, the management will have to consider several discussions thinking about the future, although when he was on the field he contributed his own. The best action was undoubtedly the fantastic pick six from 40 yards that he achieved against the now called Washington Commanders.

The defensive end that stood out the most was Randy Gregory. His performance against the 49ers generates many questions due to the lack of concentration or discipline by committing three infractions. Two of them very silly being neutral zone invasions and a very expensive penalty in the final two minutes that ate up the clock. However, he was the most dangerous in that position.

Gregory picked up where he left off in the season of his return to the NFL. Due to various inconveniences he competed in 13 games, but that was enough for him to be second on the team in sacks with six. One thing that speaks to the inconsistencies that plagued his career is that he put up his best number in that category.

His situation will be perhaps the most relevant in the coming months because the defensive end is on the endless list of unrestricted free agents. The Cowboys will have to decide if they can trust Gregory long-term before giving him a long-term deal. In case they do not offer enough, they must make an investment to occupy that place.

Rotation is another area where good performances were seen. Dorance Armstrong finished with five sacks in 13 games before becoming UFA. Rookie Chauncey Golston came through as expected by being a presence that solidifies the line despite not being as effective in pressing. Tarell Basham fulfilled his role by getting 3.5 tackles from the quarterback. His eleven QB hits were a pretty decent number.

A possible urgency will depend on how the negotiations with Gregory develop. If they do not come to fruition then the answer is a resounding yes. Quarterback pressure is an essential factor for any defense, so it cannot be taken lightly. In free agency, Dallas doesn’t usually spend as much money to sign outside players, preferring instead to use it to retain their own. The good news is that the upcoming draft class has some very good options available.

Who stays and who goes?

The ones ending their ties to the franchise are Gregory and Armstrong at defensive ends. The positional group among those under contract for 2022 for now boils down to Lawrence, Golston and Basham. For this reason, it will be a sector in which management will have to move quickly so as not to create a hole.