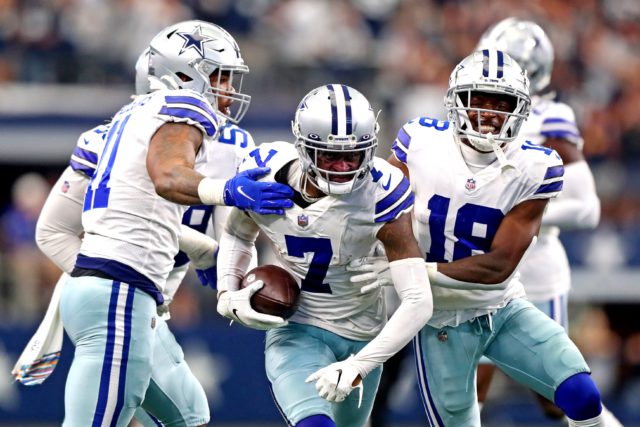 The area in question was another emergency before the start of last season. For that reason, the possibility of selecting a cornerback with the tenth overall selection was considered. That would be great news for the Cowboys ultimately because it allowed for Micah Parsons. However, it was still an obvious need.

Management went in that direction with its second-round pick. As no such polished product was available, they opted for Kelvin Joseph. The verdict on that decision cannot yet be made after only a year, although it was noted in the preseason that the rookie still needs to improve many things to contribute to the first team.

That situation raised some questions that were amplified after Week 1. That opening night Thursday saw Anthony Brown get burned easily. Omens about a possible disastrous weakness in that area were then magnified. However, as the games went by, that sector of the roster was solidifying.

Although the big news was undoubtedly the explosion of Trevon Diggs. The Alabama graduate had shown conditions in his rookie season. His background as a wide receiver was something that was very tempting for management to draft him in 2020. Play-making ability is something the franchise’s cornerbacks have lacked for a long time.

Surely he will not be able to repeat the statistical production he had. Not because of any lack of her own, but she was truly extraordinary. The record is so scant that his 11 interceptions were the most in the NFL since 1981. Asking him to hit those numbers again would be unrealistic, but it would be realistic for him to continue down that path.

Diggs isn’t the best at coverage because of his aggressiveness. Double-moves are a very effective tool against him as he almost always tries to guess where the pass will go. Therein lies the explanation why his PFF Grade is so low. However, the importance of these metrics is relative when taking into account the impact that turnovers generate in a game.

Quite possibly Parsons was the most prominent member of the defense. The reason is the disruption he makes in rival offenses. Because of Diggs’ style, quarterbacks chose to challenge him despite the huge number of picks he got. He used that to his advantage, though, to become a first-team All-Pro in just his second season in the league.

The importance of recovering the ball goes more than one sheet. Those kinds of actions cause a change in momentum that can turn a duel around. An obvious example occurred in the playoffs against the 49ers. The Cowboys weren’t close at any point in the afternoon, but a pass intercepted by Brown gave them life to dream of winning.

The common thing is that defenses have certain ups and downs each year. Its returns are often harder to predict than attack returns, so expectations should be tempered. However, the return of Dan Quinn is an incentive to believe that the level could be maintained. In any case, the corner represents a large part of the identity that the coordinator seeks.

In fact, it’s the most interceptions in a season by ANY player since Walls had 11 in ’81.

No other player in the NFL has more than 7 interceptions this season. pic.twitter.com/vzt2CkOq5l

Dallas finished as the leader in interceptions with 26. Brown finished with three after finding production definitely higher than expected after the loss at Tampa Bay. An acceptable contribution came from Jourdan Lewis with three other picks. Substantial questions will henceforth focus on Joseph. The other unknown will be in the most surprising pick in the draft Nahshon Wright, who contributed on special teams above all.

The constant increase in the use of passing attacks forces franchises to have good groups of cornerbacks. A position to improve perhaps is that of Brown as CB2. His performances were acceptable with a few exceptions, but that doesn’t mean there can’t be a leap in quality at that spot in the lineup. In this case, the draft is the ideal situation to find the ally of both Diggs and Joseph for the future.

In this position, it is most likely that there will not be so many modifications. The only one who will become an unrestricted free agent is Maurice Canady, so there will be no need to despair in the construction of the roster. All other available options remain under contract in 2022.