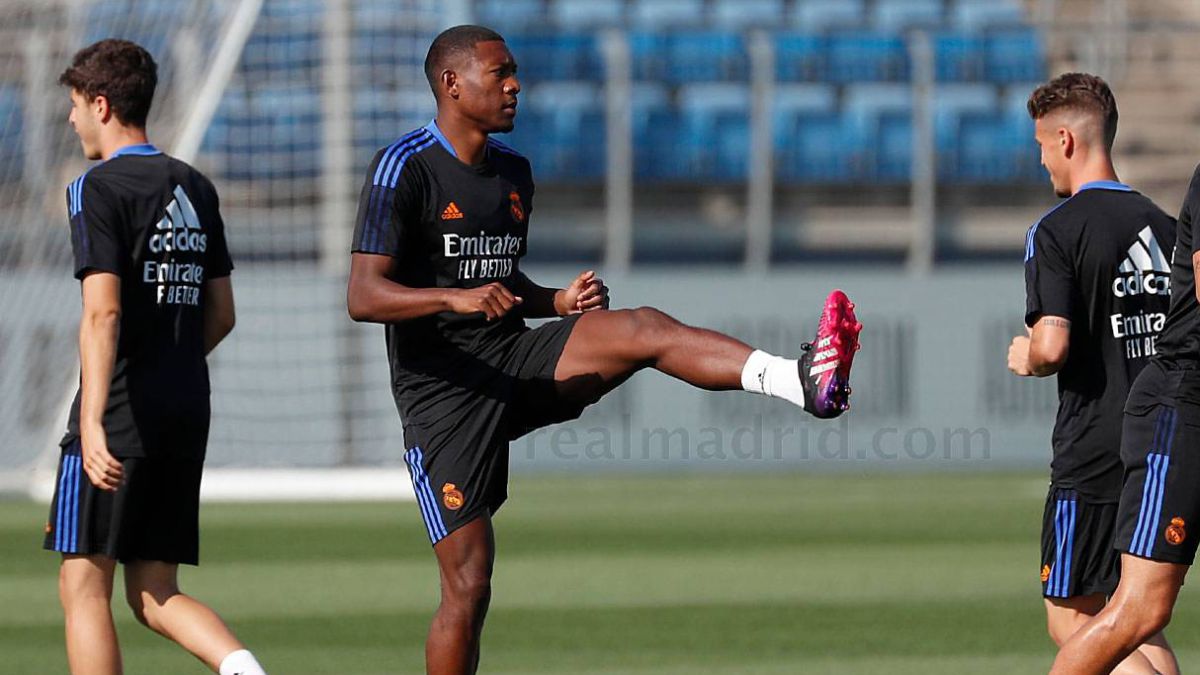 Yesterday, Real Madrid could count on what, for now, is their only new face for the 2021-22 season. David Alaba attended his first training session with the white team after his presentation ceremony with Madrid on Wednesday, a demanding day for the Austrian as a return from his vacation: medical examination, signing of the contract, protocol act accompanied by the president, Florentino Pérez , and a press conference to attend the media for the first time as a Madrid footballer. THe also stopped by the sports city of Valdebebas to greet Carlo Ancelotti and some of his teammates, but it was yesterday, Thursday, when he dressed in Madrid’s training clothes for the first time to complete the only session of the day.

Alaba returned to play 26 days after being eliminated in the round of 16 of the European Championship, precisely on June 26 against Italy at Wembley (2-1); the defender got in the way of what would ultimately become the champion team, although Austria competed and put Mancini’s men in a lot of difficulties, forcing them to reach extra time. After almost a month of rest, Alaba is already working under Ancelotti, with whom he is totally in tune.

Not surprisingly, both have already worked hand in hand on the Italian’s stage at the helm of Bayern Munich, between July 2016 and September 2017. Alaba was the second most used footballer by Carletto at Bayern, only behind Lewandowski, and recently, in statements to the club’s official media, the coach praised the qualities of his recent incorporation: “He is a complete player, who has a lot of quality. He is also very intelligent in defensive tactics. He can play in both positions (central or lateral) and has even played as a midfielder with the Austrian national team. He is a complete player who will surely do very well this season ”.

In the press conference after his presentation, Alaba already stated that the feeling is mutual: “I’m glad to be working with Carlo again, it’s a pleasure. We have an excellent relationship ”. That closeness was clear in training, in which Ancelotti was on top of him to make him feel integrated, waiting for the one that Madrid expects to be their guide to join training: Toni Kroos, with whom he shared a dressing room at Bayern for several years.

Yesterday Alaba was placed in the training rounds with Lucas, Odriozola, Isco, Rodrygo and Odegaard, and in the continuous race sections his main contact with the group was Odriozola, with whom he shared the Bayern dressing room for a few months, between January and June 2020. To work with the team he added an individual physical part to be intoned and after the session he commented on how he had felt: “The training was good, very intense towards the end. It’s good to be able to be with my teammates. I am very happy to be here. He would ask the companions what this and that meant, to use those words and help them on the field. And the facilities are incredible, I already saw them a little yesterday (for Wednesday) and today when I entered my room … It is beautiful ”.

Now Alaba has to integrate into the way Madrid play, as well as in the locker room environment; also reach the point in a suitable way for the official debut in the 2021-22 season, on August 14 in Mendizorroza against Alavés, in what will be the first day of the League for the whites.

The Austrian will not travel (except last minute surprise) to Glasgow this Sunday for the dispute of the first friendly of Madrid this summer (he has played two training matches with Fuenlabrada and Rayo, in Valdebebas) against Rangers; it is expected that he can dress in white for the first time, even in a preparation duel, on Sunday August 8 against Milan at the Wörthersee Stadion in Klagenfurt, Austria, 300 kilometers from his native Vienna. It could even be earlier, if Madrid schedules a friendly for the week of July 26 to August 1, an option that the club is currently working on. For now, the team already has its first new face running around the fields of Real Madrid City.

Alaba’s arrival was strategic for Real Madrid for several reasons: because of his experience at the highest level, because of his age (29 years) and, above all, because of his versatility: the Austrian can develop up to four positions on the field without are strange to him. His natural position is the left back, but Madrid has not signed him to play there, where he already has Mendy, Marcelo and the promising Miguel Gutiérrez.

For now, Alaba confirmed in the press conference of his presentation that he had not demanded to play in any specific position to sign with Madrid. Ancelotti, for his part, knows his qualities and knows that the club wants him as a central defender, to fill the position that Ramos has already left., to which Varane could join if his transfer to United is consummated. In his time at Bayern, Carletto lined Alaba as a winger 40 times and only 11 as a center-back.

Those two are his two main positions, although as a member of his selection he has moved in two other registers with a greater organizing and offensive vocation: as a midfielder and as a left inside. In the Eurocup he started as a center back and ended up as a lane, but in the qualifying phase for the Qatar World Cup he developed mainly as an attacker on the left flank to make room for Ulmer, from Salzburg. Before, for years, he acted as a pure midfielder with Austria; Ancelotti can think of him as Casemiro’s replacement.